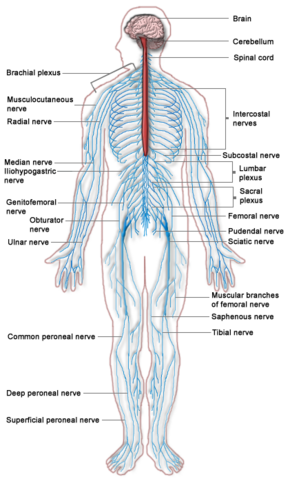 Every living thing interacts with other organisms and its environment. This continuous interaction between an organism and its environment is needed for the organism to survive and grow. It is the somatic nervous system that allows individuals to receive sensory information and consciously react to environmental changes.

In humans, there are 31 pairs of spinal nerves and 12 pairs of cranial nerves.

The 12 pairs of cranial nerves transmit information on the senses of sight, smell, balance, taste, and hearing from special sensory receptors. They also transmit information from general sensory receptors in the body, largely from the head. This information is received and processed by the central nervous system and then the response travels via the cranial nerves to the skeletal muscles to control movements in the face and throat, such as swallowing and smiling (Adam 2001).

From there, acetylcholine is released from the axon terminal knobs of alpha motor neurons and received by postsynaptic receptors (Nicotinic acetylcholine receptors) of muscles, thereby relaying the stimulus to contract muscle fibers. The mechanism of the reflex arc

A reflex arc is an automatic reaction that allows an organism to protect itself reflexively when an imminent danger is perceived. In response to certain stimuli, such as touching a hot surface, these reflexes are "hard wired" through the spinal cord. A reflexive impulse travels up afferent nerves, through a spinal interneuron, and back down appropriate efferent nerves.