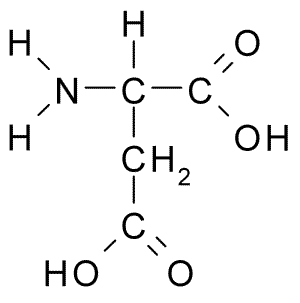 A neurotransmitter is a chemical that relays information across the gap (synapse) between one neuron (nerve cell) and an adjacent neuron or a non-neuron cell (muscle cell, gland cell). The neurotransmitter is released by the axon terminal end of one neuron, in response to an electrical impulse, and travels across the microscopic synapse in milliseconds to the dendrites of the adjacent neuron, where it is recognized by a receptor site. The neurotransmitter either stimulates a continuation of the electrical impulse in the adjoining neuron or inhibits its continuation. Similarly, certain neurotransmitters stimulate muscle cells at a neuromuscular junction, and some stimulate glandular secretions. Examples of neurotransmitters include acetylcholine, dopamine, serotonin, and nitric oxide.

The systems involving neurotransmitters reveal complex coordination—manufacture and transmission of diverse transmitters, selective receptors binding to particular neurotransmitters, means for removing or otherwise deactivating neurotransmitters once they have bound to the receptors, and so forth. In the process, the nerve cells provide a valuable function for the body, while the body provides the necessary nutrients and waste product removal for the health of the cell.

Various drugs, such as heroin, codeine, cocaine, and prozac mimic the effects of naturally occurring neurotransmitters or impact aspects of the system, thus accomplishing their effects.

Neurotransmitters are used to relay, amplify, and modulate electrical signals between a neuron and another cell. According to the prevailing beliefs of the 1960s, a chemical can be classified as a neurotransmitter if it meets the following conditions:

However, there are other materials, such as the zinc ion, that are neither synthesized nor catabolized (i.e., degraded) and are considered neurotransmitters by some. Thus, the old definitions are being revised.

Some more precise divisions are as follows:

The major "workhorse" neurotransmitters of the brain are glutamic acid (glutamate) and amma-aminobutyric acid (GABA).

Discovery and mechanism of action 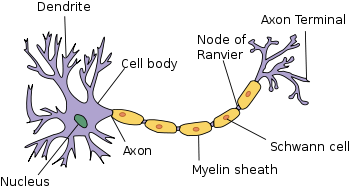 The structure of a typical neuron includes four main components (from left to right): Dendrites, cell body (or soma), axon, and axon terminal.

Austrian scientist Otto Loewi discovered the first transmitter in 1921, during research with the vagus nerve of frog hearts (Chamberlin and Narins 2005). He named this chemical "vagusstoff" but it is now known as acetylcholine.

Most neurons are composed of four main components: A soma, or cell body, which contains the nucleus; one or more dendritic trees that typically receive input; an axon that carries an electric impulse; and an axon terminal that often functions to transmit signals to other cells.

Neurotransmitters are manufactured in a neuron's cell body. They are then transported to the axon terminal, where small-molecule neurotransmitter molecules are usually packaged in small, membrane-bound bags called vesicles. Nitric oxide is an exception, not being contained within a vesicle, but released from the neuron shortly after it is manufactured (Chamberlin and Narins 2005).

When an action potential travels to the synapse, the rapid depolarization causes calcium ion channels to open. Calcium then stimulates the transport of vesicles to the synaptic membrane; the vesicle and cell membrane fuse, leading to the release of the packaged neurotransmitter, a mechanism called exocytosis.

Neuroactive peptides are usually packaged into dense-core vesicles and are released through a similar, but metabolically distinct, form of exocytosis used for small-molecule synaptic vesicles.

A neurotransmitter's effect is determined by its receptor. For example, GABA can act on both rapid or slow inhibitory receptors (the GABA-A and GABA-B receptor respectively). Many other neurotransmitters, however, may have excitatory or inhibitory actions depending on which receptor they bind to.

Neurotransmitters, thus, may cause either excitatory or inhibitory post-synaptic potentials. That is, they may help the initiation of a nerve impulse in the receiving neuron, or they may discourage such an impulse by modifying the local membrane voltage potential. In the central nervous system, combined input from several synapses is usually required to trigger an action potential. Glutamate is the most prominent of excitatory transmitters; GABA and glycine are well-known inhibitory neurotransmitters.

Many neurotransmitters are removed from the synaptic cleft by neurotransmitter transporters in a process called reuptake (or often simply "uptake"). Without reuptake, the molecules might continue to stimulate or inhibit the firing of the postsynaptic neuron. Cells termed astrocytes can remove neurotransmitters from the area. Some, such as norepinephrine, dopamine, and serotonin can be reabsorbed into the neuron's terminal region (Chamberlin and Narins 2005).

Neuroactive peptides are often removed from the cleft by diffusion, and eventually broken down by proteases.

While some neurotransmitters (glutamate, GABA, glycine) are used very generally throughout the central nervous system, others can have more specific effects, such as on the autonomic nervous system (by both pathways in the sympathetic nervous system and the parasympathetic nervous system). The action of yet others are regulated by distinct classes of nerve clusters that can be arranged in familiar pathways around the brain. For example, serotonin is released specifically by cells in the brainstem, in an area called the raphe nuclei, but travels around the brain along the medial forebrain bundle activating the cortex, hippocampus, thalamus, hypothalamus, and cerebellum. Also, it is released in the Caudal serotonin nuclei, so as to have effect on the spinal cord. In the peripherial nervous system (such as in the gut wall), serotonin regulates vascular tone. Dopamine classically modulates two systems: The brain's reward mechanism, and movement control.

Diseases may affect specific neurotransmitter pathways. For example, Parkinson's disease is at least in part related to failure of dopaminergic cells in deep-brain nuclei, for example the substantia nigra. Treatments potentiating the effect of dopamine precursors have been proposed and effected, with moderate success.

Some examples of neurotransmitter action:

It is important to appreciate that it is the receptor that dictates the neurotransmitter's effect.

Various drugs either mimic the effects of naturally occurring neurotransmitters or impact aspects of the system.

For example, heroin and codeine mimic the pain-regulating endorphins, filling their receptors to accomplish their effects (Chamberlin and Narins 2005). Caffeine consumption blocks the effect of adenosine, a transmitter that inhibits brain activity, and thus the consumer of caffeine experiences alertness (Chamberin and Narins 2005). Cocaine blocks the reuptake of dopamine, leaving these neurotransmitters in the synaptic gap longer. Prozac is a serotonin reuptake inhibitor, hence potentiating its effect. AMPT prevents the conversion of tyrosine to L-DOPA, the precursor to dopamine; reserpine prevents dopamine storage within vesicles; and deprenyl inhibits monoamine oxidase (MAO)-B and thus increases dopamine levels.