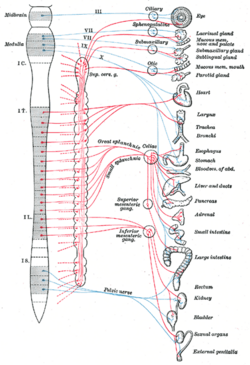 The parasympathetic nervous system uses only acetylcholine (ACh) as its neurotransmitter.

The regions of the body associated with the parasympathetic division of the ANS are in the cranial and sacral regions of the spinal cord. Because of its location, the parasympathetic system is commonly referred to as having craniosacral outflow whereas the sympathetic system is referred to as thoracolumbar outflow (T1-L2 spinal nerves). In the cranium, the PSN originate from cranial nerves CN III (oculomotor nerve), CN VII (facial nerve), CN IX (glossopharyngeal nerve), and CN X (vagus n.) In the sacral region of the body, the PSN is derived from spinal nerves S2, S3, and S4, commonly referred to as the pelvic splanchnics.

Similar to the sympathetic nerves (SN), the PSN follows a two-neuron efferent (motor signals leaving CNS) system that has both preganglionic and postganglionic neurons. In the cranium, preganglionic PSN (CN III, CN VII, and CN IX) arise from specific nuclei in the CNS and synapse at one of four parasympathetic ganglia: ciliary, pterygopalatine, otic, or submandibular. From these four ganglia the PSN complete their journey to target tissues via CN V (trigeminal) branches (ophthalmic nerve CN V1, maxillary nerve CN V2, mandibular nerve CN V3). The vagus nerve does not participate in these cranial ganglion as most of its PSN fibers are destined for a broad array of ganglion on or near organs, including the thoracic viscera (esophagus, trachea, heart, lungs) and abdominal viscera (stomach, pancreas, liver, kidneys) traveling all the way down to the midgut/hindgut junction just before the splenic flexure of the transverse colon. The pelvic splanchnic preganglionic nerve cell bodies arise in the lateral horn of the spinal cord and continue away from the CNS to synapse at a autonomic ganglion. The PSN ganglion, where the preganglionic neurons synapse, will be close to the organ of innervation (unlike the SN where the ganglion is typically farther away from the target organ).

The two neuron system is only for efferent innervation. Afferent, unconscious sensations sent from the viscera to the CNS are done so in a one neuron tract.

The afferent parasympathetic sensations are mostly unconscious visceral motor reflex sensations from hollow organs and glands that are transmitted to the CNS. Like regular somatic sensory neurons, parasympathetic afferent cell bodies are located in the dorsal root ganglion. While the unconscious reflex arcs normally are undetectable, in certain instances, they may send pain sensations to the CNS masked as referred pain. If the peritoneal cavity becomes inflamed, or if the bowel is suddenly distended, your body will interpret the afferent pain stimulus as somatic in origin. This pain is usually non-localized. The pain is also usually referred to dermatomes that are at the same spinal nerve level as the visceral afferent synapse.

Cranial nerve parasympathetic paths and control in the human body

The oculomotor nerve is responsible for several parasympathetic functions related to the eye. The oculomotor PSN fibers originate in the Edinger-Westphal nucleus in the CNS and travel through the superior orbital fissure to synapse in the ciliary ganglion located just behind the orbit (eye). From the ciliary ganglion, the postganglionic PSN fibers leave via short ciliary nerve fibers, a continuation of the nasociliary nerve (a branch of ophthalmic division of the trigeminal nerve, CN V1). The short ciliary nerves innervate the orbit to control the ciliary muscle (responsible for accommodation) and the sphincter pupillae muscle, which is responsible for miosis or constriction of the pupil (in response to light or accommodation) (Netter and Hansen 2003).

The parasympathetic aspect of the facial nerve controls secretion of the sublingual and submandibular salivary glands, the lacrimal gland, and the glands associated with the nasal cavity. The preganglionic fibers originate within the CNS in the superior salvatory nucleus and leave as the intermediate nerve (which some consider a separate cranial nerve altogether) to connect with the facial nerve just distal (further out) to it surfacing the CNS. Just after the facial nerve geniculate ganglion (general sensory ganglion) in the temporal bone, the facial nerve gives off two separate parasympathetic nerves. The first is the greater petrosal nerve and the second is the chorda tympani. The greater petrosal nerve travels through the middle ear and eventually combines with the deep petrosal nerve (sympathetic fibers) to form the nerve of the pterygoid canal. The PSN fibers of the nerve of the pterygoid canal synapse at the pterygopalatine ganglion, which is closely associated with the maxillary division of the trigeminal nerve (CN V2). The postganglioninc PSN fibers leave the pterygopalatine ganglion in several directions. One division leaves on the zygomatic division of CN V2 and travels on a communicating branch to unite with the lacrimal nerve (branch of the ophthalmic nerve of CN V1) before synapsing at the lacrimal gland. These PSN to the lacrimal gland control tear production (Netter and Hansen 2003).

A separate group of PSN leaving from the pterygopalatine ganglion are the descending palatine nerves (CN V2 branch) which include the greater and lesser palatine nerves. The greater palatine PSN synapse on the hard palate and regulate mucus glands located there. The lesser palatine nerve synapses at the soft palate and controls sparse taste receptors and mucus glands. Yet another set of divisions from the pterygopalatine ganglion are the posterior, superior, and inferior lateral nasal nerves; and the nasopalatine nerves (all branches of CN V2, maxillary division of the trigeminal nerve) that bring PSN to glands of the nasal mucosa. The second PSN branch that leaves the facial nerve is the chorda tympani. This nerve carries secretomotor fibers to the submandibular and sublingual glands. The chorda tympani travels through the middle ear and attaches to the lingual nerve (mandibular division of trigeminal, CN V3). After joining the lingual nerve the preganglionic fibers synapse at the submandibular ganglion and send postganglionic fibers to the sublingual and submandibular salivary glands (Netter and Hansen 2003).

The glossopharyngeal nerve, CNIX, has parasympathetic fibers that innervate the parotid salivary gland. The preganglionic fibers depart CNIX as the tympanic nerve and continue to the middle ear where they make up a tympanic plexus on the promontory of the tympanic membrane. The tympanic plexus of nerves rejoin and form the lesser petrosal nerve and exit through the foramen ovale to synapse at the otic ganglion. From the otic ganglion, postganglionic parasympathetic fibers travel with the auriculotemporal nerve (mandibular branch of trigeminal, CN V3) to the parotid salivary gland (Netter and Hansen 2003).

Another nerve that comes off the vagal nerves approximately at the level of entering the thorax are the cardiac nerves. These cardiac nerves go on to form cardiac and pulmonary plexuses around the heart and lungs. As the main vagus nerves continue into the thorax they become intimately linked with the esophagus and sympathetic nerves from the sympathetic trunks to form the esophageal plexus. This is very efficient as the major function of the vagus nerve from there on will be control of the gut smooth muscles and glands. As the esophageal plexus enter the abdomen through the esophageal hiatus anterior and posterior vagal trunks form. The vagal trunks then join with preaortic sympathetic ganglion around the aorta to disperse with the blood vessels and sympathetic nerves throughout the abdomen. The extent of the PSN in the abdomen include the pancreas, kidneys, liver, gall bladder, stomach, and gut tube. The vagal contribution of PSN continues down the gut tube until the end of the midgut. The midgut ends 2/3 of the way across the transverse colon near the splenic flexure (Netter and Hansen 2003).

The pelvic splanchnic nerves, S2-4, work in tandem to innervate the pelvic viscera. Unlike in the cranium, where one PSN is in charge of one particular tissue or region, for the most part the pelvic splanchnics each contribute fibers to pelvic viscera by first traveling to one or more plexuses before being dispersed to the target tissue. These plexuses are composed of mixed autonomic nerve fibers (PSN and SN) and include the vesical, prostatic, rectal, uterovaginal, and inferior hypogastric plexus. The preganglionic neurons in the neurons do not synapse in named ganglion as in the cranium but rather in the walls of the tissues or organs that they innervate. The fiber paths are variable and each individual's autonomic nervous system in the pelvis is unique. The visceral tissues in the pelvis that the PSN control include: Urinary bladder, ureters, urinary sphincter, anal sphincter, uterus, prostate, glands, vagina, and penis. Unconsciously, the PSN will cause peristaltic movements of the ureters helping to move urine from the kidneys into the bladder and move feces down the intestinal tract and upon necessity, the PSN will help you excrete urine from the bladder or defecate. Stimulation of the PSN will cause the detruser muscle (urinary bladder wall) to contract and simultaneously relax the internal sphincter urethrae muscle to relax allowing void of urine. Also, PSN stimulation to the internal anal sphincter will relax this muscle and allow you to have a bowel movement. There are other skeletal muscles involved with these processes but the PSN play a huge role in continence (Moore and Agur 2007).

Another role that the PSN play in the pelvis is in sexual activity. In males, the cavernous nerves from the prostatic plexus stimulate smooth muscle in the fibrous trabeculae of the coiled helicene arteries to relax and allow blood to fill the corpora cavernosum and the corpus spongiosum of the penis, making it rigid to prepare for sexual activity. Upon emission of ejaculate, the sympathetics participate and cause peristalsis of the ductus deferens and closure of the internal urethral sphincter to prevent semen from entering the bladder. At the same time, parasympathetics cause peristalsis of the urethral muscle, and the pudendal nerve causes contraction of the bulbospongiosus (skeletal muscle is not via PSN), to forcibly emit the semen. During remission the penis becomes flaccid again. In the female, there is erectile tissue analogous to the male yet less substantial that plays a large role in sexual stimulation. The PSN cause release of secretions in the female that decrease friction. Also in the female, the parasympathetics innervate the fallopian tubes, which helps peristaltic contractions and movement of the oocyte to the uterus for implantation. The secretions from the female genital tract aids in semen migration. The PSN (and SN to a lesser extent) play a huge role in reproduction (Moore and Agur 2007).

The parasympathetic nervous system uses only acetylcholine (ACh) as its neurotransmitter, although other peptides (such as cholecystokinin) may act on the PSNS as a neurotransmitter (Wank 1995; Takai et al. 1998). The ACh acts on two types of receptors, the muscarinic and nicotinic cholinergic receptors. Most transmissions occur in two stages: When stimulated, the preganglionic nerve releases ACh at the ganglion, which acts on nicotinic receptors of postganglionic neurons. The postganglionic nerve then releases ACh to stimulate the muscarinic receptors of the target organ.

The main types of muscarinic receptors that are well characterized are:

Retrieved from https://www.newworldencyclopedia.org/p/index.php?title=Parasympathetic_nervous_system&oldid=970638
Categories:
Hidden category:
This page was last edited on 30 June 2013, at 18:15.
Content is available under Creative Commons Attribution/Share-Alike License; additional terms may apply. See Terms of Use for details.