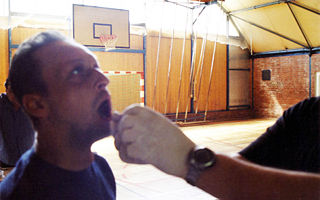 Taking a saliva sample for testing

Saliva is complex fluid, of watery or viscous consistency, produced in and secreted from the major and minor salivary glands in the mouths of humans and most other animals. Depending on the species, it provides digestive, protective, and lubricative functions. Some swifts use their gummy saliva to build their nests, and some Aerodramus swiftlet nests are made only from saliva (and used to make bird's nest soup) (Marcone 2005). Cobras, vipers, and certain other members of the venom clade hunt with venomous saliva injected by fangs. Some arthropods, such as spiders and caterpillars, create thread from salivary glands.

Human saliva exhibits a remarkable complexity that harmonizes with various systems and structures of the body. It has diverse chemicals that break down foods, protects teeth and remineralizes the surface of teeth, inhibits precipitation of calcium and phosphate on intact tooth surfaces, promotes healing of the oral mucosa (lining of the mouth), and kills bacteria, fungi, and viruses. Saliva even enhances taste. Lack of sufficient saliva may result in increased dental disease, disease of the oral mucosa, and difficulty in chewing, speaking, and swallowing. And the output of saliva coordinates with the need for this fluid, being increased during eating and virtually zero while asleep.

As part of the initial process of food digestion, the enzymes in saliva break down some of the starch and fat in the food at the molecular level. Saliva also breaks down food caught in the teeth. Furthermore, saliva lubricates and protects the teeth, the tongue, and the tender tissues inside the mouth. Saliva also assists in swallowing by moistening ingested food, has proteins that provide a barrier against bacteria, fungi, and viruses, and has anti-micobrial substances that likewise protect the body. Saliva even contributes to taste by dissolving sapid substances in food and making them more accessible to taste buds (Orchardson 2001).

The digestive functions of saliva include breaking down components of food, moistening food, and helping to create a food bolus, so it can be swallowed easily. Human saliva contains the enzyme amylase that breaks some starches down into maltose and dextrin. Thus, digestion of food occurs within the mouth, even before food reaches the stomach. Salivary glands also secrete enzymes (salivary lipase) to start fat digestion (Maton et al. 1993). By lubricating the oral tissues, it is easier to chew, and by moistening the ingested food and helping to bind it into a bolus (compact mass), it is more suitable for swallowing. In addition, saliva dissolves sapid substances, making them assessable to the taste buds, and thus contributing to taste (Orchardson 2001).

Saliva helps to protect oral tissues by moistening them and proline-rich proteins in the saliva coat the teeth with a thin layer (pellicle) that provides a protective barrier on the surface of the teeth (Orchardson 2001). The supersaturated calcium and phosphate ions in saliva, which are in balace with the minerals in the teeth, can diffuse into the pellicle and reverse the early stages of tooth decay, and statherins and proline-rich proteings in salavie inhibit mineralization that would result in precipitation of calcium and phosphate on tooth surfaces (Orchardson 2001). Insufficient salivary flow can increase incidence of dental disease (dental caries and periodontal disease) and disease of the oral mucosa (Orchardson 2001).

Saliva also contains growth factors that promote healing of the oral mucosa, and contains various antimicrobial substances, including lysozyme, lactoferrin, histatins, and specific antibodies, such as secretory immunoglobin A, which binds to bacterial antigens. A common belief is that saliva contained in the mouth has natural disinfectants, which leads people to believe it is beneficial to "lick their wounds." Researchers at the University of Florida at Gainesville have discovered a protein called nerve growth factor (NGF) in the saliva of mice. Wounds doused with NGF healed twice as fast as untreated and unlicked wounds; therefore, saliva can help to heal wounds in some species. NGF has not been found in human saliva; however, researchers find human saliva contains such antibacterial agents as secretory IgA, lactoferrin, and lactoperoxidase. It has not been shown that human licking of wounds disinfects them, but licking is likely to help clean the wound by removing larger contaminants such as dirt and may help to directly remove infective bodies by brushing them away. Therefore, licking would be a way of wiping off pathogens, useful if clean water is not available to the animal or person.

The mouth of animals is the habitat of many bacteria, some pathogenic. Some diseases, such as herpes, can be transmitted through the mouth. Animal (including human) bites are routinely treated with systemic antibiotics because of the risk of septicemia.

Saliva prevents the drying of the oral mucosa. If saliva flow is too low, xerostomia, or dry mouth, may result, which will make normal functions such as swallowing, chewing, and speaking difficult (Orchardson 2001). Such a dry mouth creates a sensation of thirst. As noted above, the moistening of the oral mucosa also has a protective purpose.

Saliva is an effective cleaning agent used in art conservation. Cotton swabs coated with saliva are rolled across a paintings surface to delicately remove thin layers of dirt that may accumulate (Gavett 2008).

Saliva typically in humans is stimulated by the physical activity of chewing, or even by the thought of food; olfactory stimuli have little effect, although irritants such as spices can elicit flow (Orchardson 2001).