Salicylic acid is a crystalline, solid (up to 159oC) organic acid that is used to make aspirin and various pharmaceutical products. It also functions as a plant hormone.

The name salicylic acid derives from the Latin word for the willow tree (Salix), from whose bark it can be obtained (Mackowiak 2000). Originally recognized in ancient times for its natural medicinal properties (reducing pain, fever, swelling, etc.), in the hands of human creativity, salicylic acid was used to produce aspirin, many skin-care products (for the treatment of acne, psoriasis, calluses, dandruff, warts, sunburn, etc.), stomach relief medicine, an antiseptic in toothpaste, food preservatives, flavoring, and dyes. While many of these addressed external needs (to support people's physical life, such as the reduction of heart attacks via aspirin), many also addressed the human internal desire to seek or express beauty.

The chemical formula for salicyclic acid is C6H4(OH)CO2H.

Salicylic acid is both a caroxylic acid and a phenol. A carboxylic acid is an organic (carbon-containing) acid characterized by the presence of a carboxyl group, which has the formula -C(=O)OH, usually written -COOH or -CO2H. A phenol, in the general sense of the term, is any compound which contains a six-membered aromatic ring, bonded directly to a hydroxyl group (-OH).

In salicylic acid, the OH group is adjacent to the carboxyl group.

Salicylic acid is only slightly soluble in water, but is soluble in ethanol and ether.

To produce aspirin, salicylic acid is then acetylated using acetic anhydride, yielding aspirin and acetic acid as a byproduct. By using a process involving the esterification of the phenolic hydroxyl group of salicylic acid, it retains some of its potency as an analgesic while reducing its acidity. 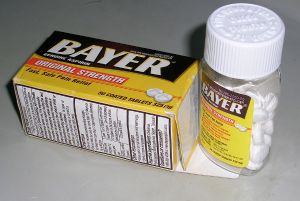 One of the key uses of salicylic acid is for the production of aspirin. Aspirin, or acetylsalicylic acid, is a drug often used as an analgesic (against minor pains and aches), antipyretic (against fever), and anti-inflammatory (against localized redness, swelling, heat, and pain). It has also an anticoagulant ("blood-thinning") effect and is used in long-term low-doses to prevent heart attacks.

The medicinal properties of salicylate (mainly for fever relief) have been known since ancient times. The substance occurs in the bark of willow trees. Hippocrates, a Greek physician, wrote in the fifth century B.C.E. about a bitter powder extracted from willow bark that could ease aches and pains and reduce fevers. This remedy is also mentioned in texts from ancient Sumeria, Egypt, and Assyria. Native Americans claim to have used it for headaches, fever, sore muscles, rheumatism, and chills. The Reverend Edward Stone, a vicar from Chipping Norton, Oxfordshire, England, noted in 1763 that the bark of the willow was effective in reducing a fever.

The active extract of the bark, called salicin, was isolated to its crystalline form in 1828 by Henri Leroux, a French pharmacist, and Raffaele Piria, an Italian chemist, who then succeeded in separating out the acid in its pure state. Salicin is highly acidic when in a saturated solution with water (pH = 2.4), and is called salicylic acid for that reason. This chemical was also isolated from meadowsweet flowers (genus Filipendula, formerly classified in Spiraea) by German researchers in 1839. 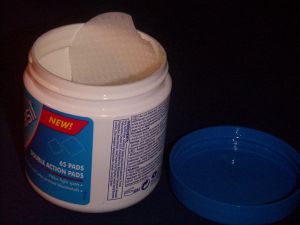 Cotton pads soaked in salicylic acid can be used to chemically exfoliate skin.

Also known as 2-hydroxybenzoic acid (one of several beta hydroxy acids), salicylic acid is the key additive in many skin-care products for the treatment of acne, psoriasis, calluses, corns, and keratosis pilaris. It treats acne by causing skin cells to slough off more readily, preventing pores from clogging up. This effect on skin cells also makes salicylic acid an active ingredient in several shampoos meant to treat dandruff. Salicylic acid is also used as an active ingredient in gels that remove verrucas (plantar warts).

Use of straight salicylic solution may cause hyperpigmentation on unpretreated skin for those with darker skin types (Fitzpatrick phototypes IV, V, VI), as well as with the lack of use of a broad spectrum sunblock (Grimes 1999, Roberts 2004).

Toxicological effects of 100 percent salicylic acid, however, are mostly harmful. It is harmful by ingestion, inhalation, and through skin absorption. It acts as an irritant, and chronic effects have shown 100 percent salicylic acid to cause DNA damage, and also cause allergic reactions after repeated exposure. This is why most acne treatment medications use a percent range of two to five in solution.

While salicylic acid is toxic if ingested in large quantities, in small quantities is used as a food preservative and antiseptic in toothpaste. For some people with salicylate sensitivity, even these small doses can be harmful.

Retrieved from https://www.newworldencyclopedia.org/p/index.php?title=Salicylic_acid&oldid=990051
Categories:
This page was last edited on 13 August 2015, at 14:58.
Content is available under Creative Commons Attribution/Share-Alike License; additional terms may apply. See Terms of Use for details.