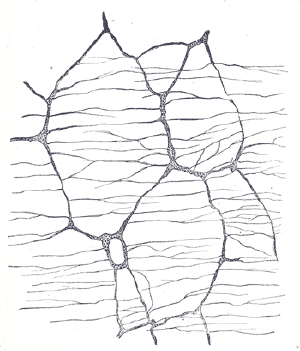 The myenteric plexus from the rabbit, x 50

The enteric nervous system (ENS) is that part of the peripheral nervous system of vertebrates that plays a fundamental role in control of the gastrointestinal system. It is responsible for the behavior of the bowel, as well as regulating intestinal blood supply and other digestive functions.

The study of the enteric nervous system is known as neurogastroenterology.

Did you know?
The enteric nervous system has been called "the second brain" or the gut brain 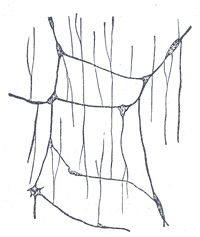 The plexus of the submucosa from the rabbit, x 50

Two of the major structural components of the myenteric plexus (of Auerobach) and the submucosal plexus (of Meissner). The neurons of the enteric nervous system are collected into these two types of ganglia (tissue mass).

Myenteric plexus. The myenteric plexus or Auerbach's plexus is large, found throughout the gastrointestinal tract, and lies between the longitudinal and circular layers of muscularis externa. It provides motor innervation to both layers and secretomotor innervation to the mucosa, having both parasympathetic and sympathetic input. The myenteric plexus arises from cells in the Nucleus ala cinerea, the parasympathetic nucleus of origin for the tenth cranial nerve (Vagus), located in the medulla oblongata. The fibers are carried by both the anterior and posterior vagal nerves. It is found in the muscles of the esophagus, stomach, and intestine (Stedman's 2005).

The nerves of the small intestines are derived from the plexuses of parasympathetic nerves around the superior mesenteric artery. From this source they run to the myenteric plexus (Auerbach's plexus) of nerves and ganglia situated between the circular and longitudinal muscular fibers from which the nervous branches are distributed to the muscular coats of the intestine. From this a secondary plexus, the plexus of the submucosa (Meissner's plexus, Submucous plexus, submucosal plexus) is derived,

There are a wide variety of connecting fibers that link the enteric nervous system with the rest of the nervous system, including vagal connections that provide a sensory link for physiological information and sympathetic unmyelinated C fibers for sensations of visceral pain (Hopley and van Schalkwyk 2006).

Serotonin is one of the main neurotransmitters in the enteric nervous systems (Hopley and van Schalkwyk 2006).

Disorders of the enteric nervous system

Many diseases can alter function in the enteric nervous systems. Among the most important are diabetic autonomic neuropathy (which results in gastroparesis, or autovagotomy, as well as colonic movement disorders, such as nocturnal diarrhea); infectious diarrhea; and schleroderma(a chronic autoimmune disease characterized by a hardening or sclerosis). Central nervous system diseases such as Parkinson's and Alzheimers disease also affect the bowel. Among many other disorders that can have dysfunction of the enteric nervous system as a component are amyloidosis, prophyria, Chagras disease, mitrochondrial cytopathies, post-infectiouis irritable blowel syndrome, and domoic acid (seafood) poisoning (Hopley and van Schalkwyk 2006).

A patient with Parkinson's disease frequently shows lewy bodies in the patient's bowels, and a patient with Alzheimer's disease frequently shows in his or her bowels the amyloid plaques together with neuorfibrillary tangles characteristic of that disorder. This offers the possibility that a bowel biopsy will be able to diagnosis Alzheimer's disease in the future. Glial cells damage is seen in necrotizing enterocolitis and Crohn's disease (Hopley and van Schalkwyk 2006).

There is evidence that selective neurodegeneration may occur in the ageing enteric nervous system and that age-associated changes in intestinal innervation may be a factor in the gastrointestinal disorders that increase in frequency in the elderly, such as constipation, dysphagia, and gastrointestinal reflux (Saffrey 2004).