In thermodynamics and molecular chemistry, the enthalpy or heat content (denoted as H, h, or rarely as χ) is a quotient or description of thermodynamic potential of a system, which can be used to calculate the "useful" work obtainable from a closed thermodynamic system under constant pressure and entropy.

The term enthalpy was composed of the prefix en-, meaning to "put into" and the Greek word -thalpein, meaning "to heat," although the original definition is thought to have stemmed from the word "enthalpos" (ἐνθάλπος).[1]

Over the history of thermodynamics, several terms have been used to denote what is now known as the enthalpy of a system. Originally, it was thought that the word "enthalpy" was created by Benoit Paul Émile Clapeyron and Rudolf Clausius through the publishing of the Clausius-Clapeyron relation in The Mollier Steam Tables and Diagrams in 1827, but it was later published that the earliest recording of the word was in 1875, by Josiah Willard Gibbs in the publication Physical Chemistry: an Advanced Treatise,[2] although it is not referenced in Gibbs' works directly.[3] In 1909, Keith Landler discussed Gibbs' work on the 'heat function for constant pressure' and noted that Heike Kamerlingh Onnes had coined its modern name from the Greek word "enthalpos" (ενθαλπος) meaning "to put heat into."[1]

This is the heat change which occurs when 1 mol of a substance reacts completely with oxygen to form products at 298 K and 1 atm. The function H was introduced by the Dutch physicist Kamerlingh Onnes in the early twentieth century in the following form:

where E represents the energy of the system. In the absence of an external field, the enthalpy may be defined, as it is generally known, by:

where (all units given in SI)

In terms of thermodynamics, enthalpy can be calculated by determining the requirements for creating a system from "nothingness"; the mechanical work required,

differs, based upon the constancy of conditions present at the creation of the thermodynamic system.

, must be supplied to remove particles from a surrounding in order to allow space for the creation of a system, providing that environmental variables, such as pressure (

) remain constant. This internal energy also includes the energy required for activation and the breaking of bonded compounds into gaseous species.

This process is calculated within enthalpy calculations as

, to label the amount of energy or work required to "set aside space for" and "create" the system; describing the work done by both the reaction or formation of systems, and the surroundings. For systems at constant pressure, the change in enthalpy is the heat received by the system plus the non-mechanical work that has been done.

Therefore, the change in enthalpy can be devised or represented without the need for compressive or expansive mechanics; for a simple system, with a constant number of particles, the difference in enthalpy is the maximum amount of thermal energy derivable from a thermodynamic process in which the pressure is held constant.

is the work required to displace the surrounding atmosphere in order to vacate the space to be occupied by the system.

Where, as defined by the law;

represents the infinitesimal increase of the systematic or internal energy.

represents the infinitesimal amount of energy attributed or added to the system.

represents the infinitesimal amount of energy acted out by the system on the surroundings.

As a differential expression, the value of H can be defined as[4]

For a process that is not reversible, the above equation expressing dH in terms of dS and dP still holds because H is a thermodynamic state variable that can be uniquely specified by S and P. We thus have in general:

It is seen that, if a thermodynamic process is isobaric (i.e., occurs at constant pressure), then

is zero and thus

The difference in enthalpy is the maximum thermal energy attainable from the system in an isobaric process. This explains why it is sometimes called the heat content. That is, the integral of

over any isobar in state space is the maximum thermal energy attainable from the system.

In a more general form, the first law describes the internal energy with additional terms involving the chemical potential and the number of particles of various types. The differential statement for

is the chemical potential for an i-type particle, and

is the number of such particles. It is seen that, not only must the

term be set to zero by requiring the pressures of the initial and final states to be the same, but the

terms must be zero as well, by requiring that the particle numbers remain unchanged. Any further generalization will add even more terms whose extensive differential term must be set to zero in order for the interpretation of the enthalpy to hold.

ΔH  is the enthalpy change

Although enthalpy is commonly used in engineering and science, it is impossible to measure directly, as enthalpy has no datum (reference point). Therefore enthalpy can only accurately be used in a closed system. However, few real world applications exist in closed isolation, and it is for this reason that two or more closed systems cannot be compared using enthalpy as a basis, although sometimes this is done erroneously. 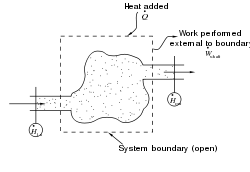 During steady, continuous operation, an energy balance applied to an open system equates shaft work performed by the system to heat added plus net enthalpy added.

The region of space enclosed by open system boundaries is usually called a control volume, and it may or may not correspond to physical walls. If we choose the shape of the control volume such that all flow in or out occurs perpendicular to its surface, then the flow of matter into the system performs work as if it were a piston of fluid pushing mass into the system, and the system performs work on the flow of matter out as if it were driving a piston of fluid. There are then two types of work performed: flow work described above which is performed on the fluid (this is also often called

work) and shaft work which may be performed on some mechanical device.

These two types of work are expressed in the equation:

Substitution into the equation above for the control volume cv yields:

The definition of enthalpy, H, permits us to use this thermodynamic potential to account for both internal energy and

work in fluids for open systems:

During steady-state operation of a device (see turbine, pump, and engine), the expression above may be set equal to zero. This yields a useful expression for the power generation or requirement for these devices in the absence of chemical reactions:

This expression is described by the diagram above.

The specific enthalpy of a working mass is a property of that mass used in thermodynamics, defined as

where u is the specific internal energy, p is the pressure, and v is specific volume. In other words,

is the mass of the system. The SI unit for specific enthalpy is joules per kilogram.