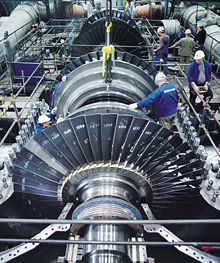 A Siemens steam turbine with the case opened.

A turbine is a rotary engine that extracts energy from a fluid flow. The simplest turbines have one moving part, a rotor assembly, which is a shaft with blades attached. Moving fluid acts on the blades (or the blades react to the flow), so that they rotate and impart energy to the rotor. Gas, steam, and water turbines have a casing around the blades that contains and controls the working fluid. Examples of early turbine are windmills and water wheels.

Turbines are often part of a larger machine. Nearly all of the electrical power humans generate and consume is produced with a turbine of some type. Most jet engines rely on turbines to supply mechanical work from their working fluid and fuel, as do all nuclear ships and power plants.

Did you know?
The term "turbine" comes from the Latin "turbo" which means vortex

Claude Burdin (1788-1873) coined the term turbine from the Latin word turbo, meaning "vortex," during an 1828 engineering competition. Benoit Fourneyron (1802-1867), a student of Claude Burdin, built the first practical water turbine. Credit for invention of the modern steam turbine is given to British Engineer Sir Charles Parsons (1854 - 1931).

A device similar to a turbine but operating in reverse is a compressor or pump. The axial compressor in many gas turbine engines is a common example. 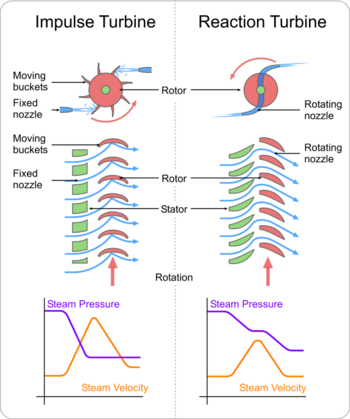 A working fluid contains potential energy (pressure head) and kinetic energy (velocity head). The fluid may be compressible or incompressible. Several physical principles are employed by turbines to collect this energy:

Impulse turbines
These turbines change the direction of flow of a high velocity fluid jet. The resulting impulse spins the turbine and leaves the fluid flow with diminished kinetic energy. There is no pressure change of the fluid in the turbine rotor blades. Before reaching the turbine the fluid's pressure head is changed to velocity head by accelerating the fluid with a nozzle. Pelton wheels and de Laval turbines use this process exclusively. Impulse turbines do not require a pressure casement around the runner since the fluid jet is prepared by a nozzle prior to reaching turbine. Newton's second law describes the transfer of energy for impulse turbines.

Reaction turbines
These turbines develop torque by reacting to the fluid's pressure or weight. The pressure of the fluid changes as it passes through the turbine rotor blades. A pressure casement is needed to contain the working fluid as it acts on the turbine stage(s) or the turbine must be fully immersed in the fluid flow (wind turbines). The casing contains and directs the working fluid and, for water turbines, maintains the suction imparted by the draft tube. Francis turbines and most steam turbines use this concept. For compressible working fluids, multiple turbine stages may be used to harness the expanding gas efficiently. Newton's third law describes the transfer of energy for reaction turbines.

Turbine designs will use both these concepts to varying degrees whenever possible. Wind turbines use an airfoil to generate lift from the moving fluid and impart it to the rotor (this is a form of reaction). Wind turbines also gain some energy from the impulse of the wind, by deflecting it at an angle. Crossflow turbines are designed as an impulse machine, with a nozzle, but in low head applications maintain some efficiency through reaction, like a traditional water wheel. Turbines with multiple stages may utilize either reaction or impulse blading at high pressure. Steam Turbines were traditionally more impulse but continue to move towards reaction designs similar to those used in Gas Turbines. At low pressure the operating fluid medium expands in volume for small reductions in pressure. Under these conditions (termed Low Pressure Turbines), blading becomes strictly a reaction type design with the base of the blade solely impulse. The reason is due to the effect of the rotation speed for each blade. As the volume increases, the blade height increases, and the base of the blade spins at a slower speed relative to the tip. This change in speed forces a designer to change from impulse at the base, to a high reaction style tip.

Classical turbine design methods were developed in the mid-nineteenth century. Vector analysis related the fluid flow with turbine shape and rotation. Graphical calculation methods were used at first. Formulas for the basic dimensions of turbine parts are well documented and a highly efficient machine can be reliably designed for any fluid flow condition. Some of the calculations are empirical or "rule of thumb" formulae, and others are based on classical mechanics. As with most engineering calculations, simplifying assumptions were made.

The turbine pressure ratio is a function of

and the turbine efficiency.

Modern turbine design carries the calculations further. Computational fluid dynamics dispenses with many of the simplifying assumptions used to derive classical formulas and computer software facilitates optimization. These tools have led to steady improvements in turbine design over the last forty years.

The primary numerical classification of a turbine is its specific speed. This number describes the speed of the turbine at its maximum efficiency with respect to the power and flow rate. The specific speed is derived to be independent of turbine size. Given the fluid flow conditions and the desired shaft output speed, the specific speed can be calculated and an appropriate turbine design selected.

The specific speed, along with some fundamental formulas can be used to reliably scale an existing design of known performance to a new size with corresponding performance.

Off-design performance is normally displayed as a turbine map or characteristic.

Almost all electrical power on Earth is produced with a turbine of some type. Very high efficiency turbines harness about 40 percent of the thermal energy, with the rest exhausted as waste heat.

Most jet engines rely on turbines to supply mechanical work from their working fluid and fuel as do all nuclear ships and power plants.

Turbines are often part of a larger machine. A gas turbine, for example, may refer to an internal combustion machine that contains a turbine, ducts, compressor, combustor, heat-exchanger, fan and (in the case of one designed to produce electricity) an alternator. However, it must be noted that the collective machine referred to as the turbine in these cases is designed to transfer energy from a fuel to the fluid passing through such an internal combustion device as a means of propulsion, and not to transfer energy from the fluid passing through the turbine to the turbine as is the case in turbines used for electricity provision, among other uses.

Reciprocating piston engines such as aircraft engines can use a turbine powered by their exhaust to drive an intake-air compressor, a configuration known as a turbocharger (turbine supercharger) or, colloquially, a "turbo."

Turbines can have very high power density (that is, the ratio of power to weight, or power to volume). This is because of their ability to operate at very high speeds. The Space Shuttle's main engines use turbopumps (machines consisting of a pump driven by a turbine engine) to feed the propellants (liquid oxygen and liquid hydrogen) into the engine's combustion chamber. The liquid hydrogen turbopump is slightly larger than an automobile engine (weighing approximately 700 lb) and produces nearly 70,000 hp (52.2 MW).

Turboexpanders are widely used as sources of refrigeration in industrial processes.

Turbines could also be used as powering system for a remote controlled plane that creates thrust and lifts the plane off the ground. They come in different sizes and could be as small as soda can, still be strong enough to move objects with a weight of 100 kg.

An emerging renewable energy technology is the shrouded tidal turbine enclosed in a venturi shaped shroud or duct producing a sub atmosphere of low pressure behind the turbine, allowing the turbine to operate at higher efficiency (than the Betz limit[1] of 59.3 percent) and typically 3 times higher power output[2] than a turbine of the same size in free stream. A downstream low pressure draws upstream flow into the inlet of the shroud from well outside the inlet of the shroud. This flow is drawn into the shroud and concentrated. This augmentation of flow velocity corresponds to a 3-4 fold increase in energy available to the turbine. Therefore a turbine located in the throat of the shroud is then able to achieve higher efficiency, and an output 3-4 times the energy the turbine would be capable of if it were in open or free stream. For this reason, shrouded turbines are not subject to the properties of the Betz limit.

Considerable commercial interest has been shown in recent times in shrouded tidal turbines as it allows a smaller turbine to be used at sites where large turbines are restricted. Arrayed across a seaway or in fast flowing rivers shrouded tidal turbines are easily cabled to a terrestrial base and connected to a grid or remote community. Alternatively, the property of the shroud that produces an accelerated flow velocity across the turbine allows tidal flows formerly too slow for commercial use to be utilized for commercial energy production.

While the shroud may not be practical in wind, as a tidal turbine it is gaining more popularity and commercial use. A shrouded tidal turbine is mono directional and constantly needs to face upstream in order to operate. It can be floated under a pontoon on a swing mooring, fixed to the seabed on a mono pile and yawed like a wind sock to continually face upstream. A shroud can also be built into a tidal fence increasing the performance of the turbines.

Cabled to the mainland they can be grid connected or can be scaled down to provide energy to remote communities where large civil infrastructures are not viable. Similarly to tidal stream open turbines they have little if any environmental or visual amenity impact.