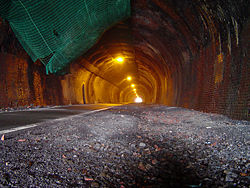 A disused railway tunnel now converted to pedestrian and bicycle use, near Houyet, Belgium

A tunnel is an underground passage. In general, tunnels are at least twice as long as they are wide and are completely enclosed on all sides, save for the openings at each end.

A tunnel may be used by pedestrians, cyclists, motor vehicles, or rail traffic. A tunnel may also be used for a canal or a flow of water—for consumption, for hydroelectric purposes, or for sewers— or it may carry other utility services such as telecommunication cables or steam pipes. Some tunnels are designed as wildlife crossings. The Cu Chi Tunnels of Vietnam are a vast underground network once used by Vietnamese fighters as secret residences and means of escape.

Historically, tunnels have played an important role in facilitating commerce and travel between points separated by mountains, rivers, bays, and even straits. Improvements in tunnel boring machines permitted the construction in the twentieth century of such undersea tunnels as the Channel Tunnel connecting England and France and the Seikan Tunnel, the longest undersea railroad tunnel in the world at 53 kilometers (33 miles), connecting the Japanese islands of Hokkaido and Honshu. Above ground, similar technology has been used, for example, in boring the pair of 28.4 kilometers (17 miles) Guadarrama tunnels completed in 2007 for carrying high-speed rail traffic between the Spanish cities of Madrid and Valladolid. 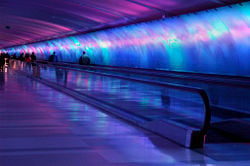 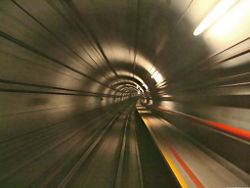 An increasingly necessary interdependence compels human beings toward the construction of more long tunnels both above ground and below the sea to advance human unity as one global family exchanging and sharing agricultural and manufactured products, resources, energy, services, and knowledge. In coming decades the tunnel may see its penultimate fulfillment in connecting the continent of Eurasia with both Africa and North America as there are major initiatives underway toward constructing tunnels under both the Strait of Gibraltar and the Bering Strait. Such efforts can be invaluable for bringing the ideals and challenges of global peacemaking into sharper focus and real juxtaposition.

Choice of tunnels vs. bridges

For water crossings, a tunnel is generally more costly to construct than a bridge. However, navigational considerations may limit the use of high bridges or drawbridge spans when intersecting with shipping channels at some locations, necessitating use of a tunnel. Additionally, bridges usually require a larger footprint on each shore than tunnels; in areas with particularly expensive real estate, such as Manhattan and urban Hong Kong, this is a strong factor in favor of tunnels. Boston's Big Dig project replaced elevated roadways with a tunnel system in order to increase traffic capacity, hide traffic, reclaim land, redecoration, and reunite the city with the waterfront.

Examples of water-crossing tunnels built instead of bridges include the Holland Tunnel and Lincoln Tunnel between New Jersey and Manhattan in New York City, and the Elizabeth River tunnels between Norfolk and Portsmouth, Virginia and the Westerscheldetunnel, Zeeland, Netherlands.

Other reasons for choosing a tunnel instead of a bridge are aesthetic reasons (i.e. preserve the above-ground view, landscape, and scenery) and also for weight capacity reasons (it may be more feasible to build a tunnel than a sufficiently strong bridge). Some water crossings are a mixture of bridges and tunnels, such as the Oresund Bridge that links Denmark to Sweden and the Chesapeake Bay Bridge-Tunnel in the eastern United States. Gotthard Base Tunnel under construction 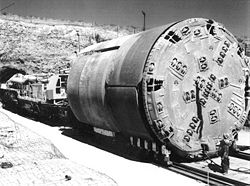 A tunnel boring machine that was used at Yucca Mountain, Nevada

Tunnels are dug in various types of materials, from soft clays to hard rocks, and the method of excavation heavily depends on the ground conditions.

Cut-and-cover is a simple method of construction for shallow tunnels where a trench is excavated and roofed over. Strong supporting beams are necessary to avoid the danger of the tunnel collapsing.

Shallow tunnels are often of the cut-and-cover type (if under water, of the immersed-tube type), while deep tunnels are excavated, often using a tunneling shield. For intermediate levels, both methods are possible.

Tunnel-boring machines (TBMs) can be used to automate the entire tunneling process. There are a variety of TBMs that can operate in a variety of conditions. One type of TBM, called an earth-pressure balance machine, can be used deep below the water table. This pressurizes the cutter head with air or another fluid in order to balance the water pressure. As a result operators of the TBM must go through decompression chambers, much like divers.

Until recently the biggest TBM built was used to bore the Green Heart Tunnel (Dutch: Tunnel Groene Hart) as part of the HSL-Zuid in the Netherlands. Its diameter is 14.87 meters.[1]

Currently there are four even larger machines: two for the M30 ringroad in Madrid, Spain; two for the Chong Ming tunnels in Shanghai, China. These machines are 15.2 meters and 15.4 meters in diameter, respectively.[2]

The New Austrian Tunneling Method (NATM) was developed in the 1960s. The main idea of this method is to use the geological stress of the surrounding rock mass to stabilize the tunnel itself. Based on geotechnical measurements, an optimal cross section is computed. The excavation is immediately protected by thin shotcrete, just behind the excavation. This creates a natural load-bearing ring, which minimizes the rock's deformation.

By special monitoring the NATM method is very flexible, even at surprising changes of the geomechanical rock consistency during the tunneling work. The measured rock properties lead to appropriate tools for tunnel strengthening. In the last decades also soft ground excavations up to 10 kilometers became more common.

Pipe Jacking, also known as pipejacking or pipe-jacking, is a method of tunnel construction where hydraulic jacks are used to push specially made pipes through the ground behind a tunnel boring machine or shield.

There are also several approaches to underwater tunnels, for instance an immersed tube, as in Sydney Harbor.

Other tunneling methods include:

The twenty-first century is likely to see the arrival of tunnels connecting continents: the Strait of Gibraltar tunnel connecting Western Europe and Africa and the Bering Strait tunnel connecting Asia and North America. Construction of the tunnels can bring a new focus to peace efforts as unprecedented levels of international cooperation will be required for the success of such ventures.

The Bering Strait tunnel project especially will require breakthrough levels of peaceful cooperation between key countries in order to realize the huge potential economic benefits to be achieved by linking the two hemispheres heartland to heartland. Fulfilling the Bering Strait tunnel's purpose will require that it be connected by proper railways and roads to existing transportation infrastructure in Asia and North America.

Planning for the Bering Strait project is underway by groups in Russia, the U.S. and Korea. Looking beyond railways, some planners are envisioning a set of tunnels serving as the transit locus for a multipurpose "peace" corridor conveying freight, information, power, passengers, and resources. 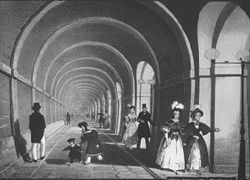