A bridge is a structure built to span a gorge, valley, road, railroad track, body of water, or other physical obstacle. The design and structure of a bridge depends on its function and the nature of the terrain where the bridge is to be constructed. 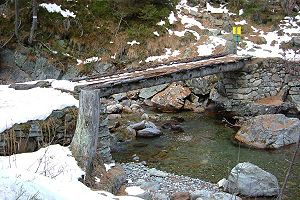 A log bridge in the French Alps near Vallorcine.

The Oxford English Dictionary traces the origin of the word bridge to an Old English word brycg, of the same meaning, derived from a hypothetical Proto-Germanic root brugjō. There are cognates in other Germanic languages (for instance Brücke in German, brug in Dutch, brúgv in Faroese or bro in Danish, Norwegian and Swedish).

The first bridges were spans made of wooden logs or planks and eventually stones, using a simple support and crossbeam arrangement. Most of these early bridges were very poorly built and could rarely support heavy weights. It was this inadequacy which led to the development of better bridges. The arch was first used by the Roman Empire for bridges and aqueducts, some of which still stand today. These arch based bridges could stand in conditions that would previously have swept any bridge away. 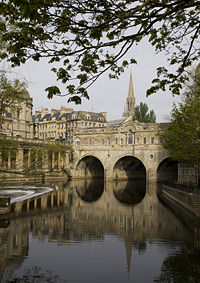 An English eighteenth-century example of a bridge in the Palladian style, with shops on the span: Pulteney Bridge, Bath.

An example is the Alcántara Bridge, built over the river Tagus, near Portugal. Most earlier bridges would have been swept away by the strong current. The Romans also used cement, which reduced the variation of strength found in natural stone. One type of cement, called pozzolana, consisted of water, lime, sand, and volcanic rock. Brick and mortar bridges were built after the Roman era, as the technology for cement was lost then later rediscovered.

Although large Chinese bridges existed in wooden construction since the ancient Warring States, the oldest surviving stone bridge in China is the Zhaozhou Bridge, built from 595 to 605 C.E. during the Sui Dynasty. This bridge is also historically significant as it is the world's oldest open-spandrel stone segmental arch bridge. European segmental arch bridges date back to at least the Alconétar Bridge (approximately second century C.E.), while the enormous Roman era Trajan's Bridge (105 C.E.) featured open-spandrel segmental arches in wooden construction.

Rope bridges, a simple type of suspension bridge, were used by the Inca civilization in the Andes mountains of South America, just prior to European colonization in the 1500s.

During the eighteenth century, there were many innovations in the design of timber bridges by Hans Ulrich, Johannes Grubenmann, and others. The first engineering book on building bridges was written by Hubert Gautier in 1716.

With the Industrial Revolution in the nineteenth century, truss systems of wrought iron were developed for larger bridges, but iron did not have the tensile strength to support large loads. With the advent of steel, which has a high tensile strength, much larger bridges were built, many using the ideas of Gustave Eiffel.

A bridge is designed for trains, pedestrian or road traffic, a pipeline or waterway for water transport or barge traffic. In some cases there may be restrictions in use. For example, it may be a bridge carrying a highway and forbidden for pedestrians and bicycles, or a pedestrian bridge, possibly also for bicycles. A Road-rail bridge carries both road and rail traffic.

The area underneath several bridges have become makeshift shelters and homes to homeless people.

The undersides of bridges all around the world are spots of prevalent graffiti.

To create a beautiful image, some bridges are built much taller than necessary. This type, often found in east-Asian style gardens, is called a Moon bridge, evoking a rising full moon.

Other garden bridges may cross only a dry bed of stream washed pebbles, intended only to convey an impression of a stream.

Often in palaces a bridge will be built over an artificial waterway as symbolic of a passage to an important place or state of mind. A set of five bridges cross a sinuous waterway in an important courtyard of the Forbidden City in Beijing, the People's Republic of China. The central bridge was reserved exclusively for the use of the Emperor, Empress, and their attendants.

Distribution of forces in bridge structures

Bridges may be classified by how the four forces of tension, compression, bending and shear are distributed through their structure. Most bridges will employ all of the principal forces to some degree, but only a few will predominate. The separation of forces may be quite clear. In a suspension or cable-stayed span, the elements in tension are distinct in shape and placement. In other cases the forces may be distributed among a large number of members, as in a truss, or not clearly discernible to a casual observer as in a box beam.

A bridge's structural efficiency may be considered to be the ratio of load carried to bridge weight, given a specific set of material types. In one common challenge, students are divided into groups and given a quantity of wood sticks, a distance to span, and glue, and then asked to construct a bridge that will be tested to destruction by the progressive addition of load at the center of the span. The bridge taking the greatest load is by this test the most structurally efficient. A more refined measure for this exercise is to weigh the completed bridge rather than measure against a fixed quantity of materials provided and determine the multiple of this weight that the bridge can carry, a test that emphasizes economy of materials and efficient glue joints.

A bridge's economic efficiency will be site and traffic dependent, the ratio of savings by having a bridge (instead of, for example, a ferry, or a longer road route) compared to its cost. The lifetime cost is composed of materials, labor, machinery, engineering, cost of money, insurance, maintenance, refurbishment, and ultimately, demolition and associated disposal, recycling, and replacement, less the value of scrap and reuse of components. Bridges employing only compression are relatively inefficient structurally, but may be highly cost efficient where suitable materials are available near the site and the cost of labor is low. For medium spans, trusses or box beams are usually most economical, while in some cases, the appearance of the bridge may be more important than its cost efficiency. The longest spans usually require suspension bridges.

Some bridges carry special installations such as the tower of Nový Most bridge in Bratislava which carries a restaurant. On other suspension bridge towers transmission antennas are installed.

A bridge can carry overhead power lines as the Storstrøm Bridge.