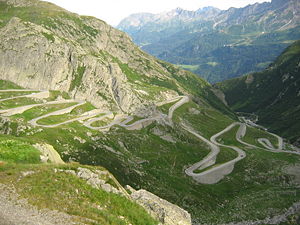 The Saint Gotthard Pass road with hairpin turns in the Swiss Alps.

A road is an identifiable route, way, or path for the passage of people, vehicles, or animals between two or more places.[1] Roads are typically smoothed, paved, or otherwise prepared to allow easy travel,[2] although they need not be. Historically, many roads were simply recognizable routes without any formal construction or maintenance.[3] Roads that pass through a city, town, or village are often known as streets.[4]

Society depends heavily on efficient, well-maintained roads. They provide the infrastructure for the transport of people and goods. Thus they contribute to the freedom of travel and economic health. In addition, they contribute to urban space easement. Road construction, however, needs to take into consideration the environmental impact of the construction process and the traffic that will use the road. 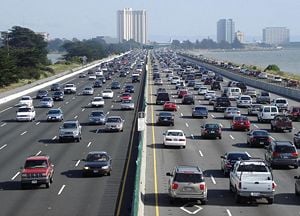 Interstate 80, the second-longest U.S. Interstate highway, runs from California to New Jersey. This image was taken near Berkeley, California.

Castle Roads, in Bermuda, as depicted in a nineteenth-century military map. This is an example of the maritime application of the word road. 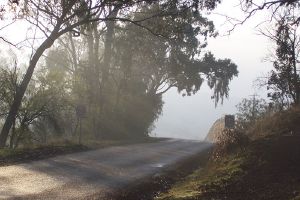 A misty road in Australia, entering into a township.

In original usage, a "road" was simply any pathway fit for riding. The word “street,” which can be traced to the Latin strata, was kept for paved pathways that had been prepared to ease travel in some way. Thus, many "Roman Roads" have the word "street" as part of their name.[5] Roads are a prerequisite for road transport of goods on wheeled vehicles. 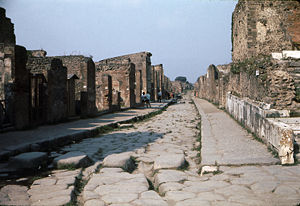 A cobblestone road runs through the ancient city of Pompeii. The deep ruts were probably generated by the wheels of numerous carts that used the road.

It has been suggested that some roads may have originated when humans began following animal trails.[6][7] The Icknield Way, known as the oldest road in Britain, is given as an example of this type of road, as it is a natural course that has been used by both humans and animals.[8] Others have noted that animals do not follow constant paths, implying that the origins of roads cannot simply be traced to animal trails.[3] Whatever the case, it appears that rough pathways were used by human travelers by about 10,000 B.C.E.[3]

Some highlights of road construction since about 4000 B.C.E. are given below. 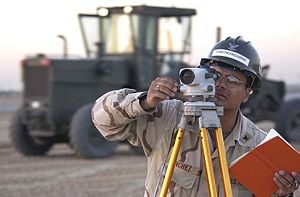 Surveyor at work with a leveling instrument. 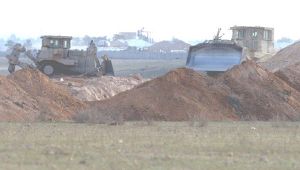 Heavy bulldozers, such as the Caterpillar D9, are powerful tools, making them highly suitable for large earthmoving projects. 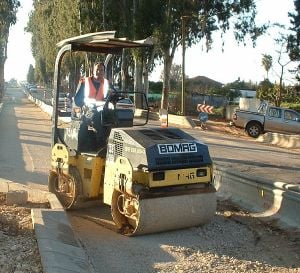 Road construction requires the creation of a continuous right-of-way, overcoming geographic obstacles and having grades low enough to permit vehicular or foot travel.[15] (pg15) It may also need to meet standards set by law[16] or official guidelines.[17]

Before construction can begin, the process must go through the design, planning, and approval stages, addressing safety, legal, and environmental considerations. This is followed by alignment of the road by a surveyor.[18] The radii and gradient are designed and staked out to best suit the natural ground levels and minimize the amount of cut and fill.[17] (page34) Great care is taken to preserve reference benchmarks.[17] (59)

The actual construction work is often begun with the removal of earth and rock by digging or blasting, construction of embankments, bridges and tunnels, and removal of vegetation (possibly including deforestation), followed by the laying of pavement material. Various types of road-building equipment are employed for this work.[19] [20]

Roadways are designed and built primarily for vehicular and pedestrian traffic. Storm drainage and environmental impacts are major concerns. Erosion and sediment controls are constructed to prevent detrimental effects. Drainage lines are laid with sealed joints in the road easement with runoff coefficients and characteristics adequate for the land zoning and storm water system. Drainage systems must be capable of carrying water to an appropriate watercourse, creek, river, or the sea for drainage discharge.[17] (38 to 40)

A borrow pit (source for obtaining fill, gravel, and rock) and a water source should be located near or within reasonable distance from the road construction site. Approval from local authorities may be required to draw water, or to crush and screen materials for construction needs. The top soil and vegetation are removed from the borrow pit and stockpiled for subsequent rehabilitation of the extraction area.[17] (53 to 56)

Much of the vegetation maybe mulched and put aside for use during reinstatement. The topsoil is usually stripped and stockpiled nearby for rehabilitation of newly constructed embankments along the road. Stumps and roots are removed and holes filled as required before the earthwork begins. After road construction is completed, final rehabilitation will include seeding, planting, watering and other activities to reinstate the area, making it consistent with untouched surrounding areas.[17] (66 to 67)

Processes during earthwork include excavation, removal of material to spoil, filling, compacting, construction and trimming. If rock or other unsuitable material is discovered, it is removed. Moisture content is managed and replaced with standard fill compacted to 90 percent relative compaction. Generally, rock blasting is discouraged in the road bed. When a depression must be filled to bring the level up to the road grade, the native bed is compacted after the topsoil has been removed. The fill is made by the "compacted layer method," where a layer of fill is spread and compacted to specifications. The process is repeated until the desired grade is reached.[17] (68 to 69) 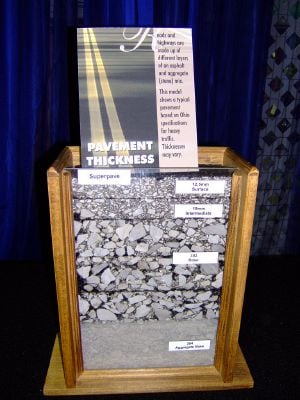 General fill material should be free of organics, meet minimum California bearing ratio (CBR) results, and have a low plasticity index. Select fill (sieved) should be composed of gravel, decomposed rock or broken rock below a specified particle size and be free of large lumps of clay. Sand clay fill may also be used. The road bed must be "proof rolled" after each layer of fill is compacted. If a roller passes over an area without creating visible deformation or spring, the section is deemed to comply.[17] (70 to 72)

The completed road way is finished by paving or left with a gravel or other natural surface. The type of road surface is dependent on economic factors and expected usage. Safety improvements like Traffic signs, Crash barriers, Raised pavement markers, and other forms of Road surface marking are installed. Like all structures, roads deteriorate over time. Deterioration is primarily due to accumulated damage from vehicles, but environmental effects such as frost heaves, thermal cracking, and oxidation often contribute.[22] According to a series of experiments carried out in the late 1950s, called the AASHO Road Test, it was empirically determined that the effective damage done to the road is roughly proportional to the fourth power of axle weight.[23] A typical tractor-trailer weighing 80,000 pounds, with 8,000 pounds on the steer axle and 36,000 pounds on both tandem axle groups, is expected to do 7,800 times more damage than a passenger vehicle with 2,000 pounds on each axle.

Pavements are designed for an expected service life or design life. In some countries, the standard design life is 40 years for a new bitumen and concrete pavement. Maintenance is considered in the whole life cost of the road with service at 10, 20, and 30 year milestones.[24]

Roads can be designed for various lifetimes, such as 8, 15, 30, and 60 years. When pavement lasts longer then its intended life, it may have been overbuilt, and the original costs may have been too high. When a pavement fails before its intended design life, the owner may have excessive repair and rehabilitation costs. Many concrete pavements built since the 1950s have significantly outlived their intended design lives.[25] Some roads, such as Chicago's "Wacker Drive" (a major two-level viaduct in the downtown area), are being rebuilt with a designed service life of 100 years.[26]

Virtually all roads require some form of maintenance before they come to the end of their service life. Maintenance treatments for asphalt concrete generally include crack sealing, surface rejuvenating, fog sealing, micro-milling and thin surfacings. Thin surfacing preserves, protects and improves the functional condition of the road while reducing the amount of routine maintenance, leading to extended service life without increasing structural capacity.[27]

Transport economics is a branch of economics that deals with the allocation of resources within the transport sector. It is closely associated with civil engineering. Transport economics differs from some other branches of economics in that the assumption of a space-less, instantaneous economy does not hold. People and goods flow over networks at certain speeds. Advanced ticket purchases are often stimulated by lower fares. The networks themselves may or may not be competitive. A particular trip may require bundling the services provided by several firms, agencies, and modes.

Although transport systems follow the same supply and demand theory as other industries, the complications of network effects and choices between non-similar goods (such as car and bus travel) make it difficult to estimate the demand for transportation facilities. The development of models to estimate likely choices between non-similar goods in transport decisions, called "discrete choice" models, led to establishment of the important branch of econometrics, for which Daniel McFadden received a Nobel Prize.[28]

In transport, demand can be measured in terms of numbers of journeys made or total distance traveled across all journeys. Examples are passenger-kilometers for public transport and vehicle-kilometers of travel (VKT) for private transport. Supply is considered a measure of capacity. The price of the good (travel) is measured using the generalized cost of travel, which includes both money and time. The effects of increasing supply (capacity) are of particular interest in transport economics, as the potential environmental consequences are significant.

Road building and maintenance are areas of economic activity that remain dominated by the public sector, though private contractors are often used.[29] Roads (except those on private property not accessible to the general public) are typically paid for by taxes (often raised through levies on fuel),[30] though some public roads, especially highways, are funded by tolls.[31]

Prior to the advent of the internal combustion engine, a principal environmental effect was production of excrement from horses, cattle, and other animals on the streets. In the nineteenth century, this issue became significant enough for some European city officials to call for more cleanliness on the roads. Beginning in the twentieth century, the excrement problem was overshadowed by issues about vehicular noise and the emission of air pollutants. Some are also concerned about the disturbance of natural habitats by the establishment of roads that cut through them.

Motor vehicles operating on roads emit air pollutants, which is a particular problem for congested city streets and other low-speed conditions. Concentrations of air pollutants and adverse respiratory health effects are greater near the road than at some distance away from the road.[33]

Driving on the right or the left 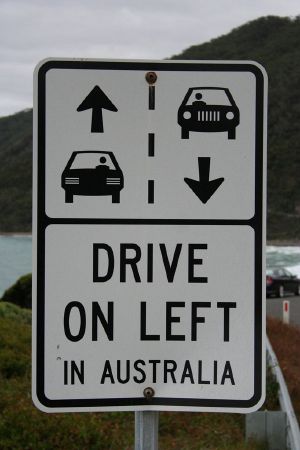 Traffic may flow on the right or left side of the road, depending on the traffic regulations of each country.[34] In countries where traffic flows on the right, traffic signs are mostly on the right side of the road; roundabouts and traffic circles have to be negotiated counterclockwise; and pedestrians crossing a two-way road should watch out for traffic from the left first.[35] The reverse is applies in countries where traffic flows on the left.