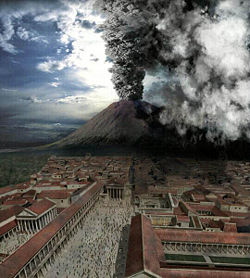 A computer-generated depiction of the eruption of Mount Vesuvius in 79 C.E. which buried Pompeii, from the Discovery Channel's Pompeii: The Last Day

Pompeii is a ruined city of Roman Empire near modern Naples in the Italian region of Campania, in the territory of the commune of Pompeii. It was destroyed during a catastrophic eruption of the volcano Mount Vesuvius in 79 C.E. The volcano buried the city under many feet of ash and it was lost for 1,600 years before its accidental rediscovery. Since then, its excavation has provided an extraordinarily detailed insight into the life of a city at the height of the Roman Empire. Today, it is one of Italy's leading tourist attractions and is a UNESCO World Heritage Site. 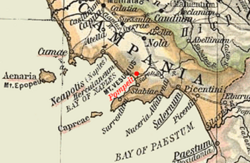 The ruins of Pompeii are situated near the modern suburban town of Pompei. It stands on a spur formed by a lava flow to the north of the mouth of the Sarno River (known in ancient times as the Sarnus). Today it is some distance inland, but in ancient times it would have been nearer the coast.

Although most of the archaeological digs at the site only extend down to the street level of the 79 C.E. volcanic event, deeper digs in older parts of Pompeii and core samples of nearby drilling have exposed layers of jumbled sediment that suggest that the city had suffered from the volcano and other seismic events before then. Three sheets of sediment have been found on top of the lava bedrock that lies below the city and, mixed in with the sediment, archaeologists have found bits of animal bone, pottery shards and bits of plants. Using carbon dating, the oldest layer has been placed as in the eighth to sixth century B.C.E., about the time that the city was founded. The other two layers are separated from the other layers by well developed soil layers or Roman pavement and were laid down in the fourth century B.C.E. and second century B.C.E. The theory behind the layers of jumbled sediment is large landslides, perhaps triggered by extended rainfall.[1]

The town was founded around the sixth century B.C.E. by the Osci or Oscans, a people of central Italy. It had already been used as a safe port by Greek and Phoenician sailors. When the Etruscans threatened an attack, Pompeii allied with the Greeks, who then dominated the Gulf of Naples. In the fifth century B.C.E., the Samnites conquered it (and all the other towns of Campania); the new rulers imposed their architecture and enlarged the town. It has been supposed that during the Samnites' domination, Rome conquered Pompeii for a while, but these theories have not been verified.

Pompeii took part in the war that the towns of Campania initiated against Rome, but in 89 B.C.E. it was besieged by Lucius Cornelius Sulla. Although the troops of the Social League, headed by Lucius Cluentius, helped in resisting the Romans, in 80 B.C.E. Pompeii was forced to surrender after the conquest of Nola. It became a Roman colony with the name of Veneria Pompeianorum. The town became an important passage for goods that arrived by sea and had to be sent toward Rome or Southern Italy along the nearby Appian Way. 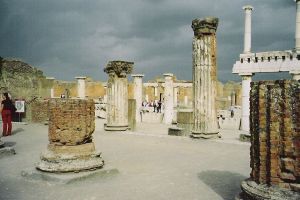 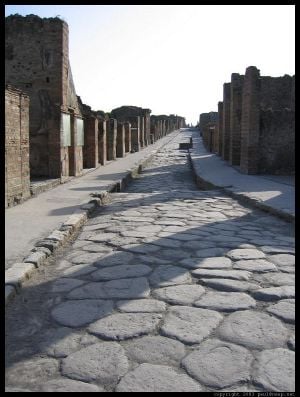 A quiet street in Pompeii 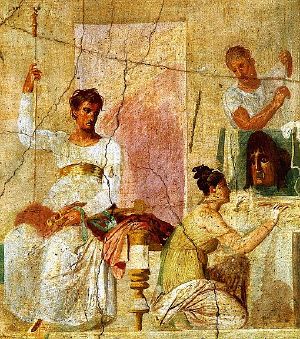 Fresco on the wall of a Pompeii house 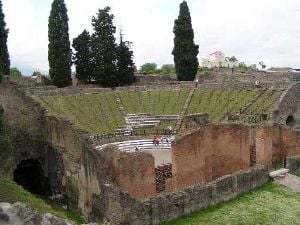 Teatro Grande with a large audience capacity, next to Teatro Piccolo

Pompeii gymnasium seen from the top of the stadium wall

The excavated town offers a snapshot of Roman life in the first century, frozen at the moment it was buried in 79 C.E. The Forum, the baths, many houses, and some out-of-town villas like the "Villa of the Mysteries" remain surprisingly well preserved.

Pompeii was a lively place, and evidence abounds of literally the smallest details of everyday life. For example, on the floor of one of the houses (Sirico's), a famous inscription Salve, lucru (Welcome, money), perhaps humorously intended, shows us a trading company owned by two partners, Sirico and Nummianus (but this could be a nickname, since nummus means "coin" or "money"). In other houses, details abound concerning professions and categories, such as for the "laundry" workers (Fullones). Wine jars have been found bearing what is apparently the world's earliest known marketing pun, Vesuvinum (combining Vesuvius and the Latin for wine, vinum). Graffiti carved on the walls shows us real street Latin.

In 89 B.C.E., after the final occupation of the city by Roman General Lucius Cornelius Sulla, Pompeii was finally annexed to the Roman Republic. Under this period Pompeii underwent a vast period of development, largely new infrastructure, most of which was built during the Augustan period. Worth noting are an amphitheater, a Palaestra with a central cella natatoriua (swimming pool), an aqueduct which covered more than 25 street fountains, more than four public baths (the largest of which remained unfinished after the eruption), and a large number of private houses (domus) and businesses. The aqueduct branched out through three main pipes from the Castelum Aquae, where the waters were collected before being distributed to the city, although it did much more than distribute the waters, it did so with the prerequisite that in the case of gradually extreme drought, the water supply would first fail to reach the public baths (least vital service), then private houses and businesses, and when there would be no water flow at all, the system would then at last fail to supply the public fountains (most vital service) in the streets of Pompeii.

The large number of well-preserved frescoes throw a great light on everyday life and have been a major advance in art history of the ancient world, with the innovation of Pompeian Styles the First/Second/Third Style demarcation.

At the time of the eruption, the town could have had some 20,000 inhabitants, and was located in an area in which Romans had their vacation villas. William Abbott explains, "At the time of the eruption, Pompeii had reached its high point in society as many Romans frequently visited Pompeii on vacations." It is the only ancient town of which the whole topographic structure is known precisely as it was, with no later modifications or additions. It was not distributed on a regular plan as we are used to seeing in Roman towns, due to the difficult terrain. But its streets are straight and laid out in a grid, in the purest Roman tradition; they are laid with polygonal stones, and have houses and shops on both sides of the street. It followed its decumanus and its cardus, centered on the forum.

Besides the forum, many other services were found: the Macellum (great food market), the Pistrinum (mill), the Thermopolium (sort of bar that served cold and hot beverages), and cauporioe (small restaurants). An amphitheater and two theaters have been found, along with a palaestra or gymnasium. A hotel (of 1,000 square meters) was found a short distance from the town; it is now nicknamed the "Grand Hotel Murecine."

In 2002 another important discovery at the mouth of Sarno River revealed that the port also was populated and that people lived in palafittes, within a system of channels that suggested a likeness to Venice to some scientists. These studies are just beginning to produce results.

The inhabitants of Pompeii, as those of the area today, had long been used to minor tremors (indeed, the writer Pliny the Younger wrote that earth tremors "were not particularly alarming because they are frequent in Campania"), but on February 5, 62[2] there was a severe earthquake which did considerable damage around the bay and particularly to Pompeii. In the time between 62 and the eruption in 79 C.E., some rebuilding was done, but some of the damage had still not been repaired at the time of the eruption.[3]

An important current field of research concerns structures that were being restored at the time of the eruption (presumably damaged during the earthquake of 62). Some of the older, damaged, paintings could have been covered with newer ones, and modern instruments are being used to catch a glimpse of the long hidden frescoes. The probable reason why these structures were still being repaired ten years after the earthquake was the increasing frequency of smaller quakes that led up to the eruption.

By the first century C.E., Pompeii was only one of a number of towns located around the base of Mount Vesuvius. The area had a substantial population which grew prosperous from the region's renowned agricultural fertility. Many of Pompeii's neighboring communities, most famously Herculaneum, also suffered damage or destruction during the 79 C.E. eruption. Plaster casts of victims of the eruption

Thick layers of ash having covered the two towns, they were abandoned and eventually their names and locations were forgotten. Then Herculaneum was rediscovered in 1738, and Pompeii in 1748. These towns have since been excavated to reveal many intact buildings and wall paintings. The towns were actually found in 1599 by an architect named Fontana, who was digging a new course for the Sarno, but it took more than 150 years before a serious campaign was started to unearth them. The king Charles VII of Two Sicilies took great interest in findings even after becoming the king Charles III of Spain.

Giuseppe Fiorelli took charge of the excavations in 1860. During early excavations of the site, occasional voids in the ash layer had been found that contained human remains. It was Fiorelli who realized these were spaces left by the decomposed bodies and so devised the technique of injecting plaster into them to perfectly recreate the forms of Vesuvius's victims. What resulted were highly accurate and eerie forms of the doomed Pompeiani who failed to escape, in their last moment of life, with the expression of terror often quite clearly visible.[4]