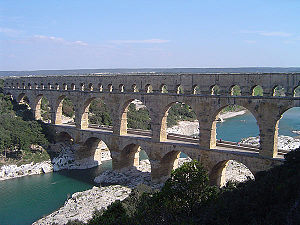 A Roman aqueduct at Pont du Gard, France, was built around 19 B.C.E. It is one of France's major tourist attractions and a World Heritage Site.

An aqueduct is an artificial channel that is constructed to convey water from one location to another. The word is derived from the Latin aqua, "water" and ducere, "to lead." Many aqueducts are raised above the landscape, resembling bridges rather than rivers. Structurally, they are similar to viaducts, which is a bridge composed of several small spans constructed over land or water. Viaducts are are used for roads or railways.

Aqueducts have been built to supply water to large cities and to irrigate agricultural lands. If they are sufficiently large, they may also be used for transportation, allowing barges to cross ravines and valleys. 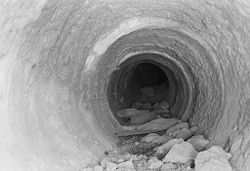 View from inside a Roman aqueduct, from the Pools of Solomon to Jerusalem.

Although famously associated with the ancient Romans, aqueducts were devised centuries earlier in the Middle East, where people including the Egyptians built sophisticated irrigation systems. Roman-style aqueducts were used as early as the seventh century B.C.E., when the Assyrians built a limestone aqueduct 30 feet (10 meters) high and 900 feet (300 m) long to carry water across a valley to their capital city, Nineveh. The full length of the aqueduct ran for 50 miles (80 km).

In the New World, the Aztec capital of Tenochtitlán was supplied with water by two aqueducts in the middle of the second millennium.

Roman aqueducts were built in all parts of the Roman Empire, from Germany to Africa, and especially in the city of Rome itself, where they totaled over 260 miles (416 km). The aqueducts were important for supplying water to large cities across the empire, and they set a high standard of engineering that was not surpassed for more than a thousand years. 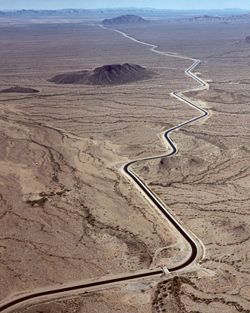 The Central Arizona Project Aqueduct, the largest and most expensive aqueduct system ever constructed in the United States.

Much of the expertise of the Roman engineers was lost in the Dark Ages, and in Europe the construction of aqueducts largely ceased until the High Middle Ages. An example of an extant small scale aqueduct system built in 1202 by Cistercian monks is the Spanish Real Monasterio de Nuestra Senora de Rueda, whose central heating and waste disposal system relied upon a series of aqueducts originating from a diversion of the Ebro River. Through most of the Middle Ages and even up to the nineteenth century, water was instead usually supplied through the digging of wells, though this could cause serious public health problems when local water supplies became contaminated. One notable exception was the New River, a manmade waterway in England, opened in 1613 to supply London with fresh drinking water over a distance of 38 miles (62 km). The development of canals provided another spur to aqueduct building.

The nineteenth century saw aqueduct building resume on a large scale to supply fast-growing cities and water-hungry industries. The development of new materials (such as cast iron) and new technologies (such as steam power) enabled significant improvements. For instance, cast iron permitted the construction of larger, more highly pressurized inverted siphons, while steam and electrically powered pumps enabled a major increase in the quantity and speed of water flow. England led the world in aqueduct construction, with notable examples being built to convey water to Birmingham, Liverpool, and Manchester.

In modern times, the largest aqueducts of all have been built in the United States to supply its biggest cities. The Catskill Aqueduct carries water to New York over a distance of 120 miles (190 km), but it is dwarfed by aqueducts in the far west of the country, most notably the Colorado River Aqueduct, which supplies the Los Angeles area with water from the Colorado River nearly 250 miles (400 km) to the east, and the 444 mile (714.5 km) California Aqueduct which runs from the Sacramento Delta to Lake Perris.

Historically, many agricultural societies have constructed aqueducts to irrigate crops. Archimedes invented the water screw to raise water for use in irrigation of croplands.

Another widespread use for aqueducts is to supply large cities with clean drinking water. Some of the famed Roman aqueducts still supply water to Rome today. In California, three large aqueducts supply water over hundreds of miles to the Los Angeles area. Two are from the Owens River area, and a third is from the Colorado River.

In more recent times, aqueducts were used for transportation purposes to allow canal barges to cross ravines or valleys. During the Industrial Revolution of the eighteenth century, many aqueducts were constructed as part of the general boom in canal-building.

In modern civil engineering projects, detailed study and analysis of open channel flow is commonly required to support flood control, irrigation systems, and large water supply systems when an aqueduct rather than a pipeline is the preferred solution. The aqueduct is a simple way to get water to other ends of a field.

In the past, aqueducts often had channels made of dirt or other porous materials. Significant amounts of water were lost through such unlined aqueducts. As water gets increasingly scarce, these canals are being lined with concrete, polymers, or impermeable soil. In some cases, a new aqueduct is built alongside the old one because the water supply cannot be shut down during construction. 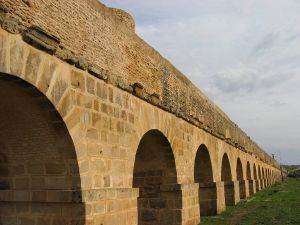 | |name= }}): carries the Ringvaart canal over the A4 highway and the HSL Zuid being constructed, which are situated on land below the level of the canal (and below sea level)