Thomas Telford (August 9, 1757 – September 2, 1834) was born in Westerkirk, Scotland. He was a stonemason, architect and civil engineer and a noted road, bridge and canal builder. He was known to thoroughly test his materials before beginning any new construction. Telford had a reputation for quality work and was summoned to take part in the creation of many new architectural and engineering projects. He was essentially self-taught in his profession. Telford's work on canals and bridges made a significant contribution to the economy of Industrial Revolution era England, aiding the transport of goods and of people as speedier and more efficient systems were becoming crucial.

Telford's father, a shepherd, died soon after he was born. He was raised in poverty by his mother. At the age of 14 he was apprenticed to a stonemason, and some of his earliest work can still be seen on the bridge across the River Esk in Langholm in the Scottish borders. He worked for a time in Edinburgh and in 1782 he moved to London where (after meeting architects Robert Adam and Sir William Chambers) he was involved in building additions to Somerset House in London. Two years later he found work at Portsmouth dockyard and, although still largely self-taught, was extending his talents to the specification, design and management of building projects.

In 1787, through his wealthy patron William Pulteney, he became Surveyor of Public Works in Shropshire. Civil engineering was a discipline still in its infancy, so Telford was set on establishing himself as an architect. His projects included renovation of Shrewsbury Castle, the town's prison (during the planning of which he met leading prison reformer John Howard), St Mary Magdalene Church in Bridgnorth and another church in Madeley.

As the Shropshire county surveyor, Telford was also responsible for bridges. In 1790 he designed a bridge carrying the London-Holyhead road over the River Severn at Montford, the first of some 40 bridges he built in Shropshire, including major crossings of the Severn at Buildwas, and Bridgnorth. The bridge was Telford's first iron bridge. He was influenced by the famous bridge at Ironbridge, and observed that it was grossly over-designed for its function, and many of the component parts were poorly cast. By contrast, his bridge was 30 ft (ten m) wider in span and half the weight, although it now no longer exists. He was one of the first engineers to test his materials thoroughly before construction. As his engineering prowess grew, Telford was to return to this material repeatedly.

In 1795 the bridge at Bewdley, in Worcestershire was swept away in the winter floods and Telford was responsible for the design of its replacement. The same winter floods saw the bridge at Tenbury also swept away. This bridge across the River Teme was the joint responsibility of both Worcestershire and Shropshire and the bridge has a bend where the two counties meet. Telford was responsible for the repair to the northern Shropshire end of the bridge.

Telford's reputation in Shropshire led to his appointment in 1793 to manage the detailed design and construction of the Ellesmere Canal, linking the ironworks and collieries of Wrexham via the north-west Shropshire town of Ellesmere, with Chester, utilizing the existing Chester Canal, and then the River Mersey.

Among other structures, this involved the spectacular Pontcysyllte Aqueduct over the River Dee in the Vale of Llangollen, where Telford used a new method of construction consisting of troughs made from cast iron plates and fixed in masonry.

Eminent canal engineer William Jessop oversaw the project, but he left the detailed execution of the project in Telford's hands. The same period also saw Telford involved in the design and construction of the Shrewsbury Canal. When the original engineer, Josiah Clowes, died in 1795, Telford succeeded him. One of Telford's achievements on this project was the design of the cast-iron aqueduct at Longdon-on-Tern, pre-dating that at Pontcysyllte, and substantially bigger than the UK's first cast-iron aqueduct, built by Benjamin Outram on the Derby Canal just months earlier.

The Ellesmere Canal was completed in 1805 and alongside his canal responsibilities, Telford's reputation as a civil engineer meant he was constantly consulted on numerous other projects. These included water supply works for Liverpool, improvements to London's docklands and the rebuilding of London Bridge (c. 1800).

Most notably (and again William Pulteney was influential), in 1801 Telford devised a master plan to improve communications in the Highlands of Scotland, a massive project that was to last some 20 years. It included the building of the Caledonian Canal along the Great Glen and redesign of sections of the Crinan Canal, some 920 miles of new roads, over a thousand new bridges (including the Craigellachie Bridge), numerous harbour improvements (including works at Aberdeen, Dundee, Peterhead, Wick, Portmahomack and Banff), and 32 new churches.

Telford also undertook highway works in the Scottish Lowlands, including 184 miles of new roads and numerous bridges, ranging from a 112 ft (34 m) span stone bridge across the Dee at Tongueland in Kirkcudbright (1805-1806) to the 129 ft (39 m) tall Cartland Crags bridge near Lanark (1822).

Telford was consulted in 1806 by the King of Sweden about the construction of a canal between Gothenburg and Stockholm. His plans were adopted and construction of the Göta Canal began in 1810. Telford traveled to Sweden at that time to oversee some of the more important initial excavations.

The 'Colossus of Roads' 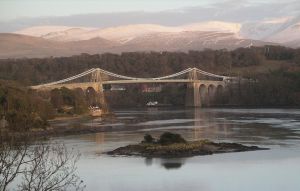 During his later years, Telford was responsible for rebuilding sections of the London to Holyhead road, a task completed by his assistant of ten years, John MacNeill; today, much of the route is the A5 trunk road. Between London and Shrewsbury, most of the work amounted to improvements. Beyond Shrewsbury, and especially beyond Llangollen, the work often involved building a highway from scratch. Notable features of this section of the route include the iron bridge across the River Conwy at Betws-y-Coed, the ascent from there to Capel Curig and then the descent from the pass of Nant Ffrancon towards Bangor. Between Capel Curig and Bethesda, in the Ogwen Valley, Telford deviated from the original road, built by Romans during their occupation of this area.

On the island of Anglesey a new embankment across the Stanley Sands to Holyhead was constructed, but the crossing of the Menai Strait was the most formidable challenge, overcome by the Menai Suspension Bridge (1819-1826). 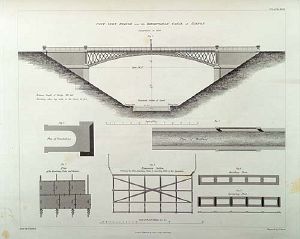 Telford also worked on the North Wales coast road between Chester and Bangor, including another major suspension bridge at Conwy, opened later the same year as its Menai counterpart.

Further afield Telford designed a road to cross the centre of the Isle of Arran. Named the 'String road', this route traverses bleak and difficult terrain to allow traffic to cross from east to west Arran (and vice versa) avoiding the circuitous coastal route.

Telford improved on methods for the building of macadam roads by improving the selection of stone based on thickness, taking into account traffic, alignment and slopes.[1]

The punning nickname Colossus of Roads was given to Telford by his friend and Poet Laureate Robert Southey. Telford’s reputation as a man of letters may have preceded his fame as an engineer: he had published poetry between 1779 and 1784, and an account of a tour of Scotland with Southey. His will left bequests to Southey (who would later write Telford’s biography), the poet Thomas Campbell (1777-1844) and to the publishers of the Edinburgh Encyclopaedia (to which he had been a contributor).[2] 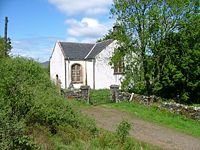 One of Telford's smaller commissions, the church on the Isle of Ulva (1827/8) in the Inner Hebrides.

Other works by Telford include the St Katharine Docks (1824-1828) close to Tower Bridge in central London, where he worked with alongside the architect Philip Hardwick, the Gloucester and Berkeley Ship Canal (today known as the Gloucester and Sharpness Canal), the second Harecastle Tunnel on the Trent and Mersey Canal (1827), and the Birmingham and Liverpool Junction Canal (today part of the Shropshire Union Canal)—started in May 1826 but finished, after Telford's death, in January 1835. At the time of its construction in 1829, Galton Bridge was the longest single span in the world. He also built Whitstable harbour in Kent in 1832, in connection with the Canterbury and Whitstable Railway with an unusual system for flushing out mud using a tidal reservoir.

In 1820, Telford was appointed the first President of the recently-formed Institution of Civil Engineers, a post he held until his death. He was buried in Westminster Abbey.

Telford was a talented architect, stonemason, and civil engineer. His works offer a reminder of the quality and precision that he dedicated to his craft. Telford was highly touted during his lifetime and continues to be a notable figure.

When a new town was being built in the Wrekin area of Shropshire in 1968, it was named Telford in his honor. In 1990, when it came to naming one of Britain's first City Technology Colleges, to be situated in Telford, Thomas Telford was the obvious choice. Thomas Telford School is consistently among the top performing comprehensive schools in the country.

The borough formerly called Hendrick’s Blacksmith in Montgomery County, Pennsylvania changed its name to Telford in 1857, after the North Pennsylvania Railroad Company named its new station there "Telford" in honor of Thomas Telford.

Edinburgh's Telford College, one of Scotland's largest colleges is named in the honour of the famous engineer.[3]

Retrieved from https://www.newworldencyclopedia.org/p/index.php?title=Thomas_Telford&oldid=1033452
Categories:
Hidden category:
This page was last edited on 3 March 2020, at 19:18.
Content is available under Creative Commons Attribution/Share-Alike License; additional terms may apply. See Terms of Use for details.