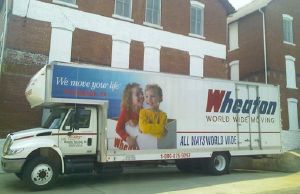 A truck is a motorized vehicle usually used for transporting bulk goods, materials, or equipment. The word "truck" comes from the Greek word trochos, meaning "wheel." In North America, the big wheels of wagons were called trucks. When the gasoline-engine-driven trucks became available, these were called "motor trucks."

Lorry is a British term for a truck, but it is used only for the medium and heavy types. A van, pickup truck, or Jeep would not be called a "lorry." Other languages have loanwords based on these terms, such as the Malay lori and the Mexican Spanish troca (or pickup in northern Mexico). 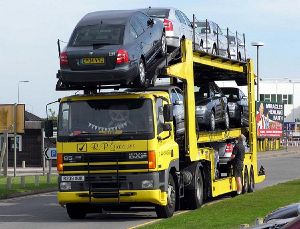 In Australia and New Zealand, a small vehicle with an open back is called a ute (short for "utility vehicle") and the word "truck" is reserved for larger vehicles.

Anatomy of a truck

Trucks are complex machines that generally share certain common features. Each truck has a chassis, a cab, an area for placing cargo or equipment, axles, suspension and wheels, an engine, and a drivetrain. It usually has pneumatic, hydraulic, water, and electrical systems. Many trucks also tow one or more trailers or semi-trailers. 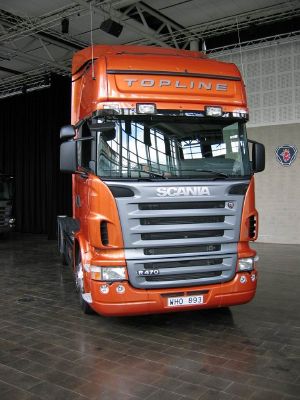 A cab may be built in one of a few possible configurations:

US truck with long nose and sleeper cab

Trucks can be equipped with all types of engines. Small trucks such as SUVs or pickups, and even light, medium-duty trucks in North America and Russia use gasoline engines. Most heavier trucks use four stroke turbo intercooler diesel engines, although there are alternatives. Huge off-highway trucks use locomotive-type engines, such as a V12 Detroit Diesel two stroke engine.

North American manufactured highway trucks almost always use an engine built by a third party, such as CAT, Cummins, or Detroit Diesel. The only exceptions to this are Volvo and its subsidiary Mack Trucks, which are available with own engines. Freightliner, Sterling Trucks and Western Star, subsidaries of DaimlerChrysler, are available with Mercedes-Benz and Detroit Diesel engines. Trucks and buses built by Navistar International can also have International engines. The Swedish truckmaker Scania claims they stay away from the United States-market because of this third party tradition.

In the European union all truck engines must comply with Euro 4 regulations. The regulations will become more severe in 2008 with the introduction of Euro 5. 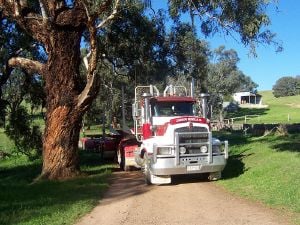 Small trucks use the same types of transmissions as most cars that have either an automatic transmission or a manual transmission with synchronizers. Bigger trucks often use manual transmissions without synchronizers that have less bulk and weight, although synchromesh transmissions are used in larger trucks as well. Transmissions without synchronizers known as "crash boxes" require double clutching for each shift, (which can lead to repetitive motion injuries), or a technique known colloquially as "floating"—a method of changing gears that doesn't use the clutch, except for starts and stops, due to the physical effort of double clutching especially with non power assisted clutches, faster shifts, and less clutch wear. The so-called skip changing is also widely used—in principle, the operation is the same, but it requires neutral be held slightly longer than single gear change.

Common North American setups include 9, 10, 13, 15, and 18 speeds. Automatic and semi-automatic transmissions for heavy trucks are becoming more and more common, due to advances both in transmission and engine power. In Europe, 8, 10, and 12 gears are common on larger trucks with manual transmission, while automatic or semiautomatic transmission may have anything from 5 to 12 gears. Almost all heavy truck transmissions are of a "range (double H shift pattern) and split" type, where range change and so called half gears or splits are air operated and always preselected before the main gears selection.

In Europe, more new trucks are being bought with automatic or semi-automatic transmission. The primary reason may be that such transmissions give a driver more time to concentrate on the road and traffic conditions. Also, some drivers are claiming that driving a manual transmission can damage their knees. 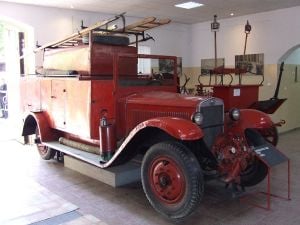 The chassis or frame of a truck is commonly constructed mainly of two beams, and several crossmembers. A truck chassis consists of two parallel straight C-shaped beams, or in some cases stepped or tapered beams, these held together by crossmembers. In most instances, gussets help attach the crossmembers to the beams. The "C-shape" of the beams has a middle vertical and longer side, and a short horizontal flange at each end; the length of the beams is variable. The chassis is usually made of steel, but can be made (whole or in part) of aluminum for a lighter weight.

The integrity of the chemical composition and structure of the beams is of utmost importance to maintain its strength, to help prevent cracking or breaking of the beams, and to help maintain rigidity and flexibility of the frame. Welding, drilling, and other types of modifications should not be performed by unlicensed individuals. The chassis is the main structure of the truck, and the other parts attach to it. A tow bar may be found attached at one or both ends.

Trucks contribute to air, noise, and water pollution in a manner similar to automobiles. In the case of air pollution emissions, a truck's emissions may actually be lower than that of an automobile on a per pound of vehicle mass basis, although the absolute level on a vehicle mile traveled basis is higher, and diesel soot is especially problematic for health.[1]

With respect to noise pollution, trucks emit considerably higher sound levels at all speeds compared to typical automobiles. This contrast is particularly strong in the case of heavy duty trucks.[2]

Concerns have been raised about the effect of trucking on the environment, particularly as part of the debate on global warming. In the period from 1990 to 2003, carbon dioxide emissions from transportation sources increased by 20 percent, despite improvements in vehicle fuel efficiency.[3] In 2005, transportation accounted for 27 percent of U.S. greenhouse gas emission, increasing faster than any other sector.[4] Between 1985 and 2004 in the United States, energy consumption in freight transportation grew nearly 53 percent, while the number of ton-miles carried increased only 43 percent. According to a 1995 U.S. Government estimate, the energy cost of carrying a ton of freight a distance of one mile averages 514 Btu for water, 337 Btu for rail, 3,100 for trucks, and nearly 20,000 for air transport.[5] Many environmental advocacy organizations favor laws and incentives to encourage the switch from road to rail, especially in Europe.[6]

The quality of vehicles among all heavy truck manufacturers is generally improving. However, according to some industry insiders, the industry has a long way to go before achieving the quality levels reached by automobile manufacturers. Part of the reason for this is that 75 percent of all trucks are custom built. This works against efforts to streamline and automate the assembly line.

Motor Truck Cargo insurance protects the transporter for his responsibility in the event of damaged or lost freight. The policy is purchased with a maximum load limit per vehicle. Cargo insurance coverage limits can range from $10,000 to $100,000 or more. Pricing for this insurance is mainly dependent on the type of cargo being hauled.

Retrieved from https://www.newworldencyclopedia.org/p/index.php?title=Truck&oldid=1085811
Categories:
Hidden category:
This page was last edited on 5 November 2022, at 17:13.
Content is available under Creative Commons Attribution/Share-Alike License; additional terms may apply. See Terms of Use for details.