Daimler AG was founded in 1926 when two pioneer German automakers, Benz & Cie and Daimler-Motoren-Gesellschaft (Daimler Motor Company, DMG) merged into the Daimler-Benz Company to ensure their mutual survival during the German economic crisis of the 1920s. Its automobiles were baptized Mercedes Benz, in honor of DMG's most important car model and the last name of Karl Benz, founder of Benz & Cie. The company became DaimlerChrysler in 1998 when Daimler-Benz acquired the United States-based Chrysler Corporation. The buyout failed to produce the trans-Atlantic automotive powerhouse dealmakers had hoped for, and in 2007 DaimlerChrysler sold Chrysler to Cerberus Capital Management of New York, and renamed itself Daimler AG. Daimler produces cars and trucks under the brands of Mercedes-Benz, Maybach, smart, Freightliner and many others. The company, which pioneered many of the design elements that made gasoline-powered automobiles possible, is now researching alternative propulsion such as biofuels and electricity. Daimler Trucks is the world market leader in hybrid systems. 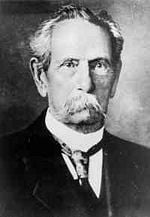 In 1883, Karl Friedrich Benz (1844-1929), founded Benz & Company Rheinische Gasmotoren-Fabrik, usually referred to as, Benz & Cie., together with Max Rose and Friedrich Wilhelm Eßlinger. Benz is generally regarded as the inventor of the gasoline-powered automobile and many of the elements, such as an accelerator, an ignition using sparks from a battery, spark plug, the clutch, the gear shift, the water radiator, and a carburetor,[2] that made the internal combustion engine feasible for use in automobiles. The new company produced industrial machines, and soon began to produce gas engines as well.

In 1885, Karl Benz created the Motorwagen, the first commercial automobile. It was powered by a four-stroke gasoline engine, which was his own design. He was granted a patent for his automobile dated January 29, 1886. The automobile had three wheels, it was steered by the front wheel and the passengers and engine were supported by the two wheels in the rear. Benz sold his first automobile in 1888, four years before any other manufacturer.[3] The second person to purchase a Benz, Emile Roger, was a Parisian bicycle manufacturer who had been building Benz engines under license from Karl Benz for several years. In 1888, he decided to add the Benz automobiles to the line he carried in Paris; many of the early Benz automobiles were built in France and sold by Roger, since the Parisians were more inclined to purchase automobiles at the time.

Early customers faced significant problems. At the time, gasoline was available only from pharmacies that sold it in small quantities as a cleaning product. The early-1888 version of the Motorwagen had to be pushed when driving up a steep hill. In August, 1888, without telling her husband, Karl’s wife Bertha drove this vehicle on a 106 km (65 mile) trip from Mannheim to Pforzheim to visit her mother, to demonstrate the feasibility of using it for travel. She arrived at nightfall, and announced the achievement to Karl by telegram. Bertha suggested several improvements, including the addition of another gear.

The demand for stationary, static internal combustion engines forced Karl Benz to enlarge the factory in Mannheim, and in 1886 a new building located on Waldhofstrasse (operating until 1908) was added. By 1899 Benz & Cie. had grown from 50 employees (in 1890) to 430. During the last years of the nineteenth century, Benz was the largest automobile company in the world, producing 572 units in 1899. In 1899, because of its size, Benz & Cie. became a joint-stock company and Friedrich Von Fischer and Julius Ganß joined the Board of Management. The new directors recommended that Benz should create a less expensive automobile suitable for mass production. In 1893, Karl Benz created the Victoria, a two-passenger automobile with a 3-hp engine, which could reach the top speed of 11 mph and had a pivotal front axle operated by a roller-chained tiller for steering. The model was successful; 85 units sold in 1893.

In 1894, Benz improved this design in his new Velo model which was produced on a large scale for the era: 1,200 units from 1894 to 1901. The Benz Velo also participated in the first automobile race, the 1894 Paris to Rouen Rally. In 1895, Benz designed the first truck, and some of the units were later modified by the first bus company: the Netphener, into the first buses. 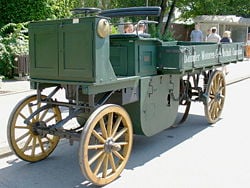 Gottlieb Daimler (1834–1900) and Wilhelm Maybach (1846–1929) were inventors whose ambition was to create small, high speed engines to be mounted in any kind of locomotion device. In 1885 they designed a precursor of the modern petrol engine which they subsequently fitted to a two-wheeler, considered the first motorcycle and, in the next year, to a stagecoach, and a boat. In 1890 they founded Daimler-Motoren-Gesellschaft (Daimler Motor Company, DMG). It was based first in Cannstatt (today Bad Cannstatt, a city district of Stuttgart). Daimler died in 1900, and the company moved in 1903 to Stuttgart-Untertürkheim after the original factory was destroyed by fire, and again to Berlin in 1922. Other factories were located in Marienfelde (near Berlin) and Sindelfingen (next to Stuttgart).

The first DMG automobile was sold in August 1892 to the Sultan of Morocco. In 1897, the production of light commercial vehicles began. At that time they were popularly called business vehicles, and were very successful in the United Kingdom. At the first Paris Motor Show, in 1898, a 5-ton truck was displayed, with a front-mounted engine. The first truck, of 1.5 tons payload, was sold to London's British Motor Syndicate Ltd on October 1, 1896. Its rear-mounted Phoenix engine produced 4 hp (3 kW) at 700 rpm.

The company started as a petrol engine producer, but after the success of a small number of race cars built on contract by Wilhelm Maybach for Emil Jellinek, it began to produce the Mercedes model of 1902. In 1902, The Mercedes car was built, compact and modern, with many improved features, and Mercedes became DMG's main car brand name. There were some small exceptions: the Mercedes Simplex of 1902-1909, (the name indicating it being "easy to drive") and the Mercedes Knight of 1910-1924, featuring Charles Yale Knight's sleeve-valve engine. All models were priced by their hp-rating.

On October 2, 1902, DMG opened a new works in the mountainous region to the south of Berlin to produce motorboat and marine engines. Later, it expanded into making trucks (1905) and fire trucks (1907). The number of DMG employees rose from 821 in 1903 to 2,200 in 1904), and increased mechanization raised the annual productivity from 0.7 cars per worker, to 10. In 1911, shares of DMG were listed on the Stuttgart stock exchange.

At the outbreak of World War I, in 1914, companies rushed to produce war supplies. In the autumn of 1915, DMG opened a factory at Sindelfingen factory for military vehicles, aircraft engines, and aircraft. After the war the German automobile industry stagnated because of insufficient demand, and because automobiles were taxed by the government as luxury items. Germany also suffered from a petrol shortage. In 1923, DMG production fell to 1,020 units, while Benz & Cie. making 1,382 in Mannheim. The average cost of a car was 25 million marks. Labor strikes and inflation worsened DMG’s circumstances, and the company began to Mercedes bicycles and typewriters, and even issue its own emergency money, in order to survive. In 1919, Benz & Cie. proposed a merger to ensure both companies’ survival, but DMG formally rejected it in December. As the German crisis worsened, the struggling companies met again in 1924 and signed an Agreement of Mutual Interest, valid until the year 2000. They standardized design, production, purchasing, sales, and advertising, marketing their car models jointly while keeping their respective brands.

In June 28, 1926, DMG and Benz & Cie. merged into the Daimler-Benz Company, establishing its headquarters in the Untertürkheim factory. Its automobiles were baptized Mercedes Benz, in honor of DMG's most important car model and the last name of Karl Benz. Its new trademark consisted of a three-pointed star surrounded by the traditional laurels of Karl Benz's logo and labeled Mercedes Benz. The next year, 1927, the number of units sold tripled to 7,918, and diesel truck production was launched.

In 1998 Daimler-Benz AG bought the American automobile manufacturer Chrysler Corporation for US$36 billion, and formed DaimlerChrysler AG. In 2007, the Chrysler group was sold off to Cerberus Capital Management.[4] On October 4, 2007 a DaimlerChrysler Extraordinary Shareholders' Meeting approved the renaming of the company to Daimler AG.[5] The US company adopted the name Chrysler LLC when the sale was completed on August 3, 2007.

The merger was contentious; investors filed lawsuits over whether the transaction was the 'merger of equals' that senior management claimed or actually amounted to a Daimler-Benz takeover of Chrysler. A class action investor lawsuit was settled in August 2003 for US$300 million while a suit by billionaire investor activist Kirk Kerkorian was dismissed on April 7, 2005.[6] The transaction claimed the job of its architect, Chairman Jürgen E. Schrempp, who resigned at the end of 2005 in response to the fall of the company's share price following the transaction.

Critics questioned whether the merger delivered promised synergies and successfully integrated the two businesses. As late as 2002, DaimlerChrysler appeared to run two independent product lines. Later that year, the company launched products that apparently integrated elements from both sides of the company, including the Chrysler Crossfire, which used extensive Mercedes parts and the Dodge Sprinter/Freightliner Sprinter, a re-badged Mercedes-Benz Sprinter van.

In 2006, Chrysler reported losses of US$1.5 billion and announced plans to lay off 13,000 employees in mid-February 2007, close a major assembly plant and reduce production at other plants in order to restore profitability by 2008.[7] Through most of its history, Chrysler had been the third largest of the "Big 3" US auto makers, but in January 2007, DaimlerChrysler, excluding its luxury Mercedes and Maybach lines, outsold its second-place rival Ford, exceeded only by General Motors and Toyota.

The largest shareholder of Daimler AG is the Kuwait Investment Authority with 7.6 percent (as of August 1, 2008).[9]

The regional breakdown of shareholdings as of December 31, 2007 was:[9]

Daimler AG is involved in a joint project with Archer Daniels Midland Company and Bayer CropScience to develop jatropha as a biofuel.[11]

Daimler AG and utility RWE AG are planning a joint electric car and charging station test project in the German capital, Berlin, called "E-Mobility Berlin." It will include more than 100 electric vehicles from Mercedes-Benz and smart and 500 charging points provided by RWE.[12]

Mercedes-Benz is launching its first passenger car model equipped with a hybrid drive system in summer 2009, the Mercedes-Benz S 400 BlueHYBRID.[12]

Daimler Trucks is the world market leader in hybrid systems. With its “Shaping Future Transportation” initiative, Daimler is pursuing a clear-cut objective for trucks and buses. The Mitsubishi Fuso “Aero Star Eco Hybrid” is now setting new standards in practical trials in Japan.[12]

Retrieved from https://www.newworldencyclopedia.org/p/index.php?title=Daimler_AG&oldid=1071157
Categories:
Hidden category:
This page was last edited on 24 June 2022, at 00:05.
Content is available under Creative Commons Attribution/Share-Alike License; additional terms may apply. See Terms of Use for details.