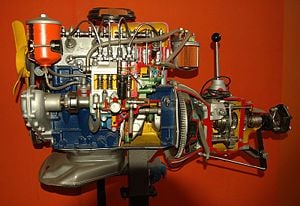 School model of an engine.

An engine is a machine that can convert some form of energy (obtained from a fuel) into useful mechanical power or motion. If the engine produces kinetic energy (energy of motion) from a fuel source, it is called a prime mover; if it produces kinetic energy from a preprocessed "fuel" (such as electricity, a flow of hydraulic fluid, or compressed air), it is called a motor. Thus, the main device that powers an automobile is called an engine. A locomotive is also loosely referred to as an engine.

Usage of the term "engine"

Originally, an engine was a mechanical device that converted force into motion. Military devices such as catapults, trebuchets, and battering rams were referred to as "siege engines." The term "gin" as in cotton gin is recognized as a short form of the Old French word engin, in turn from the Latin ingenium, related to ingenious. Most devices used in the Industrial Revolution were referred to as engines, and this is where the steam engine gained its name.

In more modern usage, the term "engine" is used to describe devices that perform mechanical work, follow-ons to the original steam engine. In most cases, the work is supplied by exerting a torque, which is used to operate other machinery, generate electricity, or pump water or compressed gas. In the context of propulsion systems, an air-breathing engine is one that uses atmospheric air to oxidize the fuel carried, rather than carrying an oxidizer, as in a rocket.

The term is used in computer science in "search engine," "3-D graphics game engine," "rendering engine," and "text-to-speech engine." Although these "engines" are not mechanical and perform no mechanical action, they generate useful output.

Simple machines, such as club and oar (examples of the lever), are prehistoric. More complex engines, using human power, animal power, water power, wind power, and even steam power, date back to antiquity.

Human power was connected to the use of simple engines, such as the capstan, windlass, or treadmill, and with ropes, pulleys, and block and tackle arrangements, this power was transmitted and multiplied. These were used in cranes and aboard ships in Ancient Greece, and in mines, water pumps and siege engines in Ancient Rome. The writers of those times, including Vitruvius, Frontinus, and Pliny the Elder, treat these engines as commonplace, so their invention may be far more ancient. By the first century C.E., various breeds of cattle and horses were used for mills, with machines similar to those powered by humans in earlier times.

According to Strabo, a water-powered mill was built in Kaberia in the kingdom of Mithridates in the first century B.C.E. Use of water wheels in mills spread throughout the Roman Empire over the next few centuries. Some were quite complex, with aqueducts, dams, and sluices to maintain and channel the water, and systems of gears, or toothed-wheels made of wood with metal, used to regulate the speed of rotation. In a fourth century poem, Ausonius mentions a stone-cutting saw powered by water. Hero of Alexandria demonstrated both wind and steam-powered machines in the first century, although it is not known if these were put to any use.

A variety of industrial mills were invented in the Islamic world, including fulling mills, gristmills, hullers, paper mills, sawmills, ship mills, stamp mills, steel mills, sugar refineries, tide mills, and windmills. By the eleventh century, every province throughout the Islamic world had these industrial mills in operation, from the Middle East and Central Asia to al-Andalus and North Africa.[2]

Muslim engineers also invented crankshafts and water turbines, employed gears in mills and water-raising machines, and pioneered the use of dams as a source of water power to provide additional power to watermills and water-raising machines.[3] Such advances made it possible for many industrial tasks that were previously driven by manual labor in ancient times to be mechanized and driven by machinery to some extent in the medieval Islamic world. The transfer of these technologies to medieval Europe later laid the foundations for the Industrial Revolution in eighteenth-century Europe.[2]

In 1206, al-Jazari invented the crankshaft and connecting rod, and he employed them in a crank-connecting rod system for two of his water-raising machines. His invention of the crankshaft is considered one of the most important mechanical inventions after the wheel, as it transforms continuous rotary motion into a linear reciprocating motion, and is central to modern machinery such as the steam engine and the internal combustion engine.[4] In 1551, Taqi al-Din invented a practical steam turbine as a prime mover for rotating a spit. A similar steam turbine later appeared in Europe a century later, which eventually led to the steam engine and Industrial Revolution in Europe.[5]

Animation showing the four stages of the combustion engine cycle

English inventor Sir Samuel Morland allegedly used gunpowder to drive water pumps in the seventeenth century. For more conventional, reciprocating internal combustion engines, the fundamental theory for two-stroke engines was established by Sadi Carnot in France in 1824, and the American Samuel Morey received a patent on April 1, 1826. Sir Dugald Clark (1854–1932) designed the first two-stroke engine in 1878, and patented it in England in 1881.

Karl Benz was one of the leaders in the development of new engines. In 1878, he began to work on new designs. He concentrated his efforts on creating a reliable gas two-stroke engine that was more powerful, based on Nicolaus Otto's design of the four-stroke engine. Karl Benz showed his real genius, however, through his successive inventions registered while designing what would become the production standard for his two-stroke engine. Benz was granted a patent for it in 1879.

In 1896, Karl Benz was granted a patent for his design of the first engine with horizontally opposed pistons. Many BMW motorcycles use this engine type. His design created an engine in which the corresponding pistons move in horizontal cylinders and reach top dead center simultaneously, thus automatically balancing each other with respect to their individual momentums. Engines of this design are often referred to as flat engines because of their shape and lower profile. They must have an even number of cylinders and six, four, or two cylinder flat engines have all been common. The most well-known engine of this type is probably the Volkswagen Beetle engine. Engines of this type continue to be a common design principle for high-performance aero engines (for propeller-driven aircraft) and engines used by automobile producers such as Porsche and Subaru.

Continued use of the internal combustion engine for automobiles is partly due to the improvement of engine control systems (onboard computers providing engine management processes, and electronically controlled fuel injection). Forced air induction by turbocharging and supercharging have increased power outputs and efficiencies available. Similar changes have been applied to smaller diesel engines, giving them almost the same power characteristics as petrol engines. This is especially evident with the popularity of smaller diesel engine propelled cars in Europe. Larger diesel engines are still often used in trucks and heavy machinery. They do not burn as cleanly as gasoline engines, but they have far more torque.

The internal combustion engine was originally selected for the automobile due to its flexibility over a wide range of speeds. Also, the power developed for a given weight engine was reasonable; it could be produced by economical mass-production methods; and it used gasoline, a readily available fuel that was moderately priced. 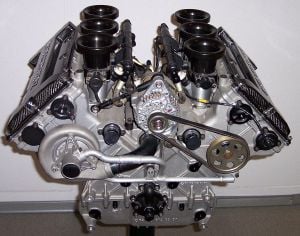 There has been a growing emphasis on the pollution producing features of automotive power systems. This has created new interest in alternate power sources and internal-combustion engine refinements. Although a few limited-production battery-powered electric vehicles have appeared, they have not proved to be competitive owing to costs and operating characteristics. In the twenty-first century the diesel engine has been increasing in popularity with automobile owners. However, the gasoline engine, with its new emission-control devices to improve emission performance, has not yet been significantly challenged.

The first half of the twentieth century saw a trend to increasing engine power, particularly in American models. Design changes incorporated all known methods of raising engine capacity, including increasing the pressure in the cylinders to improve efficiency, increasing the size of the engine, and increasing the speed at which power is generated. The higher forces and pressures created by these changes created engine vibration and size problems that led to stiffer, more compact engines with V and opposed cylinder layouts replacing longer straight-line arrangements. In passenger cars, V-8 layouts were adopted for all piston displacements greater than 250 cubic inches (4 liters).

In Europe, because of economic and other restraints (such as narrower and twisty roads), the design principles leaned toward smaller cars with the higher combustion efficiency of smaller engines. This produced more economical engines with earlier four-cylinder designs rated at 40 horsepower (30 kW) and six-cylinder designs rated as low as 80 horsepower (60 kW), compared with the large volume V-8 American engines with power ratings ranging from 250 to 350 hp (190 to 260 kW).

Earlier automobile engine development produced a much larger range of engines than those in common use today. Engines have ranged from 1 to 16 cylinder designs, with corresponding differences in overall size, weight, piston displacement, and cylinder bores. Four cylinders and power ratings from 19 to 120 hp (14 to 90 kW) were followed in a majority of the models. Several three-cylinder, two-stroke-cycle models were built while most engines had straight or in-line cylinders. There were several V-type models and horizontally opposed two- and four-cylinder makes too. Overhead camshafts were frequently employed. The smaller engines were commonly air-cooled and located at the rear of the vehicle; compression ratios were relatively low.

The 1970s and 1980s saw an increased interest in improved fuel economy, leading to a return to smaller V-6 and four-cylinder layouts, with as many as five valves per cylinder to improve efficiency. The Bugatti Veyron 16.4 operates with a W16 engine, meaning that two V8-cylinder layouts are positioned next to each other to create the W shape. Thus the Veyron has the largest number of cylinders to appear in a production car.

The largest internal combustion engine ever built is the Wärtsilä-Sulzer RTA96-C, a 14-cylinder, 2-stroke turbocharged diesel engine that was designed to power the Emma Maersk, the largest container ship in the world. This engine weighs 2300 metric tons, and when running at 102 RPM produces 109,000 bhp (80,080 kW) consuming some 13.7 metric tons of fuel per hour.

Air-breathing engines use atmospheric air to oxidize the fuel carried, rather than carrying an oxidizer, as a rocket would. Theoretically, this should provide a better specific impulse than rocket engines.

Operation of engines typically has a negative impact upon air quality and ambient sound levels. Although, exhaust contains mostly harmless nitrogen, water vapor, and carbon dioxide; unwanted gases such as carbon monoxide, hydrocarbons, and nitrogen oxides make up only a small part of engine exhaust. In the case of sound levels engine operation is of greatest impact with respect to mobile sources such as automobiles and trucks. Engine noise is a particularly large component of mobile source noise for vehicles operating at lower speeds, where aerodynamic and tire noise is less significant.[6]

Retrieved from https://www.newworldencyclopedia.org/p/index.php?title=Engine&oldid=1064342
Categories:
Hidden category:
This page was last edited on 5 February 2022, at 04:57.
Content is available under Creative Commons Attribution/Share-Alike License; additional terms may apply. See Terms of Use for details.