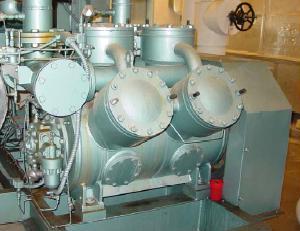 A motor-driven six-cylinder reciprocating compressor that can operate with two, four or six cylinders.

A gas compressor is a mechanical device that increases the pressure of a gas by reducing its volume. Compression of a gas naturally increases its temperature.

Compressors are similar to pumps in that both increase the pressure on a fluid and both can move the fluid through a pipe. As gases are compressible, the compressor also reduces the volume of a gas, whereas liquids, being relatively incompressible, receive from a pump an energy of motion that propels them through a pipe.

There are many different types of gas compressors. Some of the important types are discussed below. 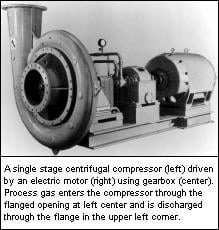 Centrifugal compressors use a vaned rotating disk, or impeller, in a shaped housing to force the gas to the rim of the impeller, increasing the velocity of the gas. A diffuser (divergent duct) section converts the velocity energy to pressure energy. They are primarily used for continuous, stationary service in industrial settings such as oil refineries, chemical and petrochemical plants and natural gas processing plants. Their application can be from 100 horse power (hp) (75 kilowatts, or kW) to thousands of hp. With multiple staging, they can achieve extremely high output pressures greater than 10,000 pounds per square inch (psi) (69 Mega Pascals, MPa).

Many large snow-making operations (like ski resorts) use this type of compressor. They are also used in internal combustion engines as superchargers and turbochargers. Centrifugal compressors are used in small gas turbine engines or as the final compression stage of medium sized gas turbines.

An animation of an axial compressor.

Axial-flow compressors use a series of fan-like rotating rotor blades to progressively compress the gas flow. Stationary stator vanes, located downstream of each rotor, redirect the flow onto the next set of rotor blades. The area of the gas passage diminishes through the compressor to maintain a roughly constant axial Mach number. Axial-flow compressors are normally used in high flow applications, such as medium to large gas turbine engines. They are almost always multi-staged. Beyond about 4:1 design pressure ratio, variable geometry is often used to improve operation.

Diagram of a rotary screw compressor.

Rotary screw compressors use two meshed rotating positive-displacement helical screws to force the gas into a smaller space. These are usually used for continuous operation in commercial and industrial applications and may be either stationary or portable. Their application can be from three hp (2.24 kW) to over 500 hp (375 kW) and from low pressure to very high pressure (>1200 psi or 8.3 MPa). They are commonly seen with roadside repair crews powering air-tools. This type is also used for many automobile engine superchargers because it is easily matched to the induction capacity of a piston engine.

Mechanism of a scroll pump

A scroll compressor, also known as scroll pump and scroll vacuum pump, uses two interleaved spiral-like vanes to pump or compress liquids and gases. The vane geometry may be involute, archimedean spiral, or hybrid curves. They operate more smoothly, quietly, and reliably than other types of compressors.

Often, one of the scrolls is fixed, while the other orbits eccentrically without rotating, thereby trapping and pumping or compressing pockets of fluid between the scrolls.

Diaphragm compressors are used for hydrogen and compressed natural gas (CNG) as well as in a number of other applications. 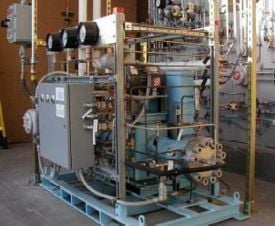 The photograph included in this section depicts a three-stage diaphragm compressor used to compress hydrogen gas to 6,000 psi (41 MPa) for use in a prototype hydrogen and compressed natural gas (CNG) fueling station built in downtown Phoenix, Arizona by the Arizona Public Service company (an electric utilities company). For the prototype fueling station, reciprocating compressors were used to compress the natural gas.

The prototype alternative fueling station was built in compliance with all of the prevailing safety, environmental and building codes in Phoenix to demonstrate that such fueling stations could be built safely in urban areas.

Charles's law says "when a gas is compressed, temperature is raised." There are three possible relationships between temperature and pressure in a volume of gas undergoing compression:

Since compression generates heat, the compressed gas is to be cooled between stages making the compression less adiabatic and more isothermal. The inter-stage coolers cause condensation meaning water separators with drain valves are present. The compressor flywheel may also drive a cooling fan.

For instance in a typical diving compressor, the air is compressed in three stages. If each stage has a compression ratio of 7 to 1, the compressor can output 343 times atmospheric pressure (7 x 7 x 7 = 343 Atmospheres).

There are many options for the "prime mover" or motor which powers the compressor:

Gas compressors are used in various applications where either higher pressures or lower volumes of gas are needed:

Retrieved from https://www.newworldencyclopedia.org/p/index.php?title=Gas_compressor&oldid=1097137
Categories:
Hidden category:
This page was last edited on 23 January 2023, at 07:49.
Content is available under Creative Commons Attribution/Share-Alike License; additional terms may apply. See Terms of Use for details.