In physics, a lever (from French lever, meaning "to raise") is a rigid object that is used with an appropriate fulcrum (pivot point) to multiply the mechanical force that can be applied to another object. The lever allows less effort to be expended to move an object through a distance. This enhancement is also termed mechanical advantage. There are three classes of levers that we come across in our everyday lives. A pry bar and a seesaw are examples of the first class; a door and a wrench are examples of the second class; and a pair of tweezers and a human arm are examples of the third kind.

Levers have been used since prehistoric times for cultivation, excavation, and moving large objects. Such implements as hoes, slings, and oars were conceived and constructed to enhance human effort.

As early as 5000 B.C.E., a simple balance scale employing a lever was used to weigh gold and other items. A Greek device called a steelyard improved on these simple scales by adding a sliding weight to enhance precision. Around 1500 B.C.E., the shaduf, a forerunner of the crane, made its appearance in Egypt and India as a device for lifting containers of water.[1]

The earliest extant writings regarding levers date from the third century B.C.E. and were provided by Archimedes—behind his famous remark Give me the place to stand, and I shall move the earth stands a correct mathematical principle of levers (quoted by Pappus of Alexandria) and of the various methods possibly used by builders.

The principle of the lever tells us that the above is in static equilibrium, with all forces balancing, if F1D1 = F2D2.

Levers are one class of simple machines. Their operation depends on the relative positions of (a) the load; (b) the pivot, called a fulcrum; and (c) the applied effort. To maximize the applied effort, the most effective placement of the fulcrum was found to be close to the load.

The principle of leverage can be derived using Newton's laws of motion, and modern statics. It is important to note that the amount of work done is given by force times distance.

To use a lever to lift a certain unit of weight with an effort of half a unit, the distance from the fulcrum of the spot where force is applied must be twice the distance between the weight and the fulcrum. For example, to halve the effort of lifting a weight resting one meter from the fulcrum, we would need to apply force two meters from the other side of the fulcrum. The amount of work done is always the same and independent of the dimensions of the lever (in an ideal lever). The lever only allows one to trade effort for distance.[2]

There are three classes of levers, representing variations in the location of the fulcrum and the input and output forces. 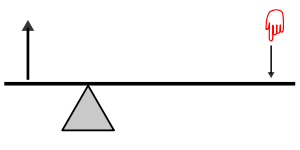 A first-class lever is one in which the fulcrum is located between the input force and the output force. In operation, a force is applied (by pulling or pushing) to a section of the bar, which causes the lever to swing about the fulcrum, overcoming the resistance force on the opposite side. The fulcrum is the center of the lever on which the bar (as in a seesaw) lays upon. This supports the effort arm and the load. 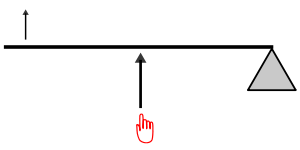 It is to be noted that for this class of levers, the input effort is higher than the output load, which is different from the first-class and second-class levers. However, also notice that the input effort moves through a shorter distance than the load. Thus it still has its uses in making certain tasks easier to do. Third class lever uses the effort in the center, while the output load is on one side, raising the load on the opposite end.