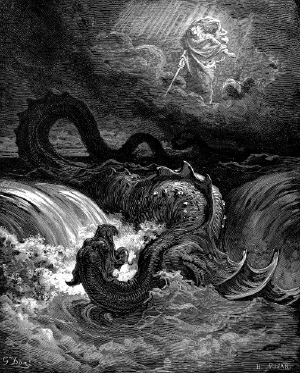 The Leviathan is a Biblical sea monster, a mythical creature referred to in sections of the Old Testament, and while a popular metaphor in both Judaism and Christianity, the creature nonetheless is viewed differently in each religion. The creature can either be seen as a metaphor for the sheer size and power of God's creative abilities, or a demonic beast. In this context, the Leviathan is regarded as the monster of the waters, while the Behemoth and the Ziz are regarded as monsters of the earth and the air, respectively. Outside of religion, leviathan has become synonymous with any large sea creature, particularly whales.

The term Leviathan comes from the old Hebrew name לִוְיָתָן, Livyatan, or Liwyāṯān, which means "Twisted; coiled".[1] When the Old Testament was translated into the Greek it meant the word "dragon." However, in English the original Hebrew word has been transliterated into Leviathan. In Modern Hebrew, it simply means "whale."[2] 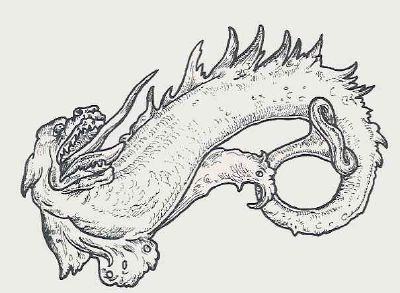 Picture of Leviathan often found in grimoires, by an unknown artist.

Descriptions of the Leviathan vary according to each cultural source. Almost unanimously it is said to be a sea-creature of immense size. Some report that its body resembles that of a whale, with a thick, cylindrical body and fins. Sometimes it is depicted as more of a dragon-like creature, covered in a body of scaly armor, sharp claws, rows of razor teeth, the ability to breath fire, and a thinner, more serpentine body.

The Biblical references to Leviathan appear to have evolved from the Canaanite Baal cycle involving a confrontation between Hadad (Baal) and a seven headed sea monster named Lotan. Lotan is the Ugaritic orthograph for Hebrew Leviathan. Hadad defeats him. Biblical references also resemble the Babylonian creation epic Enûma Elish in which the storm god Marduk slays his mother, the sea monster and goddess of chaos and creation Tiamat and creates the earth and sky from the two halves of her corpse.[3]

Such sea creatures are common to nearly all the ancient civilizations, particularly those that were geographically close to water. Even during the later time of Greek and Roman seafaring, the oceans were a dangerous and mysterious place, in which humans could hardly penetrate to discover what lurked below. Sightings of whales, squid, and other large water animals more than likely fueled the mysterious belief in sea monsters. 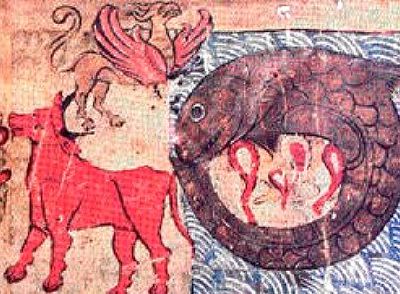 In the Book of Job, both Behemoth and Leviathan are listed alongside a number of other animals that are clearly mundane, such as goats, eagles, and hawks, leading many Christian scholars to surmise that Behemoth and Leviathan may also be mundane creatures. The animal most often proposed for Leviathan is the Nile crocodile, which is aquatic, scaly, and possesses fierce teeth. Others suggest that the Leviathan is an exaggerated account of a whale. This view faces some difficulty, however, as early Jewish people in the Near East would not have likely encountered whales in such a warm region. During sea-faring's Golden Age, European sailors saw Leviathan as a gigantic whale-like sea monster, usually a sea serpent, that devoured whole ships by swimming around the vessels so quickly as to create a whirlpool.

The Leviathan may also be interpreted as the sea itself, with its counterparts Behemoth and Ziz being the land and the air respectively. Some scholars have interpreted Leviathan, and other references to the sea in the Old Testament, as highly metaphorical references to seafaring marauders who once terrorized the Kingdom of Israel. Others liken the mention to Tiamat and other similar monsters who represented the sea as a foe to the gods in myths of nearby cultures.

In the Talmud, the Leviathan is mentioned a number of times. For example:

According to a midrash, the leviathan was created on the fifth day (Yalkut, Gen. 12). Originally, God produced a male and a female leviathan, but lest in multiplying the species should destroy the world, He slew the female, reserving her flesh for the banquet that will be given to the righteous on the advent of the Messiah (Baba Bathra 74a). Famed Rabbi Rashi believed differently:

According to legend this refers to the Leviathan and its mate. God created a male and female Leviathan, then killed the female and salted it for the righteous, for if the Leviathans were to procreate the world could not stand before them.[4]

The festival of Sukkot (Festival of Booths) concludes with a prayer recited upon leaving the sukkah (booth):

May it be your will, Lord our God and God of our forefathers, that just as I have fulfilled and dwelled in this sukkah, so may I merit in the coming year to dwell in the sukkah of the skin of Leviathan. Next year in Jerusalem.

A commentary on this prayer in the Artscroll prayer-book (p. 725) adds:

The Leviathan was a monstrous fish created on the fifth day of Creation. Its story is related at length in the Talmud Baba Bathra 74b, where it is told that the Leviathan will be slain and its flesh served as a feast to the righteous in [the] Time to Come, and its skin used to cover the tent where the banquet will take place.

There is another religious hymn recited on the festival of Shavuot (celebrating the giving of the Torah), known as Akdamut, wherein it says: "...The sport with the Leviathan and the ox (Behemoth)...When they will interlock with one another and engage in combat, with his horns the Behemoth will gore with strength, the fish [Leviathan] will leap to meet him with his fins, with power. Their Creator will approach them with his mighty sword [and slay them both]." Thus, "from the beautiful skin of the Leviathan, God will construct canopies to shelter the righteous, who will eat the meat of the Behemoth [ox] and the Leviathan amid great joy and merriment, at a huge banquet that will be given for them." Some rabbinical commentators say these accounts are allegorical (Artscroll siddur, p. 719), or symbolic of the end of conflict.

In a legend recorded in the Midrash called Pirke de-Rabbi Eliezer it is stated that the whale which swallowed Jonah narrowly avoided being eaten by the Leviathan, which generally eats one whale each day. In a hymn by Kalir, the Leviathan is a serpent that surrounds the earth and has its tail in its mouth, like the Greek Ouroboros and the Nordic Midgard Serpent.

Legend has it that in the banquet after the end of conflict, the carcass of the leviathan will be served as a meal, along with the behemoth and the ziz.

The word "Leviathan" appears six times in the Bible:

The Christian interpretation of Leviathan is often considered to be a demon or natural monster associated with Satan or the Devil, and held by some to be the same monster as Rahab (Isaiah 51:9).

Some interpreters suggest that Leviathan is a symbol of humankind in opposition to God, claiming that it and beasts mentioned in the books of Daniel and Revelation should be interpreted as metaphors.

Leviathan also appears in the Apocryphal Book of Enoch, giving the following description of this monster's origins there mentioned as being female, as opposed to the male Behemoth:

And that day will two monsters be parted, one monster, a female named Leviathan in order to dwell in the abyss of the ocean over the fountains of water; and (the other), a male called Behemoth, which holds his chest in an invisible desert whose name is Dundayin, east of the garden of Eden. (1 Enoch 60:7-8)

According to St. Thomas Aquinas, Leviathan is the demon of envy and the demon who is first in punishing the corresponding sinners. Peter Binsfeld likewise classified Leviathan as the demon of envy, as one of the seven Princes of Hell corresponding to the seven deadly sins. Leviathan became associated with, and may originally have been referred to by, the visual motif of the Hellmouth, a monstrous animal into whose mouth the damned disappear at the Last Judgement, found in Anglo-Saxon art from about 800, and later all over Europe.[5] 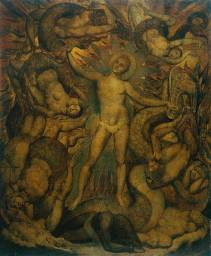 William Blake's painting The Spiritual Form of Nelson Guiding Leviathan, in which the monster is a symbol of military sea-power controlled by Nelson.

Leviathan is the title of Thomas Hobbes' seminal work on the social contract and the creation of an ideal state—the Commonwealth. In Paradise Lost, Milton uses the term Leviathan to describe the size and power of Satan. The term "Leviathan" is often used as a generic term for anything large and all consuming.

Partly due to the influence of Herman Melville's classic, Moby-Dick, the Leviathan has come to be associated by many with the sperm whale. An example of this is in Disney's depiction of Pinocchio's being swallowed (a la Jonah in the Bible) by Monstro, a sperm whale, despite the fact that in the original Italian book, Pinocchio was swallowed by a "Pesce-cane," translated as "dog-fish" or "shark."

The Leviathan appears as a fairly major character in the 1975 science-fiction story The Illuminatus! Trilogy by Robert Shea and Robert Anton Wilson. It is the remnant of the original single-celled life form on the planet. After the first cellular division, one part continued to divide and eventually became the progenitor of all life on earth while the other remained unicellular and grew to monstrous proportions and intelligence, becoming Leviathan.

In his book, In Search of Prehistoric Survivors, cryptozoologist Karl Shuker suggested the Leviathan might be a myth inspired, at least in part, by sightings of a Mosasaur-type sea monster. Bernard Heuvelmans, in his book In the Wake of Sea Serpents (Dans le sillage des monstres marins) considered the entity to be of the "Marine centipede" type.

Retrieved from https://www.newworldencyclopedia.org/p/index.php?title=Leviathan&oldid=1083920
Categories:
Hidden category:
This page was last edited on 25 October 2022, at 22:16.
Content is available under Creative Commons Attribution/Share-Alike License; additional terms may apply. See Terms of Use for details.