Shavuot (or Shavuos; "Weeks") is a Jewish holiday that occurs on the sixth day of the Hebrew month of Sivan (late May or early June), 50 days after Passover. In Christian tradition, it is known as Pentecost.

In the Hebrew Bible, Shavuot is also called the Feast of Weeks, the Festival of Reaping, and Day of the First Fruits. Besides its obvious connection to the wheat harvest, Shavuot commemorates the anniversary of the day God gave the Ten Commandments to Moses and the Israelites at Mount Sinai. It is one of the three biblical pilgrimage festivals known as the shalosh regalim in Jewish tradition.

The date of Shavuot is directly linked to that of Passover. On Passover, the Jewish people were freed from their enslavement to Pharaoh; on Shavuot they were given the Law and became a nation committed to serving God. Shavuot is celebrated in Israel for one day and in the diaspora (outside of Israel) for two days. Reform Jews celebrate only one day, even in the diaspora. Karaite Jews and Christians believe that Shavuot always falls on a Sunday, while mainstream Jews follow the teaching of the Talmud, which holds that the holiday commences immediately after the "counting of the omer," or 50 days after Passover.

Connection with the harvest 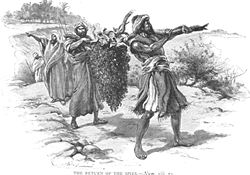 Spies return from Canaan with samples of God's bounty

Shavuot was thus the concluding festival of the grain harvest, just as the eighth day of Sukkot (Tabernacles) was the concluding festival of the fruit harvest. During the existence of the Temple in Jerusalem, an offering of two loaves of bread from the wheat harvest was made on Shavuot (Lev. 23:15-21). Critical scholars believe the holiday of Shavuot thus originated as a harvest festival, with the connection to the giving of the Ten Commandments being added later by priestly authorities. 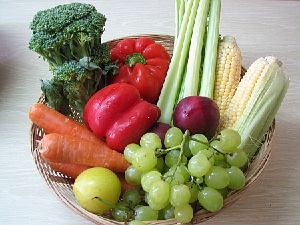 Modern version of the "first fruits."

Shavuot was also the first day on which individuals could bring the bikkurim (first fruits) to the Temple in Jerusalem (Mishnah Bikkurim 1:3). The bikkurim were brought from the seven species for which the Land of Israel was praised in Deut. 8:8: Wheat, barley, grapes, figs, pomegranates, olives, and dates. In the largely agrarian society of ancient Israel, Jewish farmers would tie a reed around the first ripening fruits from each of these species in their fields. At the time of harvest, the fruits identified by the reed would be cut and placed in special baskets woven of gold and silver. The baskets would then be loaded on oxen whose horns were gilded and laced with garlands of flowers, and who were then led in a grand procession to Jerusalem. As the farmer and his entourage passed through cities and towns, they would be accompanied by music and parades.[1]

At the Temple, each farmer would present his bikkurim to a priest in a ceremony that followed the text of Deut. 26:1-10. The text retells the history of the Jewish people as they went into exile in Egypt and were enslaved and oppressed, following which God redeemed them and brought them to the land of Canaan. The ceremony of bikkurim conveys the Jew's gratitude to God both for the first fruits of the field and for his guidance throughout Jewish history. 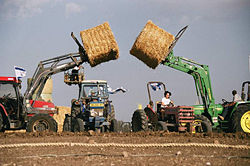 On the Gregorian calendar, Shavuot usually falls around late May or early June. Shavuot is unlike other Jewish holidays in that it involves no prescribed commandments other than the traditional festival observances of prayer services, abstention from work, and holiday meals. However, it is characterized by many customs that have taken on the force of law in traditional Jewish circles.

A mnemonic acronym for these customs is the letters of the Hebrew word acharit (אחרית, "last"). Largely observed in Ashkenazic communities, these customs are:

Akdamut (Aramaic: אקדמות) is a liturgical poem extolling the greatness of God, the Torah, and Israel. It is read publicly in the synagogue just before the morning reading of the Torah on the first day of Shavuot. It was composed by Rabbi Meir of Worms, whose son was murdered during the Crusade of 1096. The traditional melody which accompanies this poem also conveys a sense of grandeur and triumph.

Sephardim do not read Akdamut, but before the evening service they sing a poem called Azharot which sets out the 613 Biblical commandments. The positive commandments are recited on the first day and the negative commandments on the second day. 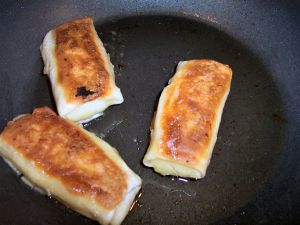 Dairy foods such as cheesecake and blintzes with cheese and other fillings are traditionally served on Shavuot. One explanation for the consumption of dairy foods on this holiday is that the Israelites had not yet received the Torah, with its laws of shechita (ritual slaughtering of animals). As the food they had prepared beforehand was not in accordance with these laws, they opted to eat simple dairy meals to honor the holiday. Others say it hearkens back to King Solomon's supposed portrayal of the Torah as "honey and milk are under your tongue" (Song of Songs 4:11).

The Book of Ruth (מגילת רות, Megillat Ruth) is read publicly in the synagogue on Shavuot. It corresponds to the holiday both in its descriptions of the barley and wheat harvest seasons and Ruth's desire to become a member of the Jewish people, who are defined by their acceptance of the Torah. Moreover, the lineage described at the end of the book lists King David as Ruth's great-grandson; and according to tradition, David was born and died on Shavuot (Sha'arei Teshuvah to Orach Hayyim, 494).

The Book of Ruth is one of five books in Tanakh, that are known as Megillot (Hebrew: מגילות, "scrolls") and are publicly read in the synagogues on different Jewish holidays. The Book of Lamentations, which details the destruction of the Temple of Jerusalem, is the reading for Tisha B'Av, the annual fast day commemorating the destruction of the First and Second Temples in Jerusalem. The Book of Ecclesiastes, which touches on the ephemeral nature of life, corresponds to Sukkot; the Book of Esther (Megillat Esther) retells the events of Purim; and the Song of Songs, which echoes the themes of springtime and God's love for the Jewish people, is the reading for Passover. 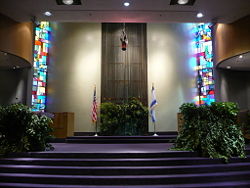 A synagogue sanctuary decked out in greenery in honor of Shavuot.

The use of greenery as a decoration is connected to Shavuot's origins as a harvest festival, but has a religious meaning as well. According to the Midrash, Mount Sinai suddenly blossomed with flowers in anticipation of the giving of the Torah on its summit. Greenery also figures in the story of the baby Moses being found among the bulrushes in a watertight cradle (Ex. 2:3) when he was three months old (Moses was supposedly placed in the Nile River on Sivan 6, the same day he later brought the Jewish nation to Mount Sinai to receive the Torah).

In honor of Shavuot, Jewish families traditionally decorate their homes and synagogues with plants, flowers and leafy branches. Some synagogues decorate the bimah (the elevated platform used for public Torah readings) with a canopy of flowers and plants so that it resembles a chuppah (wedding canopy), as Shavuot is mystically referred to as the day the "matchmaker" (Moses) brought the "bride" (the Jewish people) to the chuppah (Mount Sinai) to marry the "bridegroom" (God). In this interpretation, the ketubbah (marriage contract) was the Torah. Some eastern Sephardic communities read out an actual ketubbah between God and Israel as part of the service.

The custom of all-night Torah study goes back to 1533 when Rabbi Joseph Karo, author of the Shulchan Aruch, invited his colleagues to hold a night-long study vigil, in the course of which an angel supposedly appeared before them and commanded them to go live in the Land of Israel.

According to a story in the Midrash, the night before the Torah was given, the Israelites retired early to be well-rested for the momentous day ahead, but they overslept and Moses had to wake them up because God was already waiting on the mountaintop. To rectify this flaw in the national character, religious Jews stay up all night to study the Torah. During this vigil, any religious subject may be studied, although Talmud, Mishnah, and Torah typically top the list. In many communities, men and women attend classes and lectures until the early hours of the morning. In Jerusalem, thousands of people finish off the nighttime study session by walking to the Western Wall before dawn and joining the sunrise minyan there. The latter activity is reminiscent of Shavuot's status as one of the three Biblical pilgrimage festivals, when the Jews living in the Land of Israel journeyed to Jerusalem to celebrate the holiday.

Other traditions on Shavuot

Tikkun Leil Shavuot In keeping with the custom of engaging in all-night Torah study, Isaac Luria, a leading kabbalist of the sixteenth century, arranged a special service for the evening of Shavuot. Followed only by a minority of Jewish communities, the Tikkun Leil Shavuot ("Rectification for Shavuot Night") consists of excerpts from the beginning and end of each of the 24 books of Hebrew Bible, including the reading in full of several key sections such as the account of the days of creation, The Exodus, the giving of the Ten Commandments, the prayer known as the Shema, and the 63 chapters of Mishnah. This is followed by the reading of the kabbalistic Sefer Yetzirah, the 613 commandments as enumerated by Maimonides, and excerpts from the Zohar, with opening and concluding prayers. This service is printed in a special book, and is widely used in eastern Sephardic and some German and Hasidic communities.

Confirmation Reform Jewish synagogues will typically hold celebrations of confirmation for tenth graders on the evening or morning of Shavuot. The holiday falls around the end of the school year and the giving of the Ten Commandments naturally fits into the theme of continued Jewish learning. 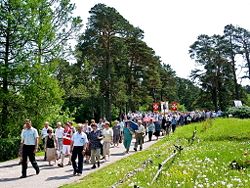 A Christian procession on Pentecost in Lithuania

Since the Torah does not specify the actual day on which Shavuot falls, differing interpretations of this date have arisen both in traditional and non-traditional Jewish circles. These discussions center around two ways of looking at Shavuot: The day the Torah was supposedly given on Mount Sinai and when the counting of the omer is concluded, namely the fiftieth day after Passover.

Karaite Judaism today continues to follow the interpretation that the counting of the omer begins on the Sunday after the first [sabbath]] during Passover, and thus celebrates Shavuot on a Sunday. It bases its view on Leviticus 23:16: "Even unto the morrow after the seventh sabbath shall ye number fifty days." Traditional Jews, on the other hand, adhere to the Talmudic tradition which holds that "sabbath" in this case refers to Passover as a special sabbath day, which means that Shavuot can occur on any day of the week.

The Christian feast of Pentecost, which falls on the fiftieth day counting from Easter, is traditionally on a Sunday.

Retrieved from https://www.newworldencyclopedia.org/p/index.php?title=Shavuot&oldid=1026677
Categories:
Hidden category:
This page was last edited on 3 November 2019, at 05:39.
Content is available under Creative Commons Attribution/Share-Alike License; additional terms may apply. See Terms of Use for details.