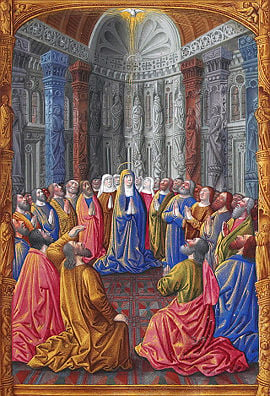 The Descent of the Holy Spirit in a fifteenth century illuminated manuscript. Musée Condé, Chantilly.

Pentecost (Greek: πεντηκοστή [‘ημέρα], pentekostē [hēmera], "the fiftieth day") is one of the prominent feasts in the Christian liturgical year, celebrated the fiftieth day after Easter Sunday. Historically and symbolically related to the Jewish harvest festival of Shavuot, it commemorates the descent of the Holy Spirit upon the Apostles and other followers of Jesus as described in the Book of Acts, Chapter 2.

Pentecost is also called Whitsun, Whitsunday, or Whit Sunday in the United Kingdom and other English-speaking areas.

The Christian term "Pentecost" simply means "fiftieth" from the Greek, Πεντηκοστή. The word derives from the Greek name for Shavuot, one of the three Jewish Pilgrimage Festivals required in the Law of Moses. It is described mainly in Leviticus 23:5-21 [1]and Deuteronomy 16:8-10[2] This celebration marks the beginning of harvest activities, where "a sheaf of the firstfruits" was waved by the priest before Yahweh "on the morrow after the sabbath":

"Even unto the morrow after the seventh sabbaths shall ye number fifty days (Hebrew: hamishshim yom; Greek: πεντήκοντα ‘ημέρας, pentekonta hemeras) and ye shall offer a new meat offering unto the Lord."

This Jewish "new meat offering" consisted of two loaves made from the new wheat (to be waved). Additional, sacrifices for the feast consisted of "seven lambs without blemish of the first year," one young bullock, two rams (this is the burnt offering), the sacrifice of "one kid of the goats for a sin offering," and "two lambs of the first year for a sacrifice of peace offerings."

Regarding this festival, Deuteronomy 16:8-10 states:

The Hebrew name khag shavuot became the best-known name of the feast, and the procedure of calculating khag shavuot remained the same. However, a debate ignited between the Sadducees and Pharisees regarding the interpretation of the words "the morrow after the sabbath." The Sadducees considered the sabbath as the usual weekly day and, therefore, calculated the date of Pentecost as the fiftieth day from the Sunday after passover, a formula used today by the Christian Church. The Pharisees decoded the word "sabbath" from Leviticus 23:15 as referring to the first day of "the feast of unleavened bread," which was, at that time, 15 Nisan. Therefore, they numbered fifty days from 16 Nisan, no matter what day of the week it was. Their formula is nowadays in use in Judaism.

The meaning of Shavuot/Pentecost differs depending on one's religious affiliation. In Rabbinic Judaism, khag shavuot commemorated the giving of the Law on Mount Sinai, because, according to Exodus 19:1[3], this event took place on the fiftieth day after the departure from Egypt.[4] Accordingly, during the Jewish holiday of Shavuot, it is customary to decorate synagogues with greenery because tradition holds that Mount Sinai, despite being in the wilderness of the Sinai desert, miraculously flowered and bloomed in honor of this occasion. The custom of decorating synagogues with greenery on Shavuot, mentioned in many halakhic works, commemorates the miracle, and may perhaps date back to the time of the Jewish Temple. The Mishna records that the Oxen leading the processions bringing "first fruits" to the Temple (which began on Shavuot) wore wreaths of Olive branches on their heads (Bikkurim 3:3). While there are no mishnaic sources for the Temple itself having been decorated with greenery at that time, the Tractate of Midot records there having been one band of flowery engravings surrounding the altar, which may be connected with commemorating the same miracle. What's more, there is no Talmudic record of what was done with the said wreaths following the slaughtering of the oxen. It would seem quite probable that the wreaths would have remained ad loc, decorating the area, in one sense or another.

For most Christians, Pentecost represents the birthday of the Church, signified by the descent of the Holy Spirit. The harvest itself can also be a metaphor of the Final Judgement, as shown by Jesus in Matthew 9:37-38[5]:

"Then saith He unto His disciples, The harvest truly is plenteous, but the labourers are few; Pray ye therefore the Lord of the harvest, that He will send forth labourers into His harvest."

Christians understand Pentecost as a powerful feast of the salvation, because it speaks about the giving of the Law on Mount Sinai, about the founding of the Church, and about the Final Judgement. From a Christian perspective, therefore, Pentecost can be seen as parallel to Shavout, as Easter is to Passover. On Passover, the Jews were delivered from slavery in Egypt; On Easter, mankind was delivered from slavery to sin. On Shavout, the Children of Israel received the Law; On Pentecost, the Church received the fullness of the Holy Spirit.

The events experienced by the Apostles in Jerusalem during khag shavuot were understood by them as the sending of the Holy Ghost, which had been promised by Jesus:

"But the Comforter [παράκλητος], which is the Holy Ghost [το πνευμα το ‘άγιον], Whom the Father will send in My name, He shall teach you all things, and bring all things to your remembrance, whatsoever I have said unto you." (John 14:26 KJV)

It seems that the Apostles were convinced that what happened to them during khag shavuot was indeed a descent of the Holy Spirit; thus, the Peter quotes the entire third chapter of the Book of Joel. The phenomenon was closely linked to the eschaton (the end of the world) by Joel and it is very symptomatic that Peter quoted, on this matter, no other but Joel:

"And it shall come to pass afterward, that I will pour out My spirit upon all flesh; and your sons and your daughters shall prophesy, your old men shall dream dreams, your young men shall see visions:/ And also upon the servants and upon the handmaids in those days will I pour out My spirit./ And I will show wonders in the heavens and in the earth, blood, and fire, and pillars of smoke./ The sun shall be turned into darkness, and the moon into blood, before the great and the terrible day of the Lord come./ And it shall come to pass, that whosoever shall call on the name of the Lord shall be delivered: for in Mount Zion and in Jerusalem shall be deliverance, as the Lord hath said, and in the remnant whom the Lord shall call."

There are, in fact, three major prophetic texts which speak about the Descent of the Holy Spirit: Ezekiel 36:27[6], Isaiah 44:3 [7]and, of course, Joel 3:1-5 (KJV has Joel 2:28-32)[8] . The Christian dogma, based upon John 14:20[9], affirms that the Descent of the Holy Spirit signifies the extension of the divine body of Christ in all the believers, being the last fundamental act of the objective salvation (i.e., the salvation of humankind).

Among Eastern Christians, the descent of the Holy Spirit at Pentecost is also understood as a reversal of the events at the Tower of Babel. There, mankind was divided by the confusion of tongues; here, mankind is united by the gift of tongues.

The Descent of the Holy Spirit Eastern Orthodox Icon of the Descent of the Holy Spirit on the Apostles.

The events took place on the day of the Pentecost, in Jerusalem, at 09:00 ("the third hour of the day," according to Jewish timekeeping). The community of Christ's disciples, approximately 120 people, was gathered "into an upper room" in a building that Tradition locates on Mount Zion. The Tradition also says that it was the same room where Jesus ate His Last Supper. The tremendous phenomenon is very well described in Acts 2:1-4:

"And when the day of Pentecost was fully come, they were all with one accord in one place.
And suddenly there came a sound from heaven as of a rushing mighty wind, and it filled all the house where they were sitting.
And there appeared unto them cloven tongues like as of fire, and it sat upon each of them.
And they were all filled with the Holy Ghost, and began to speak with other tongues, as the Spirit gave them utterance."

The phrase "a rushing mighty wind" is almost a literal translation of the Hebrew word ruah, meaning in Hebrew texts the Spirit of God. The experience is a powerful mystic one, hence the sensation of sacred possession (misinterpreted by passers-by as drunkenness) and the advent of supernatural gifts: the speaking with other tongues (glossolalia) and prophesying. During the Apostolic times, it is said that many of the people who received Christian baptism experienced the same extraordinary gifts.

The baptism of the three-thousand

According to the Book of Acts, the experience of the Pentecost was noticed by all in the large crowd, causing confusion and inspiring awe:

"When they heard this sound, a crowd came together in bewilderment, because each one heard them speaking in his own language…. Then how is it that each of us hears them in his own native language? …Amazed and perplexed, they asked one another, "What does this mean?"" Acts 2:6-12[10]

Then the Apostle Peter, standing with the eleven other apostles, spoke to the crowd. He explained that these strange events had been predicted by the prophet Joel, and that Jesus' resurrection from the dead and exaltation to heaven had been prophesied by David. Peter explained that these events confirmed David's prophecy. Peter then exhorted his listeners to turn to Christ. When Peter was asked what people should do, he responded by saying "Repent, and be baptized every one of you in the name of Jesus Christ for the remission of sins, and ye shall receive the gift of the Holy Ghost." The Bible suggests that about three thousand responded to Peter's sermon. 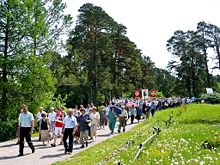 A pilgrim procession of the Way of the Cross, a traditional Roman Catholic celebration of Pentecost in Vepriai, Lithuania

The following Monday is a holiday in much of Europe. The day is known as Whit Monday in England, Wales, and Ireland, and is also celebrated in Iceland, Norway, Denmark, The Netherlands, Poland, Belgium, parts of Switzerland, Germany, Austria and Hungary. Since 1967, however, Whit Monday has not been a public holiday in the United Kingdom; the holiday has been moved to the fixed date of the last Monday in May, which sometimes but by no means always coincides with Whit Monday. Whit Monday also ceased to be a statutory holiday in France in 2005, where the abolishment led to strong protests. Correspondingly, in Sweden Whit Monday is no longer a holiday, and instead June 6 (Swedish National Day) has become a day off.

Ordinations to the diaconate and priesthood are often held on Pentecost.

Pentecost does not fall on the same calendar date every year, yet according to Church tradition, Pentecost is always seven weeks after Easter Sunday; that is to say, 50 days after Easter (inclusive of Easter Day). Said otherwise, it falls on the eighth Sunday, counting Easter Day. Pentecost falls in mid- to late spring in the Northern Hemisphere and mid- to late autumn in the Southern Hemisphere.