Barley is any annual cereal grass of the genus Hordeum, and in particular the species Hordeum vulgare. The term also is used for the edible grain of these plants.

Beyond its own reproduction and development as a plant species, barley also contributes value to human beings. Barley is used as a major animal feed crop, as a popular seasoning, in malting, and in health food. Barley ranks fourth among the cereals in terms of total world production (BarleyWorld 2006). It is a very good source of fiber, selenium, phosphorus, copper, and manganese. Human creativity has resulted in diverse cultivars with preferred properties for various purposes.

Barley is a member of the grass family, Poaceae, one of the largest and most important plant families, which also includes wheat, rice, and sugar cane. There are about 600 genera and perhaps ten thousand species of grasses.

Barley is one of the most important and widely consumed cereals produced in the world. It was one of the first crops domesticated for human consumption and can grow in a large number of environmental conditions. Today, it is useful to people all over the world, most importantly in animal fodder, in brewing beer (when it is malted), and to a less extent in human foodstuffs.

Most commonly, barley refers to Hordeum vulgare L., although other species in the genus are also included. There are many varieties of H. vulgare, all of which can be classified as either a spring or winter type. Winter types require a cold period in order to produce flowers and set seeds, and they are planted in the fall. Spring types do not require this cold period, and for best production they are planted as early in spring as the soil allows. When the reproductive phase is reached, the stems elongate and the flowering head (also referred to as the spike or ear) extends upward. The fertile florets on the flowering head contain both male and female reproductive structures; thus, barley primarily self-pollinates (Katz and Weaver 2003). Barley varieties can also be classified according to the number of kernel heads, which determines the fertility of the florets on the plant (see Cultivars below).

The height of a barley plant averages roughly eighty centimeters, though it can vary greatly depending on the variety and growing conditions. Leaves grow along the barley stems, which in most varieties are coated with a waxy chalk-like deposit of varying density. The shape and size of leaves varies depending on growing conditions and barley variety.

The composition of barley, omitting the salts, is as follows:

Barley can also be classified as six-rowed, four-rowed, or two-rowed, referring to the number of kernal rows in the head. This determines the fertility of the florets on the spike (the spike is the structure containing the flowers and later the mature seeds). In six-rowed barleys (traditionally known as Hordeum vulgare) and four-rowed (Hordeum tetrastichum), all of the florets are fertile. In contrast, in two-rowed types (Hordeum distichum) only the central floret of the three at each node is fertile, and thus just two rows of seeds develop on opposite sides of the rachis (central stem). 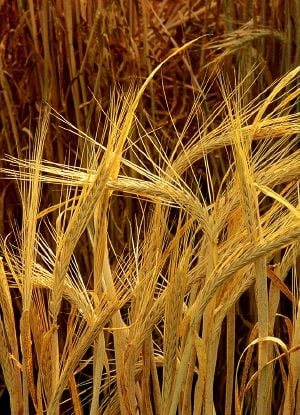 Barley is widely adaptable and is currently a major crop of the temperate and tropical areas. It is likely to be susceptible to barley mild mosaic bymovirus as well as Bacterial blight (Brunt et al. 1996).

Domesticated barley (H. vulgare) is descended from wild barley (Hordeum spontaneum). Both forms are diploid (having two sets of chromosomes, one maternal and one paternal). As wild barley is interfertile with domesticated barley, the two forms are often treated as one species, divided into Hordeum vulgare subsp. spontaneum (wild) and subspecies vulgare (domesticated). The main difference between the two forms is the brittle rachis (main stem) of the former, which enables seed dispersal in the wild.

The earliest finds of wild barley come from Epi-Paleolithic sites in the Levant (region in the Middle East), beginning in the Natufian. The earliest domesticated barley occurs at Aceramic Neolithic sites in the Near East, such as the Pre-Pottery Neolithic B (PPN B) layers of Tell Abu Hureyra in Syria. Barley was one of the first crops domesticated in the Near East, along with einkorn and emmer wheat. Barley is more tolerant of soil salinity than wheat, which might explain the increase of barley cultivation on Mesopotamia from the second millennium B.C.E. onwards. Barley can still thrive in conditions that are too cold even for rye.

Barley was, alongside emmer wheat, a staple cereal of ancient Egypt, where it was used to make bread and beer; together, these often comprised a complete diet. The general name for barley is jt (hypothetically pronounced "eat"); šma (hypothetically pronounced "SHE-ma") refers to Upper Egyptian barley and is a symbol of Upper Egypt. According to Deuteronomy 8:8, barley is one of the "Seven Species" of crops that characterize the fertility of the Promised Land of Canaan, and barley has a prominent role in the Israelite sacrificial cult described in the Pentateuch (see e.g. Numbers 5:15).

In ancient Greece, the ritual significance of barley possibly dates back to the earliest stages of the Eleusinian Mysteries. The preparatory kykeon or mixed drink of the initiates, prepared from barley and herbs, was referred to in the Homeric hymn to Demeter, who was also called "Barley-mother."

Greek practice was to dry the barley groats (whole grains with the husks removed) and roast them before preparing the porridge, according to Pliny the Elder's Natural History (xviii. 72). This produces malt that soon ferments and becomes slightly alcoholic.

Tibetan barley has been the only major staple food in Tibet for centuries. It is made into a flour product called tsampa.

Palaeoethnobotanists have found that barley has been grown in the Korean Peninsula since the Early Mumun Pottery Period (c. 1500–850 B.C.E.) along with other crops including as millet, wheat, and legumes (Crawford and Lee 2003).

Barley was grown in about 100 countries worldwide in 2005. The world production in 1974 was 148,818,870 tons, showing little change in the amount of barley produced worldwide. 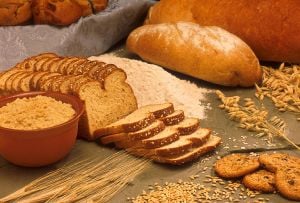 Oats, barley, and some products made from them.

Half of the world's barley production is used as an animal feed. A large part of the remainder is used for malting and is a key ingredient in beer and whiskey production.

Certain barley varieties, called malting barleys, are developed specifically to possess the chemical properties desirable for malting. In beer production, barley is first converted to malt, which is a better substrate for brewing and is essentially a process of truncated seed germination. This barley malt provides the sugars and amino acids for yeast growth, and the yeast converts the sugars to ethyl alcohol in the fermentation process. The two main steps in the production of beer from barley are malting and brewing, and these steps are carried out by separate industries (Katz and Weaver 2003). Non-alcoholic drinks such as barley water and mugicha are also made from barley. Barely is also used in soups and stews, particularly in Eastern Europe. A small amount is used in health foods.

Barley must have its fibrous outer hull removed before it can be eaten. Barley grains with their hulls still on are called covered barley. Once the grain has had the inedible hull removed, it is called hulled barley. At this stage, the grain still has its bran and germ, which are nutritious. Hulled barley is considered a whole grain, and is a popular health food. Pearl barley or pearled barley is hulled barley which has been processed further to remove the bran. It may be polished, a process known as "pearling." Pearled barley can come in three sizes: coarse, medium, and fine. It is good in soups and stews, and when mixed with water and lemon can be used to make barley water, an old-fashioned drink given to the sick (Herbst 2001).

Hulled or pearl barley may be processed into a variety of barley products, including flour, flakes similar to oatmeal, and grits. Barley grits are hulled barley grains that have been cracked into medium-coarse pieces. Hulled and pearl barley may be malted and used in the production of alcoholic beverages.