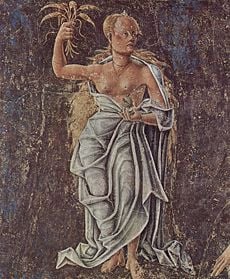 In Greek mythology, Demeter (Greek: "mother-earth" or possibly "distribution-mother" from the noun of the Indo-European mother-earth) is the goddess of grain and agriculture, the pure nourisher of youth and the green earth, the health-giving cycle of life and death, and preserver of both marital fertility and the sacred law. She is invoked as the "bringer of seasons" in the Homeric hymn, a subtle sign that she was worshiped long before the Olympians arrived. The Homeric Hymn to Demeter has been dated to sometime around the seventh century B.C.E.[1] She and her daughter Persephone were the central figures of the Eleusinian Mysteries, which also predate the Olympian pantheon. The Roman equivalent is Ceres, from whom the word "cereal" is derived.

Demeter is easily confused with Gaia or Rhea, and with Cybele. The goddess' epithets reveal the span of her functions in Greek life. Demeter and Kore ("the maiden") are usually invoked as to theo ('"The Two Goddesses"), and they appear in that form in Linear B graffiti at Mycenaean Pylos in pre-classical times. A connection with the goddess-cults of Minoan Crete is quite possible.[2]

According to the Athenian rhetorician Isocrates, the greatest gifts that Demeter gave were cereal, which set humans apart from wild animals, and the mysteries, which give humankind higher hopes in this life and the next.[3]

In various contexts, Demeter is invoked with many epithets:

For the Greeks, Demeter was still a poppy goddess,
Bearing sheaves and poppies in both hands. — Idyll vii.157

In a clay statuette from Gazi,[4] the Minoan poppy goddess wears the seed capsules, sources of nourishment and narcosis, in her diadem. "It seems probable that the Great Mother Goddess, who bore the names Rhea and Demeter, brought the poppy with her from her Cretan cult to Eleusis, and it is certain that in the Cretan cult sphere, opium was prepared from poppies."[5]

Major sites for the cult of Demeter were not confined to any localized part of the Greek world: there were sites at Eleusis, in Sicily, Hermion, in Crete, Megara, Celeae, Lerna, Aegila, Munychia, Corinth, Delos, Priene Akragas, Iasos, Pergamon, Selinus, Tegea, Thorikos, Dion, Lykosoura, Mesembria, Enna, and Samothrace. Indeed, Mikalson notes that, the various cults of Demeter "were open to all Greeks."[6] In addition to primary role of Demeter in the pan-Hellenic Mystery Religion (discussed below), worship of the goddess also took other forms:

In sanctuaries of Demeter there was generally no 'normal' temple, though there were some buildings. For example, the sanctuary of Demeter and Kore on Corinth was laid out on three terraces, on the lower slope of the hill overlooking the city. The lowest terrace, which was used for dining, had thirty dining rooms, with couches for 200 people; the middle terrace had pits for sacrifice and other offerings, but neither a temple nor a normal altar; the highest terrace had two theatre areas cut into the rocks, with space for 80 to 90 spectators.[7]

Demeter was revered in Hellenic (and pre-Hellenic) world for teaching mankind the arts of agriculture: sowing seeds, ploughing, harvesting, etc.[8] She was especially popular with rural folk, partly because they most benefited directly from her assistance, but also because rural folk are more conservative about keeping to the old ways. Demeter herself was central to the older religion of Greece. Relics unique to her cult, such as votive clay pigs, were being fashioned in the Neolithic, and both they and the animals that they represented were frequently sacrificed to the goddess.[9] In Roman times, sows continued to be sacrificed to Demeter (as Ceres) at various significant times: feast days, weddings, funerals, and on other meaningful dates.[10]

Without a doubt, the most important role of Demeter was as a goddess of the Elusinian mystery religion. In this capacity, her primary function was to provide the cultic adherents with hope for eternal life (or a pleasant afterlife). Though little is known of the specifics of worship, it appears that it involved a hidden knowledge (gnosis) being shared by the participants:

The object of the [mystery] is to place the [participant] in a peculiarly close and privileged relation with the divinity or the deified spirit.... all of the members of the city, gens or household could freely join in the cult, if they were in the ordinary condition or ritualistic cleanliness; and the sacrifice that the priest performed for the state might be repeated by the individual, if he chose to do so, for his own purposes at his own house-altar. Both in the public and in the mystic service a sacrifice of some sort was requisite, and as far as we can see the religious conception of the sacrifice might be the same in both. But in the former the sacrifice with the prayer was the chief act in the ceremony, in the latter it was something besides the sacrifice that was of the essence of the rite; something was shown to the eyes of the initiated, something was done: thus the mystery[.][11]

These rites are one of the most compelling enigmas in human religious history, as the vow of secrecy that all participants were obliged to take has remained largely unbroken—meaning that many elements of these practices have been lost to the mists of time.[12]

Demeter and Poseidon's names are linked in the earliest scratched notes in Linear B found at Mycenaean Pylos, where they appear as PO-SE-DA-WO-NE and DA-MA-TE in the context of sacralized lot-casting. The 'DA' element in each of their names is seemingly connected to an Proto-Indo-European root relating to distribution of land and honors (compare Latin dare "to give").[13] Poseidon (his name seems to signify "consort of the distributor") once pursued Demeter, in her archaic form as a mare-goddess. She resisted the sea king's advances, but she could not disguise her divinity among the horses of King Onkios. Poseidon became a stallion and "covered" (read: violated) her. Demeter was literally furious ("Demeter Erinys") at the assault, but washed away her anger in the River Ladon ("Demeter Lousia"). She bore to Poseidon a daughter, whose name could not be uttered outside the Eleusinian Mysteries, and a steed named Arion, with a black mane.[14] In Arcadia, Demeter was worshiped as a horse-headed deity into historical times:[15]

The second mountain, Mt. Elaios, is about 30 stades from Phigaleia, and has a cave sacred to Demeter Melaine ["Black"]... the Phigalians say, they accounted the cave sacred to Demeter, and set up a wooden image in it. The image was made in the following fashion: it was seated on a rock, and was like a woman in all respects save the head. She had the head and hair of a horse, and serpents and other beasts grew out of her head. Her chiton reached right to her feet, and she held a dolphin in one hand, a dove in the other. Why they made the xoanon like this should be clear to any intelligent man who is versed in tradition. They say they named her Black because the goddess wore black clothing. However, they cannot remember who made this xoanon or how it caught fire; but when it was destroyed the Phigalians gave no new image to the goddess and largely neglected her festivals and sacrifices, until finally barrenness fell upon the land. [16]

Demeter, Persephone and the Eleusinian Mysteries

The central myth of Demeter, which is at the heart of the Eleusinian Mysteries, is her relationship with Persephone, her daughter through a dalliance with Zeus. In the tale, Persephone becomes the unwilling consort of Hades (Roman Pluto, the underworld god of wealth) and is taken from her mother's side into her new spouse's dusky kingdom. Demeter, distraught over the loss of her precious daughter, devoted the entirety of her time and attention to seeking her, which had the consequence of halting the progression of seasons. During her search, she had many additional adventures (discussed below), though none of them were sufficient to distract her from her maternal concerns. Eventually, the situation on Earth grew so dire that Zeus found it necessary to intercede directly, imploring his brother to return Persephone to her mother. Before she was released, however, Hades tricked her into eating six pomegranate seeds, which forced her to return to his realm for six months each year. When Demeter and her daughter were together, the earth flourished with vegetation. But for six months each year, when Persephone returned to the underworld, the earth once again became a barren realm. This myth, in addition to providing an aetiological explanation for the progression of the seasons, also explain the connection between Demeter/Persephone and the Eleusinian Mysteries (which were centered around the achievement of eternal life).[17] 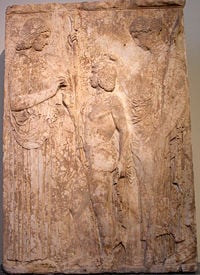 The Eleusinian trinity: Persephone, Triptolemos and Demeter, on a marble bas-relief from Eleusis, 440-430 B.C.E.

While Demeter was searching for her daughter Persephone, she found it expedient to adopt the guise of an old woman (Doso). In this form, she received a hospitable welcome from Celeus, the king of Eleusis in Attica (and also Phytalus). He asked her to nurse Demophon and Triptolemus, his sons by Metanira.

As a gift to Celeus (in thanks for his hospitality), Demeter planned to make Demophon as a god, which was achieved by coating and anointing him with Ambrosia, breathing gently upon him while holding him in her arms and bosom, and by burning away his mortal spirit in the family hearth every night. Unfortunately, Demeter was unable to complete the ritual because one night Metanira (the child's mother) walked in and saw her son in the fire and screamed in fright. This angered the fertility goddess, who lamented that foolish mortals did not understand the power of her ritual.

Instead of making Demophon immortal, Demeter chose instead to repay her host's generosity by teaching Triptolemus the art of agriculture. From him, the rest of Greece learned to plant and reap crops.[18]