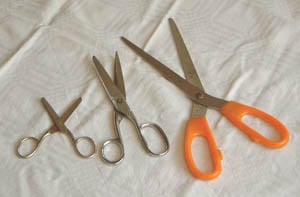 A pair of scissors is a hand-operated cutting instrument consisting of a pair of metal blades connected at a pivot, such that the blades meet and cut materials placed between them when the handles are brought together. The word shears is used to describe larger instruments of similar kind. As a general rule, a pair of scissors has blades shorter than 15 centimeters (cm) (or 6 inches (in)) and the handles have finger holes that are usually equal in size. By contrast, a pair of shears has blades longer than 15 cm and the handles are often unequal in size, such that the smaller handle has a hole to fit the thumb and the larger handle has a hole that can accommodate two or more fingers.

Scissors and shears are available in a wide variety of forms depending on their intended applications. They are used for cutting various materials such as paper, thin plastic, cardboard, metal foil, cloth, rope, wire, hair, and food. Children's scissors, used only on paper, have dull blades and rounded points (blunt tip) to ensure safety. Scissors used to cut hair or fabric must be much sharper. Sewing scissors often have one sharp point and one blunt point for intricate cutting of fabric, and nail scissors have curved blades for cutting fingernails and toenails.

Pinking shears have notched or serrated blades that cut cloth to give it a wavy or zigzag edge, and thinning shears have teeth that thin hair rather than trim it. Large shears with very strong blades are used to cut metal or trim shrubs.

The word scissors (or shears) is treated as a plural noun and therefore takes a plural verb, as in "these scissors are …" Alternatively, this tool may be referred to as "a pair of scissors," in which case it (a pair) is singular and therefore takes a singular verb, as in "this pair of scissors is …" (In theory, each of the two blades of the tool is a "scissor," although in practice such usage is seldom heard.) 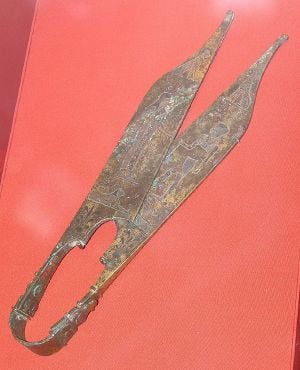 The earliest known scissors appeared in the Middle East about 3000 or 4000 years ago. They were of the type known as "spring scissors," consisting of two bronze blades connected at the handles by a thin, curved strip of bronze. This strip served to bring the blades together when squeezed and to pull them apart when released. Scissors dating back to the fourteenth century B.C.E. have been found in ancient Egypt.[1]

Cross-bladed scissors were invented by the Romans around C.E. 100.

Pivoted scissors of bronze or iron, in which the blades were connected at a point between the tips and handles, were used in ancient Rome, China, Japan, and Korea. Spring scissors continued to be used in Europe until the sixteenth century, and the idea is still used in almost all modern scissors.

During the Middle Ages and Renaissance, spring scissors were made by heating a bar of iron or steel, then flattening and shaping its ends into blades on an anvil. The center of the bar was heated, bent to form the spring, then cooled (tempered) and reheated to make it flexible.

Pivoted scissors were not manufactured in large numbers until 1761, when Robert Hinchliffe produced the first pair of modern-day scissors made of hardened and polished cast steel. He lived in Cheney Square, London, and was reputed to be the first person to put out a signboard proclaiming himself "fine scissor manufacturer".[2]

During the nineteenth century, scissors were hand-forged with elaborately decorated handles. They were made by hammering steel on indented surfaces known as bosses to form the blades. The rings in the handles, known as bows, were made by punching a hole in the steel and enlarging it with the pointed end of an anvil.

In a part of Sweden (now in Finland) an ironworks was started in 1649 in the hamlet "Fiskars" between Helsinki and Turku. In 1830, a new owner started the first cutlery works in Finland, making, among other items, scissors with the trade mark Fiskars. Fiskars Corporation introduced new methods in the manufacture of scissors in 1967.[3]

A pair of scissors consists of two pivoted blades. Most types of scissors are not particularly sharp; it is primarily the shearing between the two blades which cuts. Children's scissors are even less sharp, and the blades are often protected with plastic.

Specialized scissors, like bolt cutters, exploit leverage by having long handles requiring operation by two strong arms, but placing the material to be cut close to the fulcrum. 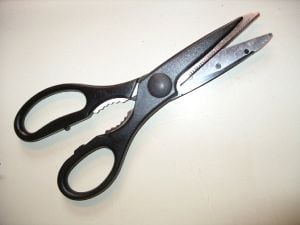 A pair of kitchen scissors.

Kitchen scissors, also known as kitchen shears, are similar to common scissors. The main difference is the location of the fulcrum. Kitchen scissors have the fulcrum located farther from the handles to provide more leverage and thus more cutting power. High quality kitchen scissors can easily cut through the breastbone of a chicken. Some are constructed allowing the two blades disassemble for thorough washing. 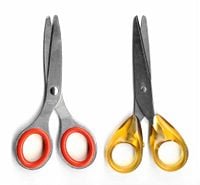 Some scissors are marketed as ambidextrous. They have symmetric handles so there is no distinction between the thumb and finger handles, and they have very strong pivots so that the blades simply rotate and do not have any lateral give. However, most "ambidextrous" scissors are in fact still right-handed. Even if they cut successfully, the blade orientation blocks the view of the cutting line for a left-handed person. True ambidextrous scissors are possible if the blades are double-edged and one handle is swung all the way around (to almost 360 degrees) so that the back of the blades become the new cutting edges. Patents have been awarded for true ambidextrous scissors.[4][5]

Using scissors designed for the wrong hand is difficult for most people, even for left-handers who have become accustomed to using the more readily available right-handed scissors. They have to unnaturally force the blades together to cut and look over the top blade to see what is being cut. This unnatural motion can also cause marks on the hand, sores, and eventually calluses. An alternative adaption is to use the scissors upside down, with the blade tips pointing toward the body, allowing the dominant hand to better manipulate the cutting action. 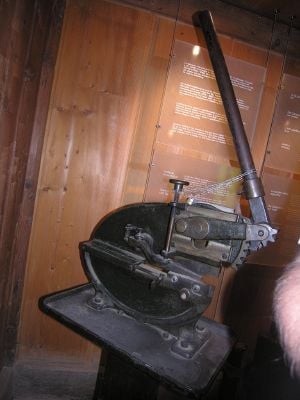 Although often used interchangeably with "scissors," the term shears is used by people in the industry for scissors longer than 15 cm (about 6 inches). In addition, some assert that a pair of scissors has symmetric handles, whereas a pair of shears has a smaller handle shaped for the thumb and a larger handle for two or more fingers.[6] Like scissors, shears combine slightly offset jaws to cut material through physical shear, and combine this with levers to apply a considerable shear force. Shears are usually intended for cutting much heavier material, such as leather, than scissors do.

There are several specialized scissors and shears used for different purposes. Some of these are: