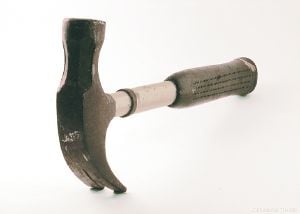 A modern hammer is directly descended from ancient hand tools.

A tool may be defined as a device or piece of equipment that is used to facilitate or accomplish a mechanical task. A broader definition of a tool is an entity used to interface between two or more domains, to facilitate more effective action of one domain on the other.

The most basic tools are simple machines. For example, a hammer typically interfaces between the operator's hand and the nail the operator wishes to strike. A saw interfaces between the carpenter and the piece of wood being cut. A crowbar functions as a lever: when pressure is exerted farther away from the pivot point, greater force is transmitted along the lever. Also, in communications technology, a telephone (or the phone system) is a tool that allows communication between people. In computer science, a tool is a software program that may generate, modify, or analyze other programs.

Evidence of the manufacture and use of stone tools dates back to the beginnings of the Stone Age, although it is possible that earlier tools of less durable material may not have survived. Stone tools found in China have been dated (magnetostratigraphically) to approximately 1.36 million years ago. The transition from stone to metal tools roughly coincided with the development of metal smelting, agriculture, and animal domestication around the fourth millennium B.C.E. Early metal tools were made of copper and then bronze, followed by iron.

The production of new tools surged during the Industrial Revolution, in the form of machine tools. Advocates of nanotechnology expect a similar surge as tools become microscopic in size.[1][2]

Types of tools and their functions

A machine tool is a powered mechanical device, typically used to fabricate metal components of machines by machining, which is the selective removal of metal. The term machine tool is usually reserved for a tool that uses a power source other than human effort, but it may also be powered by a person if appropriately set up. Examples of machine tools include lathes, broaching machines, hobbing machines, shapers, planers, Stewart platform mills, and grinders.

Often, by design or coincidence, a tool may share key functional attributes with one or more other tools. In this case, some tools can substitute for other tools, either as a make-shift solution or as a matter of practical efficiency. "One tool does it all" is a motto of some importance for workers who cannot practically carry every specialized tool to the location of every work task.

Tool substitution may be divided broadly into two classes: substitution "by design" (or "multi-purpose" use) and substitution as "make-shift." In many cases, the designed secondary functions of tools are not widely known. As an example of the former, many wood-cutting hand saws integrate a carpenter's square by incorporating a specially shaped handle that allows 90° and 45° angles to be marked by aligning the appropriate part of the handle with an edge and scribing along the back edge of the saw. The latter is illustrated by the saying "All tools can be used as hammers." Many tools may be used as hammers, even though few tools are intentionally designed for that purpose.

Protective gear is recommended for people who use tools. Personal protective equipment includes such items as gloves, safety glasses, ear defenders, and biohazard suits. These items themselves are not considered tools, because they do not directly help perform work but they protect the worker from injury.

Most anthropologists believe that the use of tools was an important step in the development of human civilization.[3] Humans have an opposable thumb—useful in holding tools—and increased dramatically in intelligence, which aided in the use of tools.[4]

It is in the domain of media and communications technology that a counter-intuitive aspect of our relationships with our tools first began to gain popular recognition. Marshall McLuhan famously said "We shape our tools. And then our tools shape us." McLuhan was referring to the fact that our social practices adapt with our use of new tools and the refinements we make to existing tools.

Philosophers once thought that only humans had the ability to make and use tools. It has, however, been observed that various other species can use tools, including monkeys, apes, sea otters, and several types of birds. In addition, zoologists have reported that some birds and monkeys can make tools.[5][6][7]

Many now think that the unique relationship between humans and tools is that we are the only species that uses tools to make other tools.