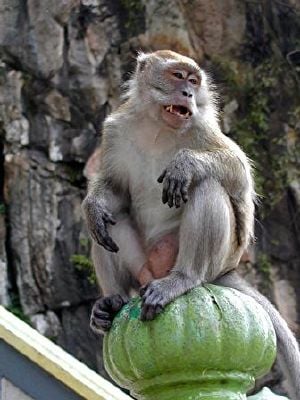 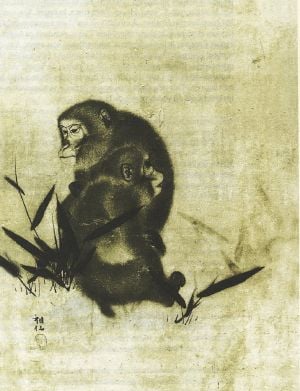 The biological order primates is divided informally into three main groupings: prosimians, monkeys of the New World, and monkeys and apes of the Old World. Together, the New World monkeys and the Old World monkeys and apes are considered to be "higher primates," or simians (infraorder Similformes), while the prosimians (such as lemurs) are considered to be the "lower primates." The term monkey thus refers to any simian that is not an ape. The term may also be defined as any primate that is not an ape (including humans) or a prosimian. In reality, monkeys are not a single coherent group and therefore do not have any particular traits that they all share.

Humans and monkeys are so similar that researchers even study behaviors of monkeys, such as a sense of "fairness," to try and better understand the origin of human behaviors (see below). However, despite the genetic and anatomical similarities, humans remain radically unique from other primates in many aspects, including having complex technologies, complex spoken and written languages, highly developed cultural institutions, unique moral and religious beliefs, and so forth.

Apes, such as chimpanzees and gibbons, are sometimes incorrectly called monkeys because of their similarity to monkeys. Also, a few monkey species have the word ape in their common name, but are not true apes.

Monkeys range from the size of a mouse to that of a medium-sized dog. The pygmy marmoset, for instance, is only about five inches (14 centimeters) long, including its tail, and weighs four to five ounces (120 to 140 grams). The male mandrill, on the other hand, measures almost three feet (one meter) in length and weighs 75 pounds (35 kilograms). Some monkeys are arboreal (living in trees), while others, like macaques and baboons, spend more time on the ground.

Diets, which differ among the various species, may include: fruit, leaves, seeds, nuts, flowers, insects, spiders, eggs, and small animals such as bats. All monkeys use their hands and feet for holding onto branches.

The species within each group share some general characteristics.

According to the Oxford English Dictionary, the name monkey may come from a German version of the Reynard the Fox fable, published in the late sixteenth century. In this version, a character named Moneke is the son of Martin the Ape. The word Moneke may have been derived from the Italian monna, which means "a female ape." The name Moneke persisted over time likely due to the popularity of Reynard the Fox.

A group of monkeys is called a mission or a tribe. 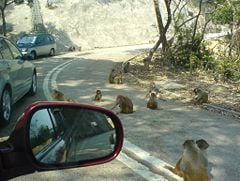 The following list shows where the various monkey families are placed in the primate classification. Note that the smallest grouping that contains them all is the simiiformes—the simians—which also contains the apes.

The Old World monkeys or Cercopithecidae are a group of primates, falling in two subfamilies in the clade Catarrhini (Groves 2001). Those monkeys in the subfamily Cercopithecinae are mainly African but include the diverse genus of macaques that live in Asia and North Africa. The subfamily Colobinae make up most of the Asian genera, but also include the African colobus monkeys.

From the point of view of superficial appearance, Old World monkeys are unlike apes in that most have tails (the family name means "tailed ape"), and unlike the New World monkeys in that their tails are never prehensile.

Several Old World monkeys have anatomical oddities. Colobus monkeys have a stub for a thumb. The proboscis monkey has an extraordinary nose while snub-nosed monkeys have almost no nose at all. Male mandrills have a red penis and lilac-colored scrotum, and their faces also have bright coloration. Alpha males, the dominant male in a group with several males, have the brightest coloration.

The Old World monkeys are native to Africa and Asia today, but are also known from Europe in the fossil record. They include many of the most familiar species of non-human primates.

The New World monkeys are the four families of primates, the Cebidae, Aotidae, Pitheciidae, and Atelidae, that are found in Central and South America (Groves 2001). The four families are ranked together as the Platyrrhini clade.

All New World monkeys differ slightly from Old World monkeys in many aspects, but the most prominent of which is the nose. This is the feature used most commonly to distinguish between the two groups. The scientific name for New World monkey, Platyrrhini, means "flat nosed," therefore the noses are flatter, with side facing nostrils, compared to the narrow noses of the Old World monkey.

Monkeys in captivity and research

When the British first began to explore Africa, young monkeys were often captured to provide entertainment during long voyages. Some were later transferred to domestic zoos, and in fact many modern captive monkeys in the United Kingdom are descended from individuals captured during the Napoleonic and Victorian eras.

Some monkeys are kept as pets today. There is some opposition to this practice on moral grounds. In addition, the animals have been known to become aggressive as they age, even toward their owners. Monkeys raised as pets are often given to zoos and sanctuaries when they get older, though some people report having long and rewarding relationships with monkeys.

In most large metropolitan areas in the United States, it is illegal to keep monkeys in private homes. Even in places where they are legal, a permit from the U.S. Department of Agriculture is usually required. Their legal status as pets varies in other countries.

Macaques, especially rhesus monkeys, and African green monkeys are widely used in animal testing facilities. This is primarily because of their relative ease of handling, their fast reproductive cycle (compared to apes), and their psychological and physical similarity to humans. In the United States, around 50,000 non-human primates, most of them monkeys, were used in experiments every year between 1973 and 2003 (APHIS 2004); 10,000 monkeys were used in the European Union in 2004. Use of monkeys in laboratories is highly controversial. Many claim that the practice is cruel and produces little information of value, and there have been many protests and instances of vandalism against it. However, defenders of testing on monkeys say that the research has led to many important medical breakthroughs, and that the prevention of harm to humans should be a higher priority than the harm done to monkeys. The topic has become a popular cause for animal rights groups.

Monkeys and humans are so similar in anatomy and genetics that they are popularly studied to try and understand more about human physiology, health, and even behavior. For example, researchers have compared a sense of "fairness" found in capuchin monkeys (Cebus apella) with humans. In reality, however, despite the anatomy and genetic similarities, the divergence between monkeys and humans is immense, whether one is discussing cultural aspects (political and educational systems, religious traditions, scientific discoveries), language (use of symbols in language, written and spoken languages), or sense of self-awareness and complex technologies.