Mandrill (Mandrillus sphinx) is an Old World monkey (family Cercopithecidae), characterized by large size, long limbs, stubby upright tail, light brown or olive-colored fur, and, in males, a bright red nose bordered by blue as well as a red and blue rump, with duller colors in females. The mandrill is the world's largest species of monkey. It is one of only two species in the genus Mandrillus, the other being the Drill (Mandrillus leucophaeus). The mandrill is closely related to the baboons and was once classified together with them in the genus Papio. The word "mandrill" means "Man-Ape." Mandrills are found in tropical rainforests of West Africa (Grzimek et al. 2004).

As with other taxa, mandrills provide a larger function for the ecosystem and humans while also advancing their own individual function of survival, self-maintenance, and reproduction. Ecologically, they play a role in food chains in their rainforest environment, consuming vegetative materials (fruits, seeds, roots, and so forth) and various invertebrates (insects, snails, worms) and vertebrates (snakes, frogs, and so on), while being consumed by leopards and other large predators. It is likely that they also play a role in seed dispersal (Ingmarsson 1999). For humans, they serve as a source of bushmeat, but also are popular attractions in zoos or on ecotours, given their colorful appearance, long lifespan, and unique behaviors. Remarkably, they also are very adept at removing articles from visitors of zoos, such as glasses or pipes.

Mandrills are Old World monkeys, which, along with apes of the Old World, comprise one of the three major informal groups of the biological order Primates, the other two groups being prosimians and New World monkeys. Together, the New World monkeys and the Old World monkeys and apes are considered to be "higher primates," or simians (infraorder Similformes), while the prosimians (such as lemurs) are considered to be the "lower primates." The term monkey, thus, refers to any simian that is not an ape or any primate that is neither an ape or a prosimian. In reality, monkeys are not a single coherent group and therefore do not have any particular traits that they all share.

At one point, mandrills were grouped in the genus Papio with baboons, the drill, and the gelada (genus Theropithecus), but recent research has determined that the mandrill and drill should be separated into their own genus, Mandrillus. However, these monkeys are still often referred to as baboons in everyday speech. 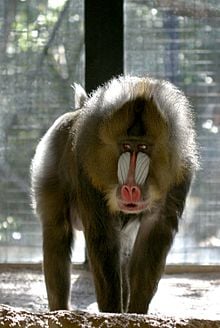 At the Milwaukee County Zoological Gardens

The coloration in general becomes more pronounced as the monkey becomes excited and is likely to be an example of sexual selection. The coloration on the rump is thought to enhance visibility in the thick vegetation of the rainforest and aid in group movement.

Mandrills are very large, and the sexual dimorphism seen in the coloration is also exhibited in body size, with males twice as large as the females in weight (Grzimek et al. 2004). Males may weight up to 31.6 kilograms (69 pounds, 11 ounces), while females may weight 12.9 kilograms (28 pounds, 7 ounces) (Grzimek et al. 2004). Unusually large males can weigh 50 kilograms (110 pounds) (WAZA 2008). Males can grow to about 1 meter in length (head and body), while females may be about half that size. The tails of males and females are short.

The drill (Mandrillus leucophaeus) is similar in appearance to the mandrill, but lacks the colorful face. It is found only in Cameroon, Nigeria, north of the Sanaga River, and on the coastal island of Bioko, part of Equatorial Guinea. The drill is one of Africa's most endangered primates. 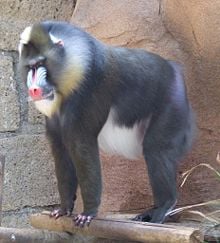 At the Las Aguilas Jungle Park—Tenerife

Mandrills are found in the tropical rainforests of southern Nigeria, southern Cameroon, Gabon, Equatorial Guinea, and Congo. Their distribution is bounded by the Sanaga River to the north and the Ogooué and Ivindo rivers to the east. Recent research suggests that mandrill populations north and south of the Ogooué river are genetically so different as to be different sub-species.

Mandrills are semi-arboreal and diurnal, sleeping at night in trees and foraging on the ground during the day (Grzimek et al. 2004).

Mandrills are social creatures and live in large groups. These large, multimale groups may be aggregates of single-male groups (Grzimek et al. 2004), primarily including females and young and led by a single dominant male. Most adult males are solitary. It is difficult to accurately estimate group size in the forest, but filming a group crossing a gap between two forest patches or crossing a road is a reliable way of estimating group size. The largest group verifiably observed in this way contained over 1300 individuals, in Lopé National Park, Gabon.

The mandrill is an omnivore and acquires its food by foraging, generally preferring fruits and seeds, as well as consuming leaves, stems, bark, and fungi, and including in their diet some invertebrates (insects, snails, worms) and vertebrates (generally smaller animals, such as lizards, frogs, and snakes). Although the mandrill does not normally hunt larger prey, males have been observed to hunt and consume duiker (a small antelope). A large group of mandrills can cause significant damage to crops in a very short time, and where common they are widely perceived as pests.

The mandrill's main natural predator is the leopard. Mandrills are hunted by humans for food throughout their range, either with guns or using dogs and nets. In Cameroon, habitat loss to agriculture is also a threat to their populations. 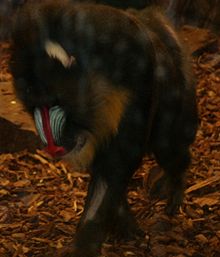 Mandrills are polygamous. Small but prominent sexual swellings in the females become bright red as they become maximally swollen near the time of ovulation (Grzimek et al. 2004). During courtship, the male will walk after the female as the female leads. The male will then make little courtship noises, baring his teeth and vocalizing softly. If the female likes what she hears she will orientate her rear towards the male. The male will mount her and they commence copulating. After copulation, the female will depart. The mandrill mates throughout the year during the estrus cycle, which occurs once every 33 days.

The gestation (pregnancy) time for the mandrill is 6 to 7 months. Mandrill infants are born with their eyes open and with fur. They have a black coat and pink skin for the first two months. They cling to their mother's belly immediately and can support their own weight. Mothers form bonds with their children. These bonds last into adulthood with the daughters, while the bonds with the sons last only until his sexual maturity. These bonds entail the two sitting with each other and grooming each other.

Mandrills can survive up to 31 years in captivity. Females reach sexual maturity at about 3.5 years.