Macaque (pronounced /məˈkæk/) is the common name for any of the Old World monkeys comprising the genus Macaca (/məˈkækə/), typically characterized by the presence of cheek pouches to carry food, and ranging from slight to heavily built and colors from shades of brown to black. While many species are characterized by short tails or no tails, some species have very long tails.

Aside from humans (genus Homo), the macaques are the most widespread primate genus. Macaques are primarily found in Asia, from Afghanistan to China and Japan to Southeast Asia, including the Philippines and Borneo. One species is found in Northern Africa and Gibraltar.

The macaques include some of the best-known monkeys, such as the rhesus macaque or rhesus monkey (Macaca mulatta) and the Barbary macaque or Barbary ape (M. sylvanus). Although several species use "ape" in their common name, given their lack of tails, these are true monkeys, with no greater relationship to the true apes than any other Old World monkeys.

Occupying a wide geographic and ecologically diverse range, macaques provide important ecological roles, both as part of food chains and in seed dispersal. For humans, macaques, and in particular the rhesus monkeys and the crab-eating macaques, have been important animals for medical, psychological, and other scientific research, aided by having a similar genetic makeup and immunological, neurological, and reproductive systems as humans, and by their adapting well to captivity (Shidler 2007). In addition, macaques provide other values to humans, such as being trained to pick coconuts, or as popular sightings in the wild or in zoos, adding to the wonder of nature with their unique forms and behaviors. The Japanese macaques (Macaca fuscata) are particularly well-known, given their being seen sitting in hot springs in snow-covered areas in Japan (SDZ 2008). 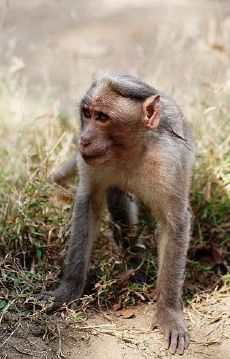 As a member of the Old World monkey family (Cercopithecidae), macaques are characterized by close-set nostrils that are downward or forward facing, a tubular ear bone, and a tail, when present, that is never prehensile (adapted for grasping or holding). Old World monkeys also are characterized by trichromatic vision (Carroll 2006) and the presence of twelve premolars, with four cups on their molars, in a "bilophodont" pattern, unlike apes, which have five cusps on their molars (the "Y-5" molar pattern). Catarrhines (Old World monkeys and apes) have the dental formula: 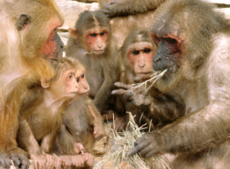 Some macaques are nearly tailless, such as the stump-tailed macaque (M. arctaides), some are tailless, such as the Barbary ape (M. sylvanus) and some have long tails, such as rhesus monkey (M. mulataa). The crab-eating macaque (Macaca fascicularis), also known as the cynomolgus monkey and long-tailed macaque, has a very long tail, which is longer than the body, with the body length of the adult monkey about 38 to 55 centimeters (15 to 22 inches) and the tail typically 40 to 65 centimeters (16 to 26 inches).

While most monkeys are terrestrial, macaques tend to be more terrestrial, like baboons (SDZ 2008), or terrestrial and arboreal. Macaques are native to the following 22 nations: Morocco, Algeria, Tunisia, Afghanistan, Pakistan, Bangladesh, India, Nepal, Sri Lanka, China, Japan, Philippines, Bhutan, Brunei, Thailand, Burma, Cambodia, Vietnam, Laos, Malaysia, Indonesia, and Taiwan (PIN 2008). According to Melnick et al. (1993), the rhesus monkey "has the widest geographic range of any nonhuman primate," occupying habitats from sea level to over 3000 meters and from semidesert shrub to moist temperate evergreen forests throughout Central, South, and Southeast Asia. The crab-eating Macaque has the next largest range among primate species, with the native range including most of mainland Southeast Asia, the Malay Archipelago islands of Sumatra, Java, and Borneo, the islands of the Philippines, and the Nicobar Islands, as well as being an introduced species in places as diverse as Hong Kong, western New Guinea, Palau, and Mauritius. The Barbary macaque (Macaca sylvanus) is found in the Atlas Mountains of Algeria, Morocco and Tunisia, with a small, possibly introduced, population in Gibraltar, making them the only primates other than humans living freely in Europe. 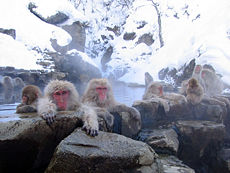 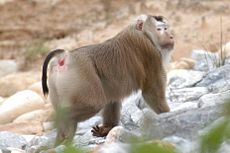 Species of monkeys are often undergoing revision, as subspecies may be raised to the level of species. References vary from 12 species of macaques and 46 subspecies (Shidler 2007) to more than 20 species (PIN 2008). The following are 22 macaque species that are commonly recognized today:

Macaques are similar in genetic makeup to humans and have similar immunological, neurological, and reproductive systems (Shidler 2007). Combined with the fact that some, such as the rhesus monkey and the crab-eating monkey, adapt well to captivity and are not endangered in the wild, they are popular animals for use in medical and scientific research (Shidler 2007). The rhesus monkey (Macaca mulatta), for example, is used in research projects involving understanding genetic and reproductive disorders, exploring age-related health conditions, and developing an AIDS vaccine (Shidler 2007). The cynomolgus monkey or crab-eating macaque (Macaca fascicularis) is best known for its use as the first test animal in clinical studies for development of the polio vaccine (Shidler 2007).

In the late 1990s, it was discovered that nearly all (around 90 percent) pet or captive macaques are carriers of the herpes-B virus. This virus is harmless to macaques, but infections of humans, while rare, are potentially fatal. A 2005 University of Toronto study showed that urban performing macaques also carried simian foamy virus, suggesting they could be involved in the species-to-species jump of similar retroviruses to humans (Hall 2005).

Retrieved from https://www.newworldencyclopedia.org/p/index.php?title=Macaque&oldid=983924
Categories:
Hidden category:
This page was last edited on 25 August 2014, at 21:46.
Content is available under Creative Commons Attribution/Share-Alike License; additional terms may apply. See Terms of Use for details.