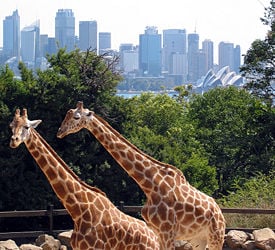 A zoological garden, zoological park, or zoo is a facility in which living animals are confined within enclosures and usually displayed to the public. Beyond recreation, other functions of zoos include research, education, and conservation (such as breeding endangered animals and sometimes reintroducing them into the wild). While some domesticated animals may be kept for display, the main focus is on wild animals.

Zoos trace to at least 4,000 years ago (Reichenbach 2002). Modern day zoos may be publicly or privately owned, with ownership including municipalities, zoological societies and other charitable or non-profit organizations, for-profit corporations, and individuals.

Human beings, which receive joy from observing nature and have a role as stewards of creation, have, in the ideal sense, a natural internal desire to look at, better understand, and protect nature. Zoos provide these basic functions (recreation, research, education, and conservation), and indeed, often allow humans access to animals that would be difficult to see in the wild. Unfortunately, historically there also have been unethical zoo operators, more concerned with exploiting this human nature for profit than in providing satisfactory conditions for the animals exhibited.

The term zoological garden refers to the biological discipline zoology, which derives from Greek Ζωο ("animal") and λογος ("study"). The term was first used in 1828 for the London Zoological Gardens, soon abbreviated to "zoo." 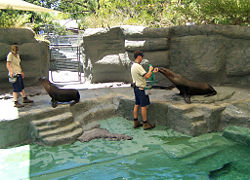 Sea lions at the Melbourne Zoo.

Zoos have been known for thousands of years, with well-known collections of animals in ancient Egypt, China, and Rome. An early formulation of a zoo was the menagerie, which has a long history from the Middle Ages to modern times. Menagerie is the term for a historical form of keeping wild and exotic animals in human captivity. The term was foremost used in seventeenth century France, originally for the management of the household or domestic stock, but later primarily for an aristocratic or royal animal collection. The French-language "Methodical Encyclopaedia" of 1782 defines a menagerie as an "establishment of luxury and curiosity." Later on the term was referred even to traveling animal collections that exhibited wild animals at fairs across Europe and the Americas.

The success of London Zoo set off a wave of similar establishments. The first zoological garden established in Australia was Melbourne Zoo in 1860. In the same year the first zoo of the United States opened to the public in New York City (Central Park Zoo), although earlier, in 1859, the Philadelphia Zoological Society had made an effort to establish a zoological park, but delayed due to the American Civil War. The Philadelphia Zoo, sometimes referred to as America's first Zoo, opened in 1874 with research considered its legitimate objective (Kawata 2002).

When ecology emerged as a matter of public interest through the 1970s, a few zoos began to consider making conservation their central role, with Gerald Durrell of the Jersey Zoo, George Rabb of Brookfield Zoo, and William Conway of the Bronx Zoo (Wildlife Conservation Society) leading the discussion. Since then, zoo professionals became increasingly aware of the need to engage themselves in conservation programmes and the American Zoo Association soon asserted that conservation had become its highest priority (Kisling 2001; Hoage and Deiss 1996; Hanson 2002; Hancocks 2001). 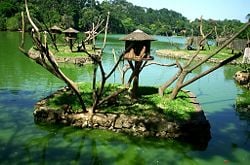 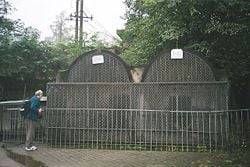 Today, many zoos in Europe and North America keep animals in enclosures that attempt to replicate their natural habitats, for the benefit of both resident animals and visitors. They may have special buildings for nocturnal animals, with dim lighting during the day, so the animals will be active when visitors are there, and brighter lights at night to ensure that they sleep. Special climate conditions are created for animals living in radical environments, such as penguins. Special enclosures for birds, insects, fishes, and other aquatic life forms have also been developed.

A petting zoo (also called children's farms or children's zoos) features a combination of domestic animals and some wild species that are docile enough to touch and feed. Petting zoos are popular with small children. To ensure the animals' health, the food is supplied by the zoo, either from vending machines or a kiosk nearby. There are independent and zoo-based petting zoos.

Some zoos have walk-through exhibits where visitors enter enclosures of non-aggressive species, such as lemurs, marmosets, birds, lizards, turtles, and so forth. Visitors are asked to keep to paths and avoid showing or eating foods that the animals might snatch. The animals are not tame.

There are four main functions of modern zoos: recreation or diversion, conservation, education, and research.

Although the traditional function of zoos was recreation, most modern zoos in Europe and North America display wild animals primarily for the conservation of endangered species and for educational and research purposes, and secondarily for the entertainment of visitors (Tudge 1991; Regan 2004).

Regulation of zoos in the United States

In the United States, any public animal exhibit must be licensed and inspected by the United States Department of Agriculture (APHIS 2004). Zoos may also require special licenses to meet the requirements of their particular locality. For a variety of reasons, such as zoonotic disease, possession of controlled drugs for veterinary use, and so forth, a zoo in the United States may be inspected and regulated by other agencies including the Food and Drug Administration, Environmental Protection Agency, Drug Enforcement Agency, Occupational Safety and Health Administration, and others.

Depending on the animals they exhibit, the activities of zoos are regulated by laws including the Endangered Species Act, the Animal Welfare Act, the Migratory Bird Treaty Act of 1918, and other laws (Grech 2004).

Additionally, zoos in North America may choose to pursue accreditation by the Association of Zoos and Aquariums. To achieve accreditation, a Zoo must pass a rigorous application and inspection process and meet or exceed the AZA's standards for animal health and welfare, fundraising, zoo staffing, and involvement in global conservation efforts. Inspection is performed by three experts (typically one veterinarian, one expert in animal care, and one expert in zoo management and operations) and then reviewed by a panel of twelve experts before accreditation is awarded. This accreditation process is repeated once every five years.

The AZA estimates that there are approximately 2,400 animal exhibits operating under USDA license as of February 2007; fewer than 10 percent have achieved accreditation (AZA 2007) 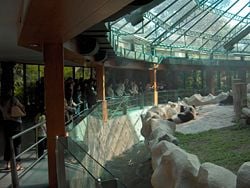 Some zoos concentrate on animals of geographical regions, on animals of aquatic ecosystems, or attempt to exhibit their animals in a different ways, such as safari parks or open-range. Some of these institutions, mainly those who evolved from former amusement parks, connect entertainment elements with exhibiting live animals.

Wild animal parks are larger than the classical zoo. The first of this new kind of animal park was Whipsnade Park which opened in 1931 in Bedfordshire, England. This park, owned by the Zoological Society of London, covers 600 acres (2.4 km²) and is still one of Europe's largest wildlife conservation parks, where animals are kept within sizable enclosures. Since the early 1970s a 1,800-acre parcel (7 km²) in the Pasqual Valley near San Diego also accommodates a remarkable zoo, the San Diego Wild Animal Park that is run by the Zoological Society of San Diego. Another zoo comparable to these wild animal parks is the Werribee Open Range Zoo in Melbourne, Australia, focusing on displaying animals living in a wide open savanna. This 500-acre zoo is managed by the Zoological Parks and Gardens Board which also manages Melbourne Zoo. One of only two American state supported zoo parks is the 535-acre North Carolina Zoo located in Asheboro, North Carolina.

An animal theme park is a combination of an amusement park and a zoo, mainly for entertaining and commercial purposes. Marine mammal parks such as Sea World are more elaborate dolphinariums keeping whale species and containing additional entertainment attractions. Another kind of animal theme park opened in 1998—Disney's Animal Kingdom in Orlando, Florida. This commercial park established by the Walt Disney Company is similar to wild animal parks according to size (550 acres, 2 km²), but differs in intention and appearance since it contains more entertainment and amusement elements than the classical zoo, such as a stage shows, roller coasters, and mythical creatures. Another famous one is the Marineland in Niagara Falls, Ontario, Canada. 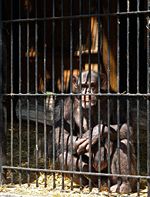 There are a diversity of animal rights concerns regarding zoos. Most fundamental are those activists that philosophically disapprove of zoos because they interpret zoos as human domination over equal creatures. Others criticize their educational value as being superficial and useless. Some animal welfare groups, however, do not fundamentally reject the existence of zoological gardens, but seek to remedy the unnatural and unhealthy conditions in which many captive animals live—particularly the problem of small cages lacking environmental enrichment. Some zoos continue to provide their animals inadequate care, particularly those zoos that are unlicensed, those that are overly commercially-concerned, and those that suffer from lack of money. Stereotypical behavioral patterns such as pacing, rocking, and swaying may indicate stress or suffering of animals in unsuitable enclosures. For example, unhealthy elephants may sway continuously from side to side or rock back and forth.

People for the Ethical Treatment of Animals (PETA) rejects the claim that the purpose of most zoos is to undertake research, to aid in conservation, or to educate. PETA alleges that most zoo research is in fact geared toward finding new ways to breed and keep animals in captivity, so that if zoos ceased to exist so would the need for most of their research. PETA writes that zoos usually favor exotic or popular animals over threatened or endangered local wildlife, in order to draw crowds (PETA 2007).

The majority of the large non-profit and scientifically oriented institutions are working to improve their animal enclosures, although constraints like size and expense make it difficult to create ideal captive environments for some species (for example, dolphins and other whales) (Norton et al. 1995; Malmud 1998).