The IUCN Red List of Threatened Species™ is an extensive inventory of the conservation status of plant and animal species worldwide, with a standardized set of criteria to evaluation their extinction rate. Also known as the IUCN Red List or Red Data List, this inventory is produced by the Species Survival Commission (SSC) of the International Union for the Conservation of Nature and Natural Resources.

The current nine categories by which the extinction risk for a species is evaluated in the IUCN Red List are Extinct, Extinct in the Wild, Critically Endangered, Vulnerable, Near Threatened, Least Concern, Data Deficient, and Not Evaluated. These present categories, and precise criteria to determine the extinction threat status for a species, were adopted in 1994.

The IUCN Red List was first conceived of in 1963, when standards were set for species listing and conservation assessment efforts. In 1988, all bird species were evaluated, and the 1996 IUCN Red List of Threatened Animals included the conservation status of all known mammal species. In 2000, the Red List made a single list for the first time of animal and plant assessments, with 18,000 species assessments. The 2008 Red List has over 40,000 species listings. Now too large to be easily published as a book, the IUCN Red List is made available online, on a searchable directory.

For people to properly fulfill a role as stewards of nature, they need assessment tools that allow them to understand the current status of various species, the trends in the health of their populations, and the impacts of anthropogenic factors. Habitat degradation and fragmentation, pollution, and invasive species are among the direct human impacts on species population levels. The IUCN Red List, which reflects a growing international awareness and cooperation, provides a comprehensive tool for governments, media, NGOs, intergovernmental bodies, and so forth to gain access to important information on biodiversity when environment-related decisions are to be made. 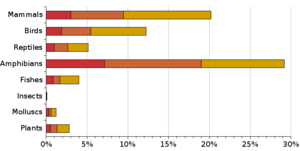 The percentage of species in several groups which are listed as critical    , endangered    , or vulnerable     on the 2007 IUCN Red List.

The IUCN Red List is created under the auspices of the International Union for the Conservation of Nature and Natural Resources (IUCN), a global environmental organization whose membership consists of governments, intergovernmental bodies, and international and national NGOs. The IUCN, which is headquartered in Gland, Switzerland, but has offices in more than 60 nations, is considered the world's main authority on the conservation status of species (Mrosovsky 1997).

The IUCN Red List is considered the world's most comprehensive inventory of the global conservation status of plant and animal species (IUCN 2008a). It presents various categories regarding the extinction status or risk and evaluates them according to a set of quantitative criteria based on biological factors related to extinction risk, such as population size, rate of decline, and so forth. These criteria are considered to be relevant to all species and all regions of the world. A series of Regional Red Lists are produced by countries or organizations, which assess the risk of extinction to species within a political management unit.

IUCN Red List is widely considered to be the most objective and authoritative system for classifying species in terms of the risk of extinction (BI 2008).

Major species assessors include BirdLife International, the Institute of Zoology (the research division of the Zoological Society of London), the World Conservation Monitoring Centre, and many Specialist Groups within the IUCN's Species Survival Commission (SSC). Collectively, assessments by these organizations and groups account for nearly half the species on the Red List. BirdLife International is considered the Red List Authority (RLA) for birds (IUCN 2008a).

The IUCN aims to have the category of every species re-evaluated every five years if possible, or at least every ten years. This is done in a peer reviewed manner through IUCN Species Survival Commission (SSC) Specialist Groups, which are Red List Authorities responsible for a species, group of species or specific geographic area, or in the case of BirdLife International, an entire class (Aves).

Species in the IUCN Red List are classified in nine groups:

When discussing the IUCN Red List, the official terminology threatened, or species threatened with extinction, is a grouping of three categories: Critically Endangered, Endangered, and Vulnerable. These are evaluated according to five biological factors, including area of geographic distribution, population size, rate of decline, and degree of population and distribution fragmentation (IUCN 2008a).

1994 IUCN Red List categories (version 2.3), used for species which have not been reassessed since 2001.

The present categories and criteria were adopted by the IUCN in 1994, after evolving over time through consultation and testing. The older 1994 IUCN Red List had only a single "Lower Risk" category, which contained three subcategories:

Conservation Dependent referred to a taxon that is not severely threatened, but the taxon must depend on conservation programs. Examples include spotted hyena, leopard shark, black caiman.

Near Threatened and Least Concern have now become their own categories, while Conservation Dependent is no longer used and has been merged into Near Threatened.

From the species evaluated as a whole, 16,118 were considered threatened. Of these, 7,725 were animals, 8,390 were plants, and three were lichen and mushrooms.

This release listed 784 species extinctions recorded since 1500 C.E., unchanged from the 2004 release. This was an increase of 18 from the 766 listed as of 2000.. Each year a small number of "extinct" species may be rediscovered, becoming Lazarus species, or may be reclassified as "data deficient." In 2002, the extinction list dropped to 759 species, but has been rising ever since.

On September 12, 2007, the IUCN released the 2007 IUCN Red List of Threatened Species, the latest update to their online database of species' extinction risks. In this release, they have raised their classification of both the Western lowland gorilla (Gorilla gorilla gorilla) and the cross river gorilla (Gorilla gorilla diehli) from Endangered to Critically Endangered, which is the last category before Extinct in the Wild, due to Ebola virus and poaching, along with other factors. Russ Mittermeier, chief of Swiss-based IUCN's Primate Specialist Group, stated that 16,306 species are endangered with extinction, 188 more than in 2006, with a total of 41,415 species on the Red List. The Red List includes the Sumatran orangutan (Pongo abelii) in the Critically Endangered category and the Bornean orangutan (Pongo pygmaeus) in the Endangered category (IUCN 2007).

The 2008 Red List was released on October 6, 2008, at the IUCN World Conservation Congress in Barcelona, Spain, and "has confirmed an extinction crisis, with almost one in four [mammals] at risk of disappearing forever" (IUCN 2008b). The study shows at least 1,141 of the 5,487 mammals on Earth are known to be threatened with extinction, and 836 are listed as Data Deficient (IUCN 2008b).

The IUCN Red List has come under criticism on the grounds of secrecy (or at least poor documentation) surrounding the sources of data (Mrosovsky 1997). The allegations have led to efforts by the IUCN to improve its documentation and data quality, and to include peer reviews of taxa on the Red List. The list is also open to petitions against its classifications, on the basis of documentation or criteria.

It has been suggested that the IUCN Red List and similar works are prone to misuse by governments and other groups to draw possibly inappropriate conclusions on the state of the environment or to affect exploitation of natural resources (Possingham et al. 2002).