Wolverine is the common name for a solitary, carnivorous mammal, Gulo gulo, of the weasel family (Mustelidae), characterized by a large and stocky body, a bushy tail, dark fur, short legs, and broad, webbed feet with long, sharp claws on the front feet and furry soles. The wolverine is the only extant member of the genus Gulo (meaning "glutton"). Other common names include glutton, carajou, and skunk bear.

The wolverine is the largest land-dwelling species of the Mustelidae family, a taxon that also includes ferrets, martens, weasels, badgers, skunks, and otters. (The semi-aquatic giant otter of South America is the largest member of the family.). Wolverines are found in the northern part of North America and Asia (Grzimek et al. 2004).

Wolverines are an important part of food chains in northern climates. For humans, the wolverine's long, coarse fur, with its ability to shed moisture, making it frost resistant, is prized as a trim hoods and a lining for parkas. Their reputation as fearless predators that will attack most animals, even much larger ones, such as moose and caribou, has made them a well-known animal, adding to the wonder of nature. 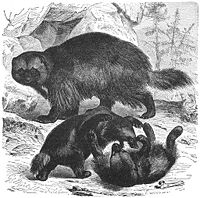 Anatomically, the wolverine is a stocky and muscular animal. The adult wolverine is about the size of a medium dog, with a length usually ranging from 65 to 87 centimeters (25 to 34 inches), a tail of 17 to 26 cm (seven to ten inches), and weight of ten to 30 kilograms (22 to 65 pounds) (Grzimek et al. 2004). Males are as much as 30 percent larger than the females.

The wolverine has glossy dark fur, usually of dark brown hair, and it has stripes of dull yellow along the sides. Its fur is long and dense and does not retain much water, making it very resistant to frost, which is common in the wolverine's cold habitat.

Wolverines, as other mustelids, possess a special upper molar in the back of the mouth that is rotated 90 degrees, or sideways. This special characteristic allows wolverines to tear off meat from prey or carrion that has been frozen solid and also to crush bones, which enables the wolverine to extract marrow (Pratt; Taylor and Gordon 1994). 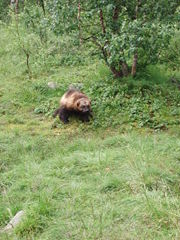 Wolverine at the Polar Zoo, Norway

Wolverines are solitary carnivores, that both hunt prey and are scavengers of large animals that may have been killed by wolves. Their prey includes small mammals (mice, lemmings) and birds, as well as large ungulates, such as moose, caribou, deer, and reindeer. In the later case, these generally are young animals or large animals that are weakened by disease or the winter conditions or exhausted in the snow. Wolverines also may kill other carnivores, such as lynx (Grzimek et al. 2004). Wolverines also are known on occasion to eat plant material (Rickert 2007).

Armed with powerful jaws and a thick hide, wolverines may defend kills against larger or more numerous predators. There is at least one published account of a 27-pound wolverine's attempt to steal a kill from a much larger predator—namely, a black bear (adult males weigh 400 to 500 pounds). Unfortunately for the mustelid, the bear won what was ultimately a fatal contest, crushing the wolverine's skull (Gugliotta 2003; SD 2003).

Wolverines do not hibernate. They live in burrows or dens.

Wolverines are solitary except to mate. Mating season is in the summer, but the actual implantation of the embryo (blastocyst) in the uterus is delayed until early winter, leading to a long gestation and delay in the development of the fetus. Females will often not produce young if food is scarce. Litters of typically two or three young ("kits") are born in the spring. Kits develop rapidly, reaching adult size within the first year of a lifespan that may reach anywhere from five to more than ten years, even reaching sixteen years in captivity (Grzimek et al. 2004).

Adult wolverines have no natural predators, save man, though they do come into conflict with (and may be killed by) other large predators, such as wolves, over territory and food. Juveniles are of course more vulnerable; infants (kits) have been known on occasion to be taken by predatory birds such as eagles (Banci 2001).

The wolverine lives primarily in isolated northern areas, for example the arctic and alpine regions of Alaska, northern Canada, Siberia, and Scandinavia; they are also native to Russia and the Baltic countries. The wolverine is found as far south as the Sierra Nevada in California and a few remain in the Rocky Mountains and northern Cascades of the United States (Rickert 2007).

The world's total wolverine population is unknown. The animal exhibits a low population density and requires a very large home range (Hurowitz 2008). The range of a male wolverine can be more than 620 km² (240 sq mi) while encompassing the ranges of several females (with smaller home ranges of roughly 130-260 km² (50-100 sq mi). Adult wolverines try for the most part to keep non-overlapping ranges with adults of the same sex (Taylor 1994). Radio tracking suggests an animal can range hundreds of miles in only a few months.

This requirement for large territories brings wolverines into conflict with human development, and hunting and trapping further reduce their numbers, causing them to disappear from large parts of their former range; attempts to have them declared an endangered species have met with little success (Hurowitz 2008).

The wolverine has been hunted for its fur. Given that this long and dense fur does not retain water, making it resistant to frost, it has been traditionally popular among hunters, trappers and the Eskimos as a lining in jackets and parkas and trim for hoods, especially for wear in Arctic conditions.

The wolverine figures prominently in the mythology of the Innu people of eastern Québec and Labrador. In at least one Innu myth, it is the creator of the world (Armitage 1992).

The wolverine's (questionable) reputation as an insatiable glutton may be in part due to a false etymology. The animal's name in old Swedish, Fjellfräs, meaning "fell (mountain) cat," worked its way into German as Vielfraß, which means roughly "devours much." Its name in other West Germanic languages is similar (e.g. Dutch Veelvraat). The name in Old Norse, Jarfr, lives on in the regular Norwegian name jerv, regular Swedish name järv and regular Danish name jærv.

Retrieved from https://www.newworldencyclopedia.org/p/index.php?title=Wolverine&oldid=744924
Categories:
Hidden category:
This page was last edited on 26 June 2008, at 04:22.
Content is available under Creative Commons Attribution/Share-Alike License; additional terms may apply. See Terms of Use for details.