Lynx (plural lynxes or lynx) is both the common and scientific name for a taxon of medium-sized wild cats of North America, Europe, and Asia, characterized by tufted ears, long legs, short tails, large paws, and short heads. Part of the cat family Felidae, the taxonomic group Lynx generally is placed at the genus level; however, some authorities place this taxon as a subgenus within the genus Felis.

As apex predators at the top of food chains, Lynx exhibit bi-level functionality in the way they play an important role in keeping prey populations (rabbits, hares, deer, and so on) under control, thus aiding the balance of nature, while they also are securing the nutrition to assure their own maintenance, growth, and reproduction. For humans, lynx have historically served as a source of fur, while also adding to the wonder of nature.

Lynx are part of the Felidae family, which belongs to the Carnivora order within the mammals (class Mammalia). Members of the family are called cats and sometimes felines. Cats are more strictly carnivorous (meat eating) than most other members of Carnivora (carnivores). The teeth of cats are well suited to their diet, with long canines for gripping prey and blade-like molars for cutting flesh (Voelker 1986).

All cats walk on four feet, in a digitigrade manner—that is on their toes. Their hind legs are longer and stronger than their fore legs, which gives them strength for sprinting and leaping, but not stamina for long distance running. Cats have claws on their feet that are used for gripping prey, for fighting, and for climbing. In the lynx, as with most cats, the claws can be retracted into the toes, which helps keep them sharp. The bodies of all cats (except some breeds of domestic cat) are covered with thick fur. In most species this is spotted or striped.

Felidae usually is divided into two subfamilies, Pantherinae (which includes "big cats" like lions, jaguars, tigers, and leopards) and Felinae (which includes the "small cats," although some can be large, like the cougar). Lynx are part of the Felinae subfamily. 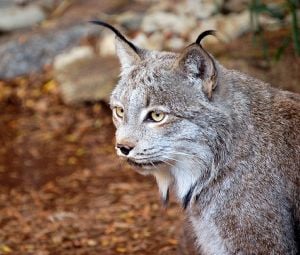 A Canadian lynx from the Philadelphia Zoo with distinct lynx tip and ruff with black bars.

All lynx have short tails and characteristic tufts of black hair on the tip of the ears. They have a ruff under the neck, which has black bars (not very visible), resembling a bow tie. They have large paws padded for walking on snow and long whiskers on the face. The body color varies from light brown to gray; and occasionally, is marked with dark brown spots, especially on the limbs. They range up to about 30 kilograms (66 pounds) in weight. The Eurasian lynx is significantly larger than the other species, while the Iberian lynx is significantly smaller.

The Canadian lynx (Lynx canadensis) and the bobcat (Lynx rufus) are both found in North America. They differ in body proportions and markings, but are both in about the same size range. The bobcat has shorter legs, smaller paws, shorter ear tufts, and more spotted coat (pelage), with only the top of the tip of the tail black, versus the black-tipped tail of the Canadian lynx (FWS 2000). The paws of the bobcat have one half of the surface area of the Canadian lynx. The Canadian lynx (also known as the Canada lynx and North American lynx) has hind legs that are longer than the front legs (FWS 2000), as with the bobcat. Adult males of Lynx canadensis average ten kilograms (22 pounds) in weight and 85 centimeters (33.5 inches) in length from head to tail, while females average 8.5 kilograms (19 pounds) and 82 centimeters (32 inches) (FWS 2000). Male bobcats average about 7 to 14 kilograms (16 to 30 pounds) and females about nine kilograms (20 pounds).

The lynx inhabits the high altitude forests with dense cover of shrubs, reeds, and grass. Although the lynx is largely terrestrial and hunts on the ground, it can climb trees, and it also swims, catching fish. Even though lynx are found in the northern regions of Scandinavia and even in Spain, they primarily are found in North America and also in pockets in the Himalayas.

Lynx is more common in northern Europe—especially in Estonia, Finland, and the northern parts of Russia. Since the beginning of the twentieth century, the Eurasian lynx (Lynx lynx) was considered extinct in the wild in Slovenia and Croatia. A resettlement project (begun in 1973) has successfully re-introduced the lynx to the Slovenian Alps and the Croatian regions of Gorski Kotar and Velebit, including Croatia's Plitvice Lakes National Park and Risnjak National Park. In both countries, the lynx is listed as an endangered species and protected by law. Lynx-spotting can be arranged in cooperation with the Risnjak National Park. Several lynx-resettlement projects begun in the 1970s have been successful in various regions of Switzerland. Since the 1990s, there have been numerous efforts to resettle the Eurasian lynx in Germany. The lynx is found in the Białowieża Forest in northeastern Poland.

The Canadian lynx or North American lynx (Lynx canadensis) is found in northern North America, from the northern parts of Canada to the northernmost United States, primarily in coniferous forests. Its large feet make it highly adapted to deep snow, and it is common in areas that receive deep snow (FWS 2000). Its range includes Alaska and that part of Canada from the Yukon and Northwest Territories east to New Brunswick and Nova Scotia (FWS 2002). Its distribution in the contiguous United States historically has included the Cascades Range of Washington and Oregon, the Rocky Mountain Range, the Western Great Lakes area, and northeastern United States from Maine to New York (FWS 2000). In the contiguous United States, its distribution is associated with the southern boreal forest, while in Canada and Alaska, lynx inhabit the classic boreal forest ecosystem known as taiga.

In recent years, a few Canadian lynx sightings were reported as far south as the southern Appalachian Mountains of western North Carolina, specifically in the area from Mount Mitchell across to the Shope Creek Forest area (part of Pisgah National Forrest). United States Fish and Wildlife Service officials question the reliability of such reported sightings as evidence of wild-living lynx in the area. Rather, they have said that if the reported lynx sightings are bona fide, they were most likely sightings of illegally-held pets that had been released or had escaped.

The bobcat (Lynx rufus) is found in North America, from southern Canada to central Mexico. 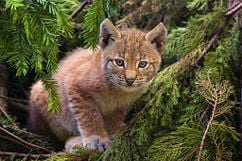 General behavioral traits of lynx resemble those of the leopard. Lynx are usually solitary, although a small group of them may travel and hunt together. Mating takes place in the late winter and they give birth to two to four kittens once a year. The young stay with the mother for one more winter, and then the young adults can live on their own. Lynx will have their dens in crevices or under ledges. They feed on a wide range of animals from those as large as reindeer, roe deer, small red deer, and chamois, to smaller, more usual prey: birds (including poultry) and small and medium-sized mammals, like snowshoe hares, fish, sheep, and goats.

Spotting a lynx is a very rare event in and of itself, due to the extremely shy and solitary nature of the animal, and their typically nocturnal habit. It is a secretive cat that usually avoids people. Lynx have very rarely been reported to attack humans; and in those cases, they are almost exclusively acting in self-defense.

Hunting lynxes is illegal in many countries. The Iberian lynx is critically endangered with extinction and the killing of any individuals has been outlawed since the 1970s in Spain and Portugal (Ward 2004). In 2000, the U.S. Fish and Wildlife Service designated the Canadian lynx a Threatened species in the contiguous (lower) 48 states (FWS 2000).