Lyric poetry refers to either poetry that has the form and musical quality of a song, or a usually short poem that expresses personal feelings, which may or may not be set to music.[1] Aristotle, in Poetics, contrasted lyric poetry with drama and epic poetry. An example would be a poem that expresses feelings and may be a song that could be performed to an audience.

The lyric was originally verse to accompany the lyre. In Ancient Greece it was associated with the Apollonian element, as opposed to the revelry of the Dionysian.

Although arguably the most popular form of lyric poetry in the Western tradition is the 14-line sonnet, either in its Petrarchan or its Shakespearean form, lyric poetry appears in a variety of forms. Ballades and villanelles are other forms of the lyric.[2]

Ancient Hebrew poetry relied on repetition, alliteration, and chiasmus for many of its effects. Although much Greek and Roman classical poetry was written in forms with set meters and strophes, Pindar's odes seem as formless to the ear accustomed to rhyme and meter as such modern poetry as Rainer Maria Rilke's Duino Elegies.

In some cases, the form and theme are wed, as in the courtly love aubade or dawn song in which lovers are forced to part after a night of love, often with the watchman's refrain telling them it is time to go.

A common feature of lyric forms is the refrain, whether just one line or several, that ends or follows each strophe. The refrain is repeated throughout the poem, either exactly or with slight variation.

Much lyric poetry depends on regular meter based either on number of syllables or on stress. The most common meters are:

Some forms have a combination of meters, often using a different meter for the refrain. 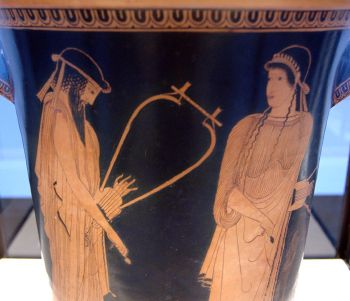 Lyric poetry for the ancient Greeks had a precise and technical meaning: verse that was accompanied by the lyre. The lyric poet was classified as distinct from the writer of plays (which were spoken rather than sung), the writer of trochaic and iambic verses (which were recited), from the writer of elegies (which were accompanied by the flute, rather than the lyre) and the writer of epics.[3] The scholars of Hellenistic Alexandria identified nine lyric poets worthy of critical study. These archaic Greek musician-poets included Sappho, Pindar, Anacreon and Alcaeus. The metrical forms characteristic of ancient Greek sung verse are strophes, antistrophes and epodes.[4] The Roman poet Catullus was influenced by Sappho as well as the Neoteric poets who had turned away from epic poetry to more personal themes. Horace was another notable Roman poet.

In China, an anthology of poems by Qu Yuan and Song Yu, Songs of Chu, defined a new form of poetry that came from the area of Chu during the Warring States period. As a new literary style, chu ci abandoned the classic four-character verses used in poems of Shi Jing and adopted verses with varying lengths. This gave it more rhythm and latitude in expression.

Originating in tenth century Persian, a ghazal is a poetic form consisting of couplets which share a rhyme and a refrain. Formally it consists of a short lyric composed in a single meter with a single rhyme throughout. The central subject is love. Notable exponents include: Hafez, Amir Khusro, Auhadi of Maragheh, Alisher Navoi, Obeid e zakani, Khaqani Shirvani, Anvari, Farid al-Din Attar, Omar Khayyam, and Rudaki.

Lyric in European literature of the medieval or Renaissance period means simply a poem which has been written to be set to music. A poem's particular structure, function or theme is not specified by the term.[5] The lyric poetry of Europe in this period was created largely without reference to the classical past, by the pioneers of courtly poetry and courtly love.[6] The troubadours, traveling composers and performers of songs, began to flourish during the eleventh century and were often imitated in the thirteenth. Trouvères were poet-composers who were roughly contemporary with and influenced by the troubadours but who composed their works in the northern dialects of France. The first known trouvère was Chrétien de Troyes (fl. 1160s-1180s). The dominant form of German lyric poetry in the period was the Minnesang, "a love lyric based essentially on a fictitious relationship between a knight and his high-born lady."[7] Initially imitating the lyrics of the French troubadours and trouvères, Minnesang soon established a distinctive tradition.[8]

A bhajan or kirtan is a Hindu devotional song. Bhajans are often simple songs in lyrical language expressing emotions of love for the Divine. Notable proponents include: Kabir, Surdas and Tulsidas.

Chinese Sanqu poetry was a Chinese poetic genre from the Jin Dynasty, 1115–1234, through the Yuan Dynasty, (1271-1368), to the following Ming period. Playwrights like Ma Zhiyuan (c. 2170-1330) and Guan Hanqing (c. 1300) were well-established writers of Sanqu Dramatic Lyrics. This poetry was composed in the vernacular or semi-vernacular.

In Italy, Petrarch developed the sonnet form inherited from Giacomo da Lentini and which Dante had widely used in his Vita Nova. In 1327, the sight of a woman called Laura in the church of Sainte-Claire d'Avignon awoke in him a lasting passion, celebrated in the Rime sparse ("Scattered rhymes"). Later, Renaissance poets who copied Petrarch's style named this collection of 366 poems Il Canzoniere ("Song Book"). The realistic presentation of Laura in his poems contrasts with the clichés of troubadours and courtly love.

In France, La Pléiade aimed to break with earlier traditions of French poetry (especially Marot and the grands rhétoriqueurs), and, maintaining that French (like the Tuscan of Petrarch and Dante) was a worthy language for literary expression, to attempt to ennoble the French language by imitating the Ancients. Among the models favored by the Pléiade were Pindar, Anacreon, Alcaeus, Horace and Ovid. The forms that dominate the poetic production of these poets are the Petrarchan sonnet cycle and the Horatian/Anacreontic ode. The group included: Pierre de Ronsard, Joachim du Bellay and Jean-Antoine de Baïf.

A German lyric poet of the period is Martin Opitz. Matsuo Bashō is a Japanese lyric poet.

In the eighteenth century lyric poetry declined in England and France. The atmosphere of the English coffee-house or French salon, where literature was discussed, was not congenial to lyric poetry.[10] Exceptions include the lyrics of Robert Burns, William Cowper, Thomas Gray, and Oliver Goldsmith. 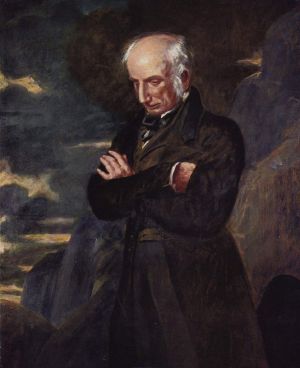 In Europe the lyric emerges as the principal poetic form of the nineteenth century, and comes to be seen as synonymous with poetry itself.[11] Romantic lyric poetry consists of first-person accounts of the thoughts and feelings of a specific moment; feelings are extreme, but personal.[12]

The traditional form of the sonnet is revived in Britain, with William Wordsworth writing more sonnets than any other British poet.[11] Other important Romantic lyric writers of the period include Samuel Taylor Coleridge, John Keats and Lord Byron. Later in the century the Victorian lyric is more linguistically self-conscious and defensive than the Romantic lyric.[13] Victorian lyric poets include Alfred Lord Tennyson and Christina Rossetti.

Lyric poetry was popular with the German reading public between 1830 and 1890, as shown in the number of poetry anthologies published in the period.[14] According to Georg Lukacs, the verse of Joseph von Eichendorff exemplifies the German Romantic revival of the folk-song tradition, initiated by Johann Wolfgang von Goethe and Johann Gottfried Herder and receiving new impetus with the publication of Achim von Arnim and Clemens Brentano's collection of Folk Songs, Des Knaben Wunderhorn..[15]

The nineteenth century in France sees a confident recovery of the lyric voice after its relative demise in the eighteenth century.[16] The lyric becomes the dominant mode in French poetry of this period.[17] Charles Baudelaire is, for Walter Benjamin, the last European example of lyric poetry "successful on a mass scale."[18]

In the early years of the twentieth century rhymed lyric poetry, usually expressing the feelings of the poet, was the dominant poetic form in America,[21] Europe and the British colonies. The English Georgian poets such as A. E. Housman, Walter de la Mare and Edmund Blunden used the lyric form. The Bengali poet Rabindranath Tagore was praised by William Butler Yeats for his lyric poetry and compared with the troubadour poets, when the two met in 1912.[22]

The relevance and acceptability of the lyric in the modern age was called into question by modernism, the growing mechanization of human experience and the harsh realities of war. After the Second World War the form was again championed by the New Criticism, and in the late twentieth century lyric once again became a mainstream poetic form.

The dominance of lyric was challenged by American experimental modernists such as Ezra Pound, T. S. Eliot, H.D. and William Carlos Williams, who rejected the English lyric form of the nineteenth century, feeling that it relied too heavily on melodious language, rather than complexity of thought.[23] Wallace Stevens and Hart Crane, however, were modernists who also worked within the tradition of post-Romantic lyric poetry.

Defenders of lyric poetry in the early twentieth century saw it as an ally in the fight against mechanization, standardization and the commodification of human activities.[24] The poetry of Guillaume Apollinaire represents an alternative view, that mechanization could extend the repertoire of lyric poetry.[24]

The tension between the traditional subjects of lyric poetry and the horrors of war are expressed in the War Poetry of Wilfred Owen, Siegfried Sassoon and Ivor Gurney. Owen’s poem "Strange Meeting" has been described as “a dream of a conversation with a dead lyric poet, or possibly even dead lyric itself.”[25] The Irish poet William Butler Yeats's work up to 1917 is predominantly dramatic and lyric love poetry, but after the First World War he explores the political subjects of Irish independence, nationalism and civil war.[26]

The American New Criticism returned to the lyric in the 1950s, advocating a poetry that made conventional use of rhyme, meter and stanzas, and was modestly personal in the lyric tradition.[27] Lyric poets consistent with the New Criticism ethos include Robert Frost and Robert Lowell.[28] In the 1950s long personal epics, such as Allen Ginsberg's Howl were a reaction against the well-wrought short lyric of the New Criticism.[29]

Lyric poetry dealing with relationships, sex and domestic life constituted the new mainstream of American poetry in the late twentieth century, influenced by the confessional poets of the 1950s and 1960s, such as Sylvia Plath and Anne Sexton.[30]