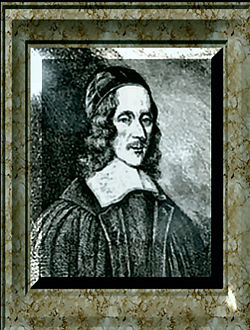 George Herbert (April 3, 1593 – March 1, 1633) was an English poet, orator and a priest in the Church of England. The poems of his final years, written while a clergyman at Bemerton near Salisbury, have been said to resemble nothing else in literature. They combine a profound spirituality with a restless experimentation and their language remains fresh and inspiring, even today. Herbert balanced a secular career with a life of theological contemplation, and the delicate balance (and occasional struggle) of such a life is reflected in the poetry he produced during a short life in which he held positions successively at Cambridge University, in the British Parliament, and his last three years in service of the Anglican Church. His mastery of just the right details in just the right order has made him, after centuries of neglect, one of the most beloved poets of the seventeenth century.

Herbert was born in 1593, the son of Sir Richard and Magdalen Herbert. Herbert's family was wealthy, eminent, intellectual and members of the noble class. Herbert's family was deeply involved in the currents of English literature and poetry, and often had prominent poets as guests at their estate. Herbert's mother, in particular, was a patron and friend of John Donne and the metaphysical poets. His older brother Edward, later Lord Herbert of Cherbury, was an important poet and philosopher, often referred to as "the father of English deism."

Herbert first distinguished himself in 1610 at the age of seventeen when, as a New Year's present to his mother, he sent her a pair of sonnets (titled, simply, “A Sonnet”) describing how the love directed towards God was more fulfilling than love directed towards a woman. These juvenile poems are notable for their content, which foreshadows the devotional poetry of Herbert's maturity, as well as for their form, modeled after the poetry of Donne with its combination of exaggerated metaphors expressed in ordinary language. The sonnets are brief enough that they can be quoted in full:

My God, where is that ancient heat towards thee,
Wherewith whole shoals of martyrs once did burn,
Besides their other flames? Doth poetry
Wear Venus' livery? only serve her turn?
Why are not sonnets made of thee? and lays
Upon thine altar burnt? Cannot thy love
Heighten a spirit to sound out thy praise
As well as any she? Cannot thy Dove
Outstrip their Cupid easily in flight?
Or, since thy ways are deep, and still the fame,
Will not a verse run smooth that bears thy name!
Why doth that fire, which by thy power and might
Each breast does feel, no braver fuel choose
Than that, which one day, worms may chance refuse.

Sure Lord, there is enough in thee to dry
Oceans of ink; for, as the Deluge did
Cover the earth, so doth thy Majesty:
Each cloud distills thy praise, and doth forbid
Poets to turn it to another use.
Roses and lilies speak thee; and to make
A pair of cheeks of them, is thy abuse
Why should I women's eyes for crystal take?
Such poor invention burns in their low mind
Whose fire is wild, and doth not upward go
To praise, and on thee, Lord, some ink bestow.
Open the bones, and you shall nothing find
In the best face but filth; when Lord, in thee
The beauty lies in the discovery.

While matriculated at Trinity College, Cambridge, Herbert took the post of public orator of Cambridge, a position to which he was probably appointed because of his poetic skill. During his time at Cambridge, Herbert published his first poems, a pair of elegies written in Latin, mourning the death of Prince Henry. Herbert called his position as public orator ‘the best place in the university.’ The two previous orators had risen to high position of influence in English society, and Herbert initially hoped to do the same. In 1624 Herbert became a Member of Parliament, and a political career seemed to be just beginning. Herbert himself indicated in private correspondence that he hoped to attain an appointment to the court of James I. However, in 1625 James died, and two other patrons who had shown Herbert political favor died shortly thereafter. Turning away from a life in politics, Herbert turned towards the Church, and was ordained as a priest.

In 1630 Herbert became a rector in the small village of Bemerton. During this time he became close friends with Nicholas Ferrar, a former resident of the village who had founded a religious community a few miles away in the town of Little Gidding (a name, now connected with one of the sections of T.S. Eliot's epic poem Four Quartets, in which Eliot was directly alluding to Ferrar's community and the metaphysical poets.) During this time Herbert devoted himself to his parish and to the work of repairing and expanding the village church. He wrote poems continuously through this time, including all of the great poems for which he would be remembered, but never attempted to publish any of them.

Suffering from failing health only three years after having taken up the priesthood, Herbert, on his deathbed, gave a collection of his poems to Farrar, asking that they be published if they might "turn to the advantage of any dejected poor soul"; and otherwise, to burn them. Herbert described the poems as "a picture of the many spiritual conflicts that have passed between God and my soul, before I could subject mine to the will of Jesus, my Master, in whose service I have now found perfect freedom." Farrar had them published immediately under the title The Temple: Sacred Poems And Private Ejaculations, better known today as simply The Temple. By 1680, Herbert's poems were so popular they had gone through over thirteen printings.

The mature poetry of The Temple is remarkable for a number of reasons. Like Donne, Herbert became a master of metaphor, both in extended, poem-long conceits and brief flashes of completely unexpected connections. A memorable instance of Herbert's talent of metaphor can be found in the following, famous excerpt from “The Book of Sand,” the first line of which has become one of the most popular literary commonplaces:

Thy rope of sands,
Which petty thoughts have made, and made to thee
Good cable, to enforce and draw,
And be thy law,
While thou didst wink and would not see.

Herbert's poetry also utilizes a naturalness of speech and a plainness of language that was characteristic of the metaphysical poets. However, where Herbert stands out (and one of the reasons for his lasting popularity) is in the strikingly autobiographical, almost confessional tone of his poetry. One gets the sense that Herbert is not concerned with achieving fame or "literary greatness" or any of the other glorified laurels of art. Herbert's poetry has more the feel of listening to the voice of a man earnestly working out his own doubts and spiritual struggles. The result is that, despite the fact that the poetry is nearly four hundred years old, Herbert's poetry has a distinctly modern feel. Consider the following lines from the poem “Denial”:

When my devotions could not pierce
Thy silent ears,
Then was my heart broken, as was my verse;
My breast was full of fears
And disorder;

My bent thoughts, like a brittle bow,
Did fly asunder:
each took his way; some would to pleasures go,
Some to the wars and thunder
Of alarms

As good go anywhere, they say,
As to benumb
Both knees and heart in crying night and day,
'Come, come, my God, O come!'
But no hearing.

Therefore my soul lay out of sight,
Untuned, unstrung;
My feeble spirit, unable to look right,
Like a nipped blossom, hung
Discontented.

O cheer and tune my heartless breast;
Defer no time,
That so thy favors granting my request,
They and my mind may chime,
And mend my rhyme

Here, in this poem, Herbert demonstrates perhaps his most prominent quality as a poet: his parsimonious use of language—the selection, that is, of just the right words, and nothing more. Unlike most other poets writing in the seventeenth century, Herbert attempted throughout his poetic career to write less and less instead of more and more. The precision of his language in his finest poems is unmatched among his peers. Consider the "silent ear," the "heartless breast," and the echoing of the final couplet's chimes in the ending rhymes. Herbert's mastery of just the right details in just the right order has made him, after centuries of neglect, one of the most beloved poets of the seventeenth century, and his influence has extended to, among others Gerard Manley Hopkins, Elizabeth Bishop, and James Merill.

Retrieved from https://www.newworldencyclopedia.org/p/index.php?title=George_Herbert&oldid=1005151
Categories:
This page was last edited on 14 June 2017, at 21:22.
Content is available under Creative Commons Attribution/Share-Alike License; additional terms may apply. See Terms of Use for details.