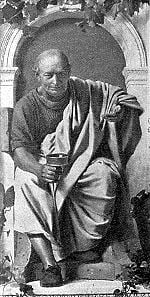 Quintus Horatius Flaccus, (December 8, 65 B.C.E. - November 27, 8 B.C.E.), known in the English-speaking world as Horace, was the leading Roman poet during the reign of Augustus Caesar. Horace was known in his own time primarily for his Odes, a series of poems written in imitation of ancient Greek classics. The Odes display Horace's mastery of ancient verse-forms, and in particular showcase his unique ability to create beautiful poetry in Latin, using difficult forms that were designed for the language of the ancient Greeks. Horace's Odes are considered some of the most beautiful works ever written in Latin, and his mastery of the language and the almost musical beauty of his lines has made him one of the most frequently studied and imitated Latin writers of all time.

Unfortunately, however, the lyrical beauty and technical mastery of Horace's Odes have proven incredibly difficult to translate and, following the decline of Latin as a scholarly language, the Odes have fallen further and further into desuetude (no longer used). Today, Horace is primarily known for his instructional poetry, particularly the Epistles, which contain what is probably his most influential work, a verse-essay on the art of poetry entitled Ars Poetica. In this work he stresses, among other things, his belief that poetry must be "wholesome"— that is, educational—in addition to being beautiful, arguing that a thorough understanding of the technical aspects of poetry is necessary in order to be a truly successful poet. The Classicist movement that would emerge in the [[Renaissance[[ through Petrarch and Dante and, later, re-emerge in eighteenth- and nineteenth-century Europe would esteem Horace as the greatest poet of all of ancient Rome next to Virgil. Generations of later poets would be inspired by Horace's rectitude, his devotion to tradition and to form, and his overwhelming concern with the importance of moral instruction in poetry. Horace is, undoubtedly, one of the more difficult poets of the ancient world for the modern-day reader to tackle; but, given the effort, he is easily one of the most rewarding poets of his era.

Born at Venosa or Venusia, as it was called in his day, a small town in the border region between Apulia and Lucania, Horace was the son of a former slave, but he was born free. His father worked as a coactor, a kind of middleman at auctions who would pay the purchase price to the seller and collect it later from the buyer and receive one percent of the purchase price from each of them for his services. Although Horace portrays him as a poor, honest farmer ("macro pauper agello," Satires 1.6.71), his father's business was actually one of the ways for former slaves to amass wealth. Not surprisingly, the elder Horace was able to spend considerable money on his son's education, accompanying him first to Rome for his primary education, and then sending him to Athens to study Greek and philosophy. The poet later expressed his gratitude in a touching tribute to his father. In his own words:

If my character is flawed by a few minor faults, but is otherwise decent and moral, if you can point out only a few scattered blemishes on an otherwise immaculate surface, if no one can accuse me of greed, or of prurience, or of profligacy, if I live a virtuous life, free of defilement (pardon, for a moment, my self-praise), and if I am to my friends a good friend, my father deserves all the credit… As it is now, he deserves from me unstinting gratitude and praise. I could never be ashamed of such a father, nor do I feel any need, as many people do, to apologize for being a freedman's son. Satires 1.6.65-92

After the assassination of Julius Caesar, Horace joined the army, serving under the generalship of Brutus. He fought as a staff officer (tribunus militum) in the Battle of Philippi. Alluding to famous literary models, he later claimed that he saved himself by throwing away his shield and fleeing the battlefield. When an amnesty was declared for those who had fought against the victorious Octavian (later known as Augustus), Horace returned to Italy, only to find his estate confiscated and his father dead. Horace claims that he was reduced to poverty. He nevertheless had the means to purchase a profitable life-time appointment as an official of the treasury, which allowed him to get by comfortably and practice his poetic art.

Horace was a member of a literary circle that included Virgil and Lucius Varius Rufus; they introduced him to Maecenas, friend and confidant of Augustus. Maecenas became his patron and close friend, and presented Horace with an estate near Tibur in the Sabine Hills, contemporary Tivoli. Upon his death bed, having no heirs, Horace relinquished his farm to his friend and Emperor Augustus, to be used for Imperial needs. His farm is there today and remains a place of pilgrimage for literary-minded tourists.

Horace is considered by classicists to be, along with Virgil, among the greatest of the Latin poets.

He coined many wise and pithy sayings that remain in use (in Latin or in translation) to this day, including:

His works (like those of all but the earliest Latin poets) are written in Greek meters, from the hexameter, which was relatively easy to adapt to Latin, to the more complex measures used in the Odes, like Alcaic verses and Sapphic stanzas, which were sometimes a difficult fit for Latin grammatical structure and syntax. Horace, more than any other Latin poet, managed to merge Greek forms with Latin syntax, producing poems that are both steeped in the ancient tradition and yet eminently readable and beautiful. Here, for instance, in Ode 1.9, Horace adapts the ancient Greek Sapphic stanza-form—a tremendously difficult form to adapt to Latin—and renders a beautiful, tender scene of "winter without, wine within":