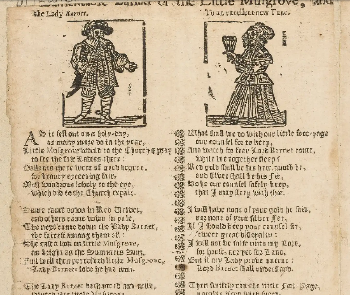 Arthur Rackham created several illustrations for the popular ballads of his time.

A ballad is a story, usually portraying a dramatic or exciting episode or narrative, which is placed in a song, poem, or verse by an individual or a communal source. Any story may be communicated as a ballad, such as historical accounts, familial traditions, or fairy tales among many other examples, and these verse forms comprise a familiar oral tradition. A ballad usually has foreshortened, alternating four and three stress lines called a "ballad meter" with simple repeating rhymes, often with a refrain.

In traditional and preliterate societies, the ballad served to carry on a living oral tradition. As a vehicle of the story, a ballad contributes toward a remembrance of historical accounts, familial traditions, and stories by people who may have no other means of recording events. The retelling in song is communicated with a refrain or repetitious phrase at the end of a stanza or section to reinforce a teaching or code of behavior.

If it is based on political or religious themes, a ballad may be a hymn. It should not be confused with the ballade, a fourteenth and fifteenth century French verse form or musical form.

A Ballad is usually meant to be sung or recited.

Broadsheet ballads, also known as broadside ballads, were inexpensively printed and hawked in English streets from the sixteenth century. They were often topical, humorous, and even subversive. For example, the legends of Robin Hood and the pranks of Puck were disseminated through broadsheet ballads.

New ballads were written about current events like fires, the birth of monstrous animals, and so forth, particularly giving notoriety to certain names and places. Satirical royalist ballads and monarchism contributed to seventeenth century political discourse. In a sense, these ballads were antecedents of the modern newspaper.

Bishop Thomas Percy, 1st Earl of Oxford Robert Harley, Francis James Child, Sir Walter Scott, and James Hogg were early collectors and publishers of ballads from the oral tradition, broadsheets and previous anthologies. Percy's publication of Reliques of Ancient Poetry and Harley's collections, such as The Bagford Ballads, were of great importance in the study of ballads. Some of the collectors also wrote new ballads. Many ballads are referenced in scholarly works by their number in Child's compilation (see the Child Ballads). The American poet Carl Sandburg was influenced by ballads, and published a collection he had assembled as The American Songbag (1927).

The form of a ballad was much used in nineteenth century poetry. William Wordsworth and Samuel Taylor Coleridge signaled the populist intent of their first major work, Lyrical Ballads. The vogue continued through such Victorian poets as Dante Gabriel Rossetti, who used the form for his early work, "The Blessed Damozel" and towards the end of his career in the 1881 Ballads and Sonnets. Ballads have also been imitated in modern poetry, most notably by the Canadian ballads of Robert W. Service, in Rudyard Kipling's "Road to Mandalay" and in "Casey at the Bat." "The Ballad of the Bread-man" is Charles Causley's re-telling of the story of the birth of Jesus. Many modern written musical ballads are in the repertory of American folk music.

A subgenre of the broadsheet ballad is the murder ballad. Usually told from the point of view of the killer, murder ballads typically recount the details of the crime, who the victim is, why the murderer decides to kill him or her, how he or she is lured to the murder site and the act itself followed by the escape and/or capture of the murderer. Often the ballad ends with the murderer in jail or on his or her way to the gallows, occasionally with a plea for the listener to learn from the evils committed by the speaker.

Border ballads are a subgenre of folk ballads collected in the area along the English-Scottish border. They are especially concerned with border reivers (reavers) and outlaws, or with historical events in the border countries.

Notable historical ballads include "The Battle of Otterburn," "The Hunting of Cheviot," and "The Ballad of Chevy Chase."

Outlaw ballads include "Johnnie Armstrong," "Kinmont Willie," and "Jock o' the Side."

Other types of ballads, including fairy ballads such as "Thomas the Rhymer," are often included in the category of border ballads.

Literary ballads are those composed and written formally. The form, with its connotations of simple folkloric authenticity, became popular with the rise of Romanticism in the later eighteenth century. Literary ballads may then be set to music, as Franz Schubert's Der Erlkönig, set to a literary ballad by Johann Wolfgang von Goethe (see also Der Zauberlehrling). In Romantic opera, a ballad set into the musical texture may emphasize or play against the theatrical moment. Atmospheric ballads in operas were initiated in Carl Maria von Weber's Der Freischütz, Senta's ballad in Richard Wagner's Der fliegende Holländer, and the "old song" "Salce" that Desdemona sings in Giuseppe Verdi's Otello. One should compare the stanza-like structure and narrative atmosphere of the musical Ballades for solo piano of Frédéric Chopin or Johannes Brahms.

The ballad opera, a particularly English form, has as its most famous example John Gay's The Beggar's Opera, which inspired the twentieth century cabaret operas of Bertolt Brecht and Kurt Weill. Ballad strophes usually alternate between iambic tetrameter and iambic pentameter, though this is not always the case.

In the twentieth century, "ballad" took on the meaning of a popular song "especially of a romantic or sentimental nature," according to the American Heritage Dictionary. Casting directors often divide songs into two categories: "ballads" (slower or sentimental songs) and "up" tunes (faster or happier songs). A power ballad is a love song performed using rock instruments.

Some of these also qualify under the pop definition.

Thousands of songs could be listed here. The following may represent the variety that is available: