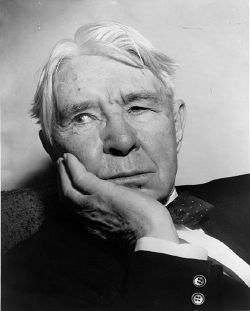 Carl August Sandburg (January 6, 1878 – July 22, 1967) was an American poet, historian, novelist, balladeer and folklorist. H. L. Mencken called Carl Sandburg "indubitably an American in every pulse-beat," and he is one of the most indubitably American poets of the early twentieth century. Although he was a contemporary of such Modernists as Ezra Pound and T.S. Eliot, Sandburg never delved into the sort of dense complexity that defined much of the poetry of his times. Instead, taking a cue from Walt Whitman, Sandburg wrote poetry in everyday language to the rhythms of everyday speech. His poetry sings and celebrates America as a vast land of vast opportunity—and also suggests how far America has yet to go to deliver on its promise of liberty and justice for all. With the free, rolling energy of his unrhymed verses, Sandburg's poetry is among the most prophetic works of twentieth century American literature.

Born in Galesburg, Illinois, Carl Sandburg was raised in a relatively poor family of Swedish immigrants in a rural region of the American Midwest. Sandburg's youth was spent working to help support the family home; he had little time for education, and from the age of 11 he worked in the wheat fields, as well as taking oddjobs as a bricklayer, barber, and truck driver.

During the Spanish-American War, Sandburg enlisted in the 6th Illinois Infantry, participating in the landing at Guánica on July 25, 1898, during the invasion of Puerto Rico. Following a brief, two-week long career as a student at the United States Military Academy at West Point with Douglas MacArthur, Sandburg chose to attend Lombard College in Galesburg. He left college without a degree in 1902.

Sandburg lived for a brief period in Milwaukee, Wisconsin, during which time he became a member of the Social Democratic Party of the United States and took a strong interest in socialist ideology. He worked as a secretary to Mayor Emil Seidel of Milwaukee, the first socialist mayor in the United States. Sandburg met Lilian Steichen, sister of the famed photographer, Edward Steichen, at the Social Democratic Headquarters in Milwaukee. Lilian and Carl were married in 1908; they would go on to have three daughters.

In 1912, the Sandburgs would move to Chicago, the city which Sandburg would later immortalize in his rollicking all-American verse. He worked as an editor for System, a small business periodical, later finding work as part of the editorial staff of the Chicago Daily News. In 1914, some of Sandburg's earliest "Chicago poems" appeared in Poetry magazine. Sandburg's poems were received warmly by the American literary public, and Sandburg published a second volume Good Morning, America in 1928, and a third The People, Yes in 1936. During these years, however, Sandburg devoted a great deal of his time to composing his massive, six-volume biography of Abraham Lincoln that would later earn him the Pulitzer Prize for history. In addition to his output as a poet, historian, and news writer, Sandburg also became deeply interested in American folk music; he traveled the country collecting folk songs, publishing them in the widely popular volume The American Songbag.

In 1945, the Sandburg family moved from the Midwest, where they'd spent most of their lives, to the Connemara estate, in Flat Rock, North Carolina. Connemara was ideal for the family, as it gave Mr. Sandburg an entire mountain top to roam and enough solitude for him to write. Sandburg continued to write poems during these later years, but his removal from the American Midwest that had inspired so much of his poetry proved draining on his creative energies, and the last two decades of his life would not see the production of the masterpieces that had illuminated his earlier years.

Sandburg's poetry was deeply influenced by Walt Whitman. Along with Robert Frost and William Carlos Williams, Sandburg is one of the most prominent Americanist poets of the twentieth century. Although he lived during the period of literary Modernism and lived to see a number of wildly experimental and abstruse developments in poetry, Sandburg's poems stuck close to the American grain, written in the rhythms of everyday speech and in a uniquely American idiom.

Sandburg freely embraced the wild, untamed free verse of Whitman, and his poems often read like wildly energetic chants, full of gusto and the American spirit. Consider, for instance, one of Sandburg's most famous poems, "Chicago:"

HOG Butcher for the World,
Tool Maker, Stacker of Wheat,
Player with Railroads and the Nation’s Freight Handler;
Stormy, husky, brawling,
City of the Big Shoulders:

They tell me you are wicked and I believe them, for I have seen your painted women under the gas lamps luring the farm boys.
And they tell me you are crooked and I answer: Yes, it is true I have seen the gunman kill and go free to kill again.
And they tell me you are brutal and my reply is: On the faces of women and children I have seen the marks of wanton hunger.
And having answered so I turn once more to those who sneer at this my city, and I give them back the sneer and say to them:
Come and show me another city with lifted head singing so proud to be alive and coarse and strong and cunning.
Flinging magnetic curses amid the toil of piling job on job, here is a tall bold slugger set vivid against the little soft cities;
Fierce as a dog with tongue lapping for action, cunning as a savage pitted against the wilderness,

Under the smoke, dust all over his mouth, laughing with white teeth,
Under the terrible burden of destiny laughing as a young man laughs,
Laughing even as an ignorant fighter laughs who has never lost a battle,
Bragging and laughing that under his wrist is the pulse. and under his ribs the heart of the people,

Laughing the stormy, husky, brawling laughter of Youth, half-naked, sweating, proud to be Hog :Butcher, Tool Maker, Stacker of Wheat, Player with Railroads and Freight Handler to the Nation.

In addition to powerful, Whitmanesque poems full of energy and declaration such as this, Sandburg was also capable, occasionally, of beautiful miniatures that read almost like haiku. Here, for instance, is "Fog", one of Sandburg's most widely-anthologized poems:

It sits looking
over harbor and city
on silent haunches
and then moves on.

Sandburg's influence extends far, and many poets of the early twentieth century who were searching for a uniquely American style of poetry found, in Sandburg, an inspiration. A number of American poets, perhaps most notably Langston Hughes, have acknowledged their debt to his poetry. Although Sandburg was never a major figure of Modernism, like Pound, or a literary celebrity like Frost, his impact on the development of a folk-centered, down-to-earth, uniquely American poetry is substantial, and he continues to be one of the more frequently read poets of the early twentieth century.

Sandburg is also beloved by generations of children for his Rootabaga Stories and Rootabaga Pigeons, a series of whimsical, sometimes melancholy stories he originally created for his own daughters. The Rootabaga Stories were born of Sandburg's desire for "American fairy tales" to match American childhood. He felt that the European stories involving royalty and knights were inappropriate, and so populated his stories with skyscrapers, trains, corn fairies, and the "Five Marrrrvelous Pretzels".