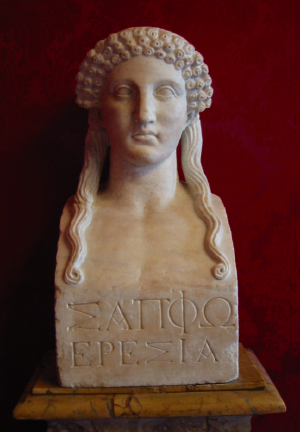 Sappho (Attic Greek Σαπφώ Sapphô, Aeolic Greek Ψάπφα Psappha) was an Ancient Greek lyric poet. Along with the other nine lyric poets of ancient Greece, Sappho's poetry was required reading for Greek citizens, and her influence on Greek literature and thought is immeasurable. Virtually every ancient Greek poet and historian praised Sappho as the greatest of all lyric poets—Plato himself went so far as to declare Sappho "the tenth Muse"—and so it is all the more unfortunate that so very little of Sappho's work has survived into the present day. Although she remained popular and well-read into the Roman period, by the Middle Ages all copies of her works had gradually rotted away. Only a single complete poem of Sappho survives, along with hundreds of fragments—some almost complete poems in themselves and others no more than a handful of words.

It is difficult to argue that Sappho remains an influential literary figure, due to the fact that her works have been almost obliterated. What fragments do remain show glimpses of her genius, as well as giving us a clue to her style: Sappho's poetry was written with a clarity of image and sparseness of language unprecedented in ancient Greece; some scholars have drawn comparisons to the image-centered poetry of ancient China, and indeed there is almost nothing like her poetry in the ancient world.

Even though her poetry no longer exists, her influence on ancient literature is undeniable. Virtually every writer of the ancient world, from Plato to Virgil, was familiar with her poetry, and many poems written explicitly in imitation of her survive. Her fame, which was still immense nearly a thousand years after her death, suggests how wide her influence must have been. In our own times Sappho has become an almost mythological figure—the absence of her works only adding to her intrigue—and writers and poets continue to invoke Sappho in spirit as one of the greatest authors of the ancient world.

Sappho is believed to have been the daughter of Scamander and Cleïs and to have had three brothers. She was married (Attic comedy says to a wealthy merchant, but that is apocryphal), but the name of her husband is disputed. Some translators have interpreted a poem about a girl named Cleïs as evidence that she had a daughter by that name. It was a common practice of the time to name daughters after grandmothers, so there is some basis for this interpretation. But the actual Aeolic word pais was more often used to indicate a slave or any young girl, rather than a daughter. In order to avoid misrepresenting the unknowable status of young Cleïs, translator Diane Rayor and others, such as David Campbell, chose to use the more neutral word "child" in their versions of the poem.

Sappho was born into an aristocratic family, which is reflected in the sophistication of her language and the sometimes rarefied environments which her verses record. References to dances, festivals, religious rites, military fleets, parading armies, generals, and ladies of the ancient courts abound in her writings. She speaks of time spent in Lydia, one of the wealthiest and most powerful countries of that time. More specifically, Sappho speaks of her friends and happy times among the ladies of Sardis, capital of Lydia, once the home of Croesus and near the gold-rich lands of King Midas.

A violent coup on Lesbos, following a rebellion led by Pittacus, toppled the ruling families from power. For many years, Sappho and other members of the aristocracy, including fellow poet Alcaeus, were exiled. Her poetry speaks bitterly of the mistreatment she suffered during those years. Much of her exile was spent in Syracuse on the island of Sicily. Upon hearing that the famous Sappho would be coming to their city, the people of Syracuse built a statue of her as a form of welcome. Much later, in 581 B.C.E., when Pittacus was no longer in power, she was able to return to her homeland.

Contributions to the lyric tradition

Plato called Sappho "The Tenth Muse," and the rest of the ancient critics agreed. She was one of the canonical nine lyric poets of archaic Greece, which meant that her works were studied by all those wishing to claim that they were properly educated. Older critics sometimes alleged that she led an aesthetic movement away from typical themes of gods to the themes of individual human experiences and emotions, but it is now considered more likely that her work belongs in a long tradition of lyric poetry, and is simply among the first lyric poetry to have been recorded in writing.

During Sappho's lifetime—and in much of Greek poetry thereafter—poetic form was significantly different than the poetic forms of more familiar poets such as Shakespeare. Greek poetry was written in meter much like poetry today, but while Western meters create a pattern between accented and unaccented syllables, Greek meters, such as Sappho's, created a pattern between the lengths of vowels. That is, the vowels in Sappho's poems are either long or short according to a regular pattern. The phonology of ancient Greek was such that this style of poetic meter was possible; but the pronunciation and number of vowels in modern Western languages is drastically different, and it is impossible to render Sapphic meter into a modern language like English.

Like all early lyric poetry, Sappho's works were composed to be either sung or recited to music, in particular to the accompaniment of the lyre (hence the term, lyric poetry). Her extant poetry is in the form of monody, which means that it was designed to be sung by a single voice rather than by a choir. Plutarch credited Sappho with creating the Mixolydian mode of musical composition, which uses a descending scale of notes from b to B. She also developed what is now called the Sapphic stanza as a form of metrical poetry.

Transmission and loss of Sappho's works

Although Sappho's work endured well into Roman times, her work was copied less and less, especially after the academies stopped requiring her study. Part of the reason for her disappearance from the standard canon was the predominance of Attic and Homeric Greek as the languages required for studied. By Roman times Sappho's Aeolic dialect, a difficult one, was arcane and ancient, posing considerable obstacles to her continued popularity.

Once the major academies of the Byzantine Empire dropped her works from their standard curricula, very few copies of her works were made by scribes. Still, the greatest poets and thinkers of ancient Rome continued to emulate her or compare other writers to her, and it is through these comparisons and descriptions that we have received much of her extant poetry.

Some copies of her work have been discovered in Egyptian papyri. A major find at Oxyrhynchus brought many new but tattered verses to light.[1] From the time of the European Renaissance, the interest in Sappho's writing has grown, seeing waves of fairly widespread popularity as new generations rediscover her work. Since few people are able to understand ancient languages, each age has translated Sappho in its own idiomatic way.

In the 1960s Mary Barnard reintroduced Sappho to the reading public with a new approach to translation that eschewed the cumbersome use of rhyming stanzas or forms of poetry, such as the sonnet, which were grossly unsuited to Sappho's style. Barnard's translations featured spare, fresh language that better reflected the clarity of Sappho's lines. Her work signaled a new appreciation and hunger for Sappho's poetry. Subsequent translators have tended to work in a similar manner, seeking to allow the essence of Sappho's spirit to be visible through the translated verses.

Ancient sources state that Sappho produced nine volumes of poetry, but only a small proportion of her work survives. Papyrus fragments, such as those found in the ancient rubbish heaps of Oxyrhynchus, are an important source. One substantial fragment is preserved on a potsherd. The rest of what we know of Sappho comes through citations in other ancient writers, often made to illustrate grammar, vocabulary, or meter.

There is a single complete poem, Fragment 1, Hymn to Aphrodite (or Ode to Aphrodite) in which the speaker calls on the help of Aphrodite in the pursuit of a beloved. The poem – composed in Sapphic stanzas – has only two places of uncertainty in the text. The seriousness with which Sappho intended the poem is disputed, though at least parts of the work appear to be intentionally humorous. The poem makes use of Homeric language, and alludes to episodes from the Iliad. It is generally accepted that the poem is an expression of unrequited love of Sappho herself for another woman, although the sex of Sappho’s beloved is indicated by only one word.[2]

A collection of modern English translations suitable for a general audience, includes complete poems and fragments along with a brief history of each of the featured poets.

Contains complete Greek text and English translation, including references to Sappho by ancient authors. A good starting-point for serious students who are new to this poetry.

A review of Anne Carson's work, If Not, Winter.