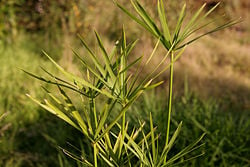 Papyrus (The plural of papyrus is papyri) is an early form of thick paper-like material produced from the pith of the papyrus plant, Cyperus papyrus, a wetland sedge that was once abundant in the Nile Delta of Egypt. Papyrus usually grows two to three meters (five to nine feet) tall, although some have reached as high as five meters (15 feet). Papyrus is first known to have been used in ancient Egypt (at least as far back as the First dynasty), but it was also widely used throughout the Mediterranean region, as well as inland parts of Europe and southwest Asia.

The study of ancient literature, correspondence, legal archives, and others, as preserved in manuscripts written on papyrus, is called Papyrology. Papyrology deals with both the interpretation of the contents and preservation of the original papyrus documents.

The English word papyrus derives, via Latin, from Greek πάπυρος (papyros). Greek has a second word for papyrus, βύβλος (byblos; said to derive from the name of the Phoenician city of Byblos). The Greek writer Theophrastus, who flourished during the fourth century B.C.E., uses papuros when referring to the plant used as a foodstuff and bublos for the same plant when used for non-food products, such as cordage, basketry, or a writing surface. This latter usage finds its way into English in such words as bibliography, bibliophile, and bible. Papyrus is also the etymon of paper, a similar substance. The plural of papyrus is papyri.

It is often claimed that Egyptians referred to papyrus as pa-per-aa [p3y pr-ˁ3] (lit., "that which is of Pharaoh"), apparently denoting that the Egyptian crown owned a monopoly on papyrus production. However no actual ancient text using this term is known. In the Egyptian language, papyrus was known by the terms wadj [w3ḏ], tjufy [ṯwfy], and djet [ḏt]. Thus in reality, Greek papyros has no known relation to any Egyptian word or phrase. A sheet of papyrus is made from the stem of the plant. The outer rind is first stripped off, and the sticky fibrous inner pith is cut lengthwise into thin strips about 40 cm long. The strips are then placed side by side on a hard surface with their edges slightly overlapping, and then another layer of strips is laid on top at a right angle. The strips may have been soaked in water long enough for decomposition to begin, perhaps increasing adhesion, but this is not certain. While still moist, the two layers are hammered together, mashing the layers into a single sheet. The sheet is then dried under pressure. After drying, the sheet of papyrus is polished with some rounded object, possibly a stone or seashell.

To form the long strip that a scroll required, a number of such sheets were united, placed so that all the horizontal fibers parallel with the roll's length were on one side and all the vertical fibers on the other. Normally, texts were first written on the recto, the lines following the fibers, parallel to the long edges of the scroll. Secondarily, papyrus was often reused, writing across the fibers on the verso.[1] 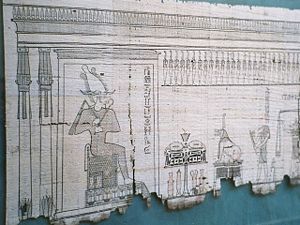 In a dry climate like that of Egypt, papyrus is stable, formed as it is of highly rot-resistant cellulose; but storage in humid conditions can result in molds attacking and eventually destroying the material. In European conditions, papyrus seems only to have lasted a matter of decades; a 200–year-old papyrus was considered extraordinary. Imported papyrus that was once commonplace in Greece and Italy has since deteriorated beyond repair, but papyrus is still being found in Egypt; extraordinary examples include the Elephantine papyri and the famous finds at Oxyrhynchus and Nag Hammadi. The Villa of the Papyri at Herculaneum, containing the library of Lucius Calpurnius Piso Caesoninus, Julius Caesar's father-in-law, was preserved by the eruption of Mount Vesuvius, but has only been partially excavated.

In the first centuries B.C.E. and C.E., papyrus scrolls gained a rival as a writing surface in the form of parchment, which was prepared from animal skins. Sheets of parchment were folded to form quires from which book-form codices were fashioned. Early Christian writers soon adopted the codex form, and in the Græco-Roman world, it became common to cut sheets from papyrus rolls in order to form codices. 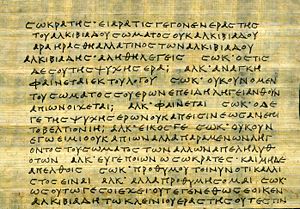 Codices were an improvement on the papyrus scroll as the papyrus was not flexible enough to fold without cracking and a long roll, or scroll, was required in order to create large volume texts. Papyrus had the advantage of being relatively cheap and easy to produce, but it was fragile and susceptible to both moisture and excessive dryness. Unless the papyrus was of good quality, the writing surface was irregular, and the range of media that could be used was also limited.

By 800 B.C.E. the use of parchment and vellum had replaced papyrus in many areas, though its use in Egypt continued until it was replaced by more inexpensive paper introduced by Arabs from China. The reasons for this switch include the significantly higher durability of the hide-derived materials, particularly in moist climates, and the fact that they can be manufactured anywhere. The latest certain dates for the use of papyrus are 1057 for a papal decree (typically conservative, all papal "bulls" were on papyrus until 1022) and 1087 for an Arabic document. Papyrus was used as late as the 1100s in the Byzantine Empire, but there are no known surviving examples. Although its uses had transferred to parchment, papyrus therefore just overlapped with the use of paper in Europe, which began in the eleventh century.

There have been sporadic attempts to revive the manufacture of papyrus during the past 250 years. The Scottish explorer James Bruce experimented in the late eighteenth century with papyrus plants from the Sudan, for papyrus had become extinct in Egypt. Also in the eighteenth century, a Sicilian named Saverio Landolina manufactured papyrus at Syracuse, where papyrus plants had continued to grow in the wild. The modern technique of papyrus production used in Egypt for the tourist trade was developed in 1962 by the Egyptian engineer Hassan Ragab using plants that had been reintroduced into Egypt in 1872 from France. Both Sicily and Egypt continue to have centers of limited papyrus production.

Papyrus is still much used by communities living in the vicinity of swamps for other reasons, to the extent that rural householders derive up to 75 percent of their income from swamp goods and are most important for the poorer sectors of society. Particularly in East and Central Africa, people harvest papyrus, which is used to manufacture handcrafts that are sold or used by makers themselves. Examples include baskets, hats, fish traps, trays or winnowing mats and floor mats. Papyrus is also used to make roofs, ceilings, rope and fences, or as fuel. Although increasingly, alternative fuel sources, such as eucalyptus, are available, the use of papyrus as fuel is still practiced by a minority of residents, particularly those without land or beverage makers. In western Kenya, other wetland plants associated with papyrus swamps are used as condiments or have medicinal purposes. Several fish are also extracted directly from papyrus swamps, particularly catfish, lungfish and in some areas, introduced Louisiana crayfish. Fish are the most important source of animal protein in African diets. Game such as sitatunga are also occasionally captured from swamps and are another important source of protein. The swamps are also a source of brick-making clay, an increasingly important resource given rapid population growth, urbanization and desire for better housing in Africa.

Papyrology is the study of ancient literature, correspondence, legal archives, etc., as preserved in manuscripts written on papyrus, the most common form of writing material in the Egyptian, Greek and Roman worlds. Papyrology entails both the translation and interpretation of ancient documents in a variety of languages, as well as the care and preservation of the papyrus originals.

Papyrology as a systematic discipline dates from the 1890s, when large caches of well-preserved papyri were discovered by archaeologists in several locations in Egypt, such as Crocodilopolis (Arsinoe) and Oxyrhynchus. (See Oxyrhynchus Gospels.) Leading centers of papyrology include Oxford University, Heidelberg University, Columbia University, the University of Michigan, the Österreichische Nationalbibliothek, and the University of California, Berkeley. Founders of papyrology were the Viennese orientalist Johann Karabacek, W. Schubart, Th. Graf, G.F. Tsereteli, Fr. Taschner and others.

The collection of pagan, Christian and Arabic papyri in Vienna called the Rainer papyri represents the first large discovery of manuscripts on papyrus found in the Fayum in Egypt. About 1880 a carpet trader in Cairo acquired on behalf of Karabacek over 10,000 papyri and some texts written on linen. Of those over 3000 are written in Arabic. The papyri originated from Kôm Fâris (Krokodílon Pólis) and Ihnasiyyah al-Madinah (Herakleopolis Magna), the textile pages from Kôm al-‘Azâma. They were exported to Vienna in 1882, and presented in a public exhibition the following year that caused a sensation. Later the papyri were bought by the Grand Duke Rainer and presented to the Kaiserliche Akademie der Wissenschaften in Vienna.