Catfish (order Siluriformes) are a diverse group of fish. They are named for their prominent barbels, slender, whisker-like tactile organs near the mouth, which give the image of cat-like whiskers.

Catfish are very diverse, ranking second or third in diversity among orders of vertebrates, with almost 3,000 known species.[1] About one in every ten species of fish, and one in every 20 vertebrates, is a catfish.[2]

Catfish are found primarily in freshwater environments of all kinds, with species on every continent except Antarctica. Some species from the families Ariidae and Plotosidae are also found in marine environments. They feature some of the smallest known vertebrates, including the candiru (toothpick fish), the only vertebrate parasite to attack humans, as well as Mekong giant catfish, the largest reported freshwater fish.

Catfish include bony-plated types and also smooth, naked types, but they do not have scales. Not all catfish families have prominent barbels; what defines a fish as being in the order Siluriformes are certain features of the skull and swimbladder.

Unlike most fish, catfish do not have scales. They usually have an adipose fin (fleshy, rayless posterior fin), and often spine-like rays (spines) present at the front of the dorsal and pectoral fins.[3] The dorsal fin of most catfish species technically has two spines, the first one very short.[4] As noted, the catfish body may be naked or covered with bony plates. Normally, there are up to four pairs of barbels on the head, with two on the chin, one nasal, and one maxillary, but the nasal and chin barbels may be absent.[5] With the exception of the Diplomystidae (among extant families), the maxilla is toothless.[6]

Some catfish are known to communicate with one other. There are some species that use a method known as stridulation to produce communicative sounds, such as marine catfish that have the base of the pectoral fin rubbing against the pectoral girdle to produce sounds. Others make use of the springferderapparat (elastic spring apparatus or modified swim bladder mechanism) to create vibrations in the swim bladder to produce sounds.[7]

The madtoms of E North American streams have brightly colored patterns, but the majority of catfish are dull-colored.[8]

Some catfish species can inflict painful stings with their spines, such as the case with the stone and tadpole catfishes and the madtom. The strong, hollow, bonified leading ray on their dorsal and particularly the pectoral fins can emit a stinging protein, which comes from poison glands in the epidermal tissue covering the spines.[9] In members of the family Plotosidae, and of the genus Heteropneustes, this protein is so strong it may hospitalize humans unfortunate enough to receive a sting. Stings from Plotosus lineatus can result in death.[10] In many catfish, these fins may be held open and locked in place. Most are passive stingers, but Heteropneustes fossilis of India is aggressive, with records of attacks on humans.[11]

Siluriformes are monophyletic in their development of the upper jaw, which is able to move and support the catfishes barbels.[12].

Catfish can live up to 60 years depending on location and species.

Catfish have well developed sensory organs, with many such organs covering their bodies.

A catfish’s hearing apparatus, which detect vibrations, is in its swim bladder, whereas the swim bladder on most fish is independent of the inner ear.[13] In catfish, a series of vertebral bones known as the Weberian apparatus, connect the swim bladder and inner ear.[14] Most fish including bass and trout, for example do not have these bone connections and they can detect sounds of only about 20 to 1,000 cycles per second. But catfish' hearing is much more acute. They can hear sounds sounds up to about 13,000 cycles per second.[15]

Sounds that are too soft to be heard by the inner ear are picked up by a series of little pores found running down the length of the fish called the lateral line. These pores can also be found around the fish's eye, on its lower jaw, and head. There are little hair-like projections inside the pores that act similarly to those in the inner ear. When these hair-like projections move in the water they cause the stimulation of the nerve endings, which in turn signals the brain. By using this system, catfish can locate their prey and find other catfish. The catfish’s lateral line can detect creatures at the surface, swimming through the water, or even walking along the shore.[16] The catfish, Corydoras arcuatus, is a good example of external tastebuds. Its smooth skin is covered with taste buds. Even the smallest catfish can have 250,000 taste buds covering its body.[17] Bullheads are ultra-sensitive to low-frequency vibrations, and the Chinese use them to detect rumblings beneath the earth’s crust days in advance.

Channel catfish raised in aquaculture ponds are also sensitive to sounds. When being fed, they respond to the feeding even when the attendant is 100 yards away.[18]

The back of the catfish's eyes are coated with a layer of crystals that reflect light allowing for excellent vision. This allows the catfish to be an astute hunter.[19] 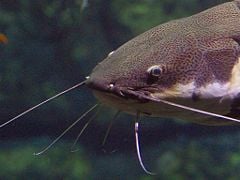 Head of the red-tailed catfish, Phractocephalus hemioliopterus, from the Amazon. This species is often offered for sale when juvenile to aquarists who little suspect it can attain 120 cm.

Catfish range in size and behavior from the heaviest, the Mekong giant catfish in Southeast Asia, and the longest, the wels catfish of Eurasia, to detritivores (species that eat dead material on the bottom), and even to a tiny parasitic species commonly called the candiru, Vandellia cirrhosa, which are known to attack humans (by entering the urethra of humans). Members of most madtom species are no more than five inches (12.7 cm) long; some are less than two in. (5 cm) long.

Danube catfish Silurus glanis called wels, or sheatfish, reach a length of 13 ft (4 m) and a weight of 400 lb (180 kg) and are the only native catfish species known of Europe, besides the much smaller related Aristotle catfish found in Greece. Mythology and literature record wels catfish of astounding proportions, but this has not been scientifically verified. The average size of the species is about 1.2 m to 1.6 m, and fish more than 2 m are very rare. The largest specimens on record measure more than 2.5 m in length and sometimes exceeded 100 kg. The wels catfish was introduced to Britain, Italy, Spain, Greece, and some other countries during the last century. The species has flourished in the warm lakes and rivers of Southern Europe. The River Danube, River Po in Italy, and the River Ebro in Spain are famous for huge wels catfish, which grow up to 2 m. These habitats contain plenty of food and lack natural predators. A very large wels catfish was caught by Kevin Maddocks on August 6, 1999, recorded at 91.62 kg (202 lb).

Tim Pruitt of Illinois caught the largest blue catfish, Ictalurus furcatus, in the Mississippi River on May 22, 2005 that weighed 56.25 kg (124 lb). The largest flathead catfish, Pylodictis olivaris, ever caught was in Independence, Kansas, weighing 56 kg (123 lb 9 oz). However, these records pale in comparison to a Mekong giant catfish caught in northern Thailand in May 1, 2005 and reported to the press almost two months later, that weighed 293 kg (646 lb). This is the largest Mekong giant catfish caught, but only since Thai officials started keeping records in 1981 ([20]. The Mekong giant catfish are not well studied and it is quite possible that they can grow even larger.

Many species of catfish in the wild spawn once a year, with sexual maturity reached from three to five years. In catfish farms, the average time for maturity decreases.

The channel catfish male builds the "nest" in mud banks along rivers, streams, lakes, or ponds. He also protects the unhatched eggs and young, which amount in number from 3,000 to 4,000 eggs per pound of the female's body weight. These male parental behaviors in finding a nest and protecting the young are common in many of the catfish species.

The flathead catfish can lay up to 100,000 eggs during one spawning cycle. After the eggs are laid, they hatch within five to ten days. Once the eggs hatch, the fry (young fish) have a yolk-like sac that nourishes them for two to five days until it dissolves and they are fully developed. They then swim up and gulp in air, which fills their swimming bladder and helps regulate their buoyancy[21].

Nelson, in 1994, in his book Fishes of the World (third edition), listed 34 families of catfish, with about 412 genera and 2,405 species.[23] The Catalog of Fishes database lists 2,855 known species of catfishes. [24] Some recognize 37 families of catfish currently, although this number varies according to the taxonomic scheme.

In June, 2005, researchers named a new family of catfish, Lacantuniidae, only the third newly discovered family of fish distinguished in the last 70 years (others being the coelacanth in 1938 and the megamouth shark in 1983). The new species in Lacantuniidae was found in the Lacantun river Chiapas, Mexico. 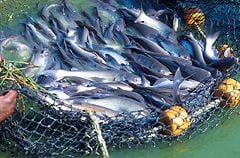 Catfish, which have a sweet, mild flesh, are important as food fish throughout the world. Ictalurids are cultivated in North America (especially in the Deep South, with Mississippi being the largest domestic catfish producer).[25] In the southeastern United States, catfish are an extremely popular food. The fish, mostly channel catfish and blue catfish, are found in most waterways in the region. A favorite catfish dish is breaded with cornmeal and fried.

Catfish are raised in warm climates, are inexpensive, and are safe food for the local grocers. The most popular catfish in Florida is the channel fish; the second most desired is the white catfish.

In Asia, many catfish species are important food fish. Several walking catfish (Clariidae) and shark catfish (Pangasiidae) species are heavily cultured in Africa and Asia. Exports of one particular shark catfish species from Vietnam, Pangasius bocourti, has met with pressures from the U.S. catfish industry. In 2003, the U.S. Congress passed a law preventing the imported fish from being labeled as catfish.[27] As a result, the Vietnamese exporters of this fish now label their products sold in the U.S. as "basa fish."

There is a large and growing ornamental fish trade, with hundreds ofspecies of catfish, especially the genus Corydoras, being a popular component of many aquariums. These are commonly known as cory's. Other catfish commonly found in the aquarium trade are armored suckermouth catfish, banjo catfish, talking catfish, and long-whiskered catfish.

Walking catfish is an invasive species in Florida.

Representatives of the genus Ictalurus have been misguidedly introduced into European waters in the hope of obtaining a sporting and food resource. However, the European stock of American catfishes has not achieved the dimensions of these fishes in their native waters, and they have only increased the ecological pressure on native European fauna.

Walking catfish has been introduced in the freshwaters of Florida, with these voracious catfish becoming a major alien pest there.