James Augustus "Catfish" Hunter (April 8, 1946 – September 9, 1999), was a prolific Major League Baseball right-handed starting pitcher between 1965 and 1979. During his time in the big leagues, Hunter was known for his ability to rise up in tough situations, and for his amazing pin-point control. He retired from baseball with a 3.26 career ERA, 224 wins, and five world series titles. Hunter was a "big game" pitcher, best in the most pressure situations. He faced many great challenges in his life, and then in death. Hunter was stricken with amyotrophic lateral sclerosis (also known as Lou Gehrig's Disease after the great Yankee first baseman whose untimely demise brought attention to this debilitating disorder). He died outside Hertford, North Carolina, where he was born. He was only 53 years old at his death.

The son of Abbott and Millie Hunter, Jim was the youngest son of eight children. Hunter excelled in a variety of sports at Perquimans High School through his youth. He played as a linebacker and offensive end in football as well as a shortstop, cleanup hitter and pitcher in baseball. His pitching skill began to attract scouts from Major League Baseball teams to Hertford, North Carolina. In his senior year, Hunter was wounded in a hunting accident which led to the loss of one of his toes and the lodging of shotgun pellets in his foot. The accident left Hunter somewhat hobbled and jeopardized his prospects in the eyes of many professional scouts, however a 26-2 record along with five no-hitters throughout his high school career, showed the potential of the young pitcher. That potential was soon realized by the Kansas City Athletics, who signed Hunter to a contract.

The nickname Catfish came from Charles O. Finley, the Kansas City owner, when he was initially signed by the team for a mere $75,000. After missing the 1964 season due to surgery, Hunter's first major league victory came on July 27, 1965 in Fenway Park against the Boston Red Sox. From his first season until 1977, Catfish never missed a start, making him one of the most consistent, durable pitchers in all of baseball. In 1966 Hunter was named to the American League All-Star team and was named again in 1967. In 1968, Charles Finley moved the Athletics from Kansas City to Oakland, and on May 8 that year in a game against the Minnesota Twins, Hunter pitched the first perfect game in the American League since 1922. From 1971-1973, Hunter won 21 games, leading the American League in winning percentage in 1972 and 1973. He continued to win games and in 1974, receiving the Cy Young Award and was named Pitcher of the Year by The Sporting News. Hunter's statistics while he was with the Athletics were impressive: four consecutive years with at least 20 wins, four World Series wins with no losses and, in 1974, a league leading earned run average of 2.49. Catfish holds the Oakland all-time best in wins (161), starts (340), innings (2,456), shutouts (31), and strikeouts (1,520).

In 1975, Hunter was declared a free agent after his owner failed to pay his $50,00 life insurance fund. He soon signed with the New York Yankees for $3.5 million, making him the highest paid player in free agency at that time. Catfish didn't fail to impress in his first year with the club, going 23-14 (win/loss ratio), finishing the year tied for first in wins, and being named to the All-Star team for a seventh consecutive year. 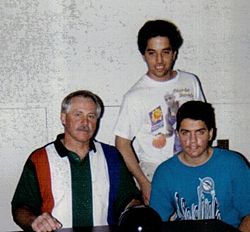 The Yankees won three straight pennants and two World Series championships with Hunter from 1976 to 1978. However, the years of arm strain and the effects of diabetes had begun to take a toll on the pitcher. In 1979 at the age of 33, Jim "Catfish" Hunter retired from baseball. Jim Hunter was an effective pitcher, not because he overpowered batters with his speed, but because of the precision of his pitching. His performance on the mound earned him a spot in the National Baseball Hall of Fame in 1987, where his plaque reads, "The bigger the game, the better he pitched." [1]

Catfish Hunter's success as a pitcher was mostly due to his amazing control on the mound. Perhaps because of his gun accident, he did not have a blazing fastball. But, he had a knack for finding the umpire's strike zone, using it to frustrate batters througout the game. His pitches looked very hittable, especially compared with some of the harding throwing pitchers. Nonetheless, he enjoyed great success with his guile and control. "Then you’d turn around the next night and get Catfish Hunter, who just defied guys. They’d shake their heads and couldn’t wait to get up … [They’d bat] the next time and they’d go back scratching their heads."[2] His control on the mound led to many wins, but because of the amount of strikes he threw, it also led to many home runs: "My brothers taught me to throw strikes, and thanks to that I gave up 400 homers in the big leagues," Catfish said after he retired.[3]

Jim "Catfish" Hunter died on (September 9, 1999) from complications with ALS (amyotrophic lateral sclerosis) otherwise known as Lou Gehrig's Disease. After retiring from the sport he dominated, Hunter retreated back to his home and lived in Hertford, North Carolina, spending most of his time enjoying the hobbies he missed out on while in the major leagues. "If I hadn't played baseball, I wanted to be a game warden or something. I want to be outdoors and I think down here is the best outdoor living you can get, for fishing or hunting, or whatever you want,"[4]said Hunter on his life after baseball.

Catfish will always be known for being a commanding pitcher. His World Series marks in five categories rank him among the top ten in history, and his amazing career had him inducted into the Baseball Hall of Hame in 1987. He will also be remembered for being very approachable, humble, and soft-spoken. Hunter had to overcome tough injuries to become a major leaguer, including his hunting accident while in high school. He will also be known as one of the most prestigoius pitchers in the history of the game, for being able to have amazing control of his pitches. While Hunter had the talent to throw the ball, his most important quality was how we rose up in tough situations, and never backed down from a big game situation.

Retrieved from https://www.newworldencyclopedia.org/p/index.php?title=Catfish_Hunter&oldid=979587
Categories:
Hidden category:
This page was last edited on 28 March 2014, at 14:30.
Content is available under Creative Commons Attribution/Share-Alike License; additional terms may apply. See Terms of Use for details.