The American League of Professional Baseball Clubs, or simply the American League (AL), is one of two leagues that make up Major League Baseball in the United States and Canada. It developed from the Western League, a minor league based in the Great Lakes states that was eventually elevated to major league status.

The league is often called the Junior Circuit because it was upgraded to Major League status in 1901, 25 years after the formation of the National League (the Senior Circuit). The American League champion plays in the World Series against the National League champion as the finale of every season. Through the 2007 season, American League teams have won 61 of the 103 World Series played since 1903.

The American League proved to be the perfect complement to the National League and together they were able to accomplish what many other dual league attempts had failed at, long term success.

A flurry of independent leagues attempted to rival the National League after it was formed in 1876; however, the majority of them failed. With the disappearance of the American Association after the 1891 baseball season, the NL expanded to become a twelve-team league. The NL remained the sole monopoly of major professional baseball for the duration of the century. 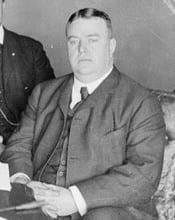 In 1894, with the support of Cincinnati Reds' manager Charles Comiskey and John T. Brush, the Reds' owner, Ban Johnson became president of the minor Western League. In 1896, he formulated a plan of expansion that would eventually see the Western League become the American League. Essentially, Johnson's plans and the life of the American League relied on the National League's decision to cut back from from twelve teams to eight. Johnson was determined that he would place new teams in the abandoned cities and thus take on the established league.

1900: The Rise of the American League

In 1900 the NL finally went through with its planned reduction, eliminating its teams in Baltimore, Maryland; Cleveland, Ohio; Louisville, Kentucky, and Washington, D.C..

The Western League renamed itself the American League on October 11, 1899, and placed teams in Cleveland and Chicago. This was done with the approval of the National League, which, at the time, did not recognize the move as a threat.

Despite these moves, the American League remained a minor league during the 1900 season. The league did not renew its National Agreement membership when it expired in October 1900, and on January 28, 1901, the American League officially declared itself a major league. This declaration was followed by a surge of relocations.

In the 1901 baseball season, for the first time in a decade, there were two major leagues. The American League opened for business in Milwaukee, Cleveland, Washington, Baltimore, Detroit, Philadelphia, Boston, and Chicago, with the latter three franchises competing with established National League teams in the same city.

At the time the National League was bitterly divided into two factions, one led by New York's Andrew Freedman and another by Chicagoan Al Spalding.

The war between the American and National Leagues resulted in a meeting at the Leland Hotel in Chicago on September 5, 1901. Patrick T. Powers, president of the Eastern League announced the formation of the second National Association of Professional Baseball Leagues, the NABPL or NA for short.

Many independent leagues walked away from the 1901 meeting. The deal with the NA punished those who had not joined the NA and submitted to the will of the 'majors'. The NA also agreed to prevent more pilfering of players with little or no compensation for the players' development. Several leagues, seeing the writing on the wall, eventually joined the NA, which grew in size over the next several years.

Stars such as these lent legitimacy to the American League, and fans came out in droves to see ex-Cardinal Cy Young win 33 games for Boston with a 1.63 ERA, as well as ex-Cub Clark Griffith, who crossed town to go 24-7 for the Chicago White Sox.[1]

The AL outdrew the NL in all three cities in which they both competed in 1901. The Milwaukee franchise moved to St. Louis for 1902 and, now competing in four cities, the AL once again outdrew the NL in head-to-head competition; overall attendance for the eight-team league was 2,228,000 in a 136-game schedule compared to the NL's 1,684,000.[2]

After the 1902 season the two leagues reached an agreement to cooperate with one another; the NL sought a merger, but Johnson knew he had the upper hand, and held out for full acceptance of the AL by the NL.

The revival of the two-league concept allowed the resumption of postseason play in 1903 with the inaugural World Series, won by the Boston Pilgrims over the Pirates, but when John McGraw's Giants won in 1904, he refused to play the Pilgrims. He did agree to meet Mack's Athletics in 1905, and the Series has continued uninterrupted ever since, as has the peace between the two leagues. 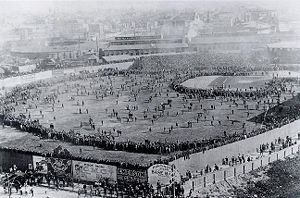 The profitable American League expanded its schedule to 154 games in 1904 and continued to attract young talent of superstar caliber. Ty Cobb, Shoeless Joe Jackson, Ed Walsh, Addie Joss, Tris Speaker, Walter Johnson, and most of all Babe Ruth brought the AL more publicity, and helped the junior circuit win twice as many World Series as the NL through 1918.

Ban Johnson continued as the autocrat of the American League until 1927, but his control over all of baseball slipped after the Black Sox Scandal led to the appointment of Kenesaw Mountain Landis to the new office of Commissioner of Baseball. The peace settlement back in 1903 had included the founding of the National Commission, a triumvirate composed of the AL and NL presidents and Cincinnati owner Garry Herrmann that decided disputes between clubs and between clubs and players. Johnson had been able to dominate this board, but met his match in Landis. Johnson resigned and Ernest S. Barnard became AL president, but he died in 1931 and was succeeded by Will Harridge, who lasted a record 28 years.[1]

The New York Yankees came to be the dominant American League team as they won 14 AL pennants between 1921 and 1943. The Yankees also won the World Series ten times in that period; four additional AL victories added to American League domination of the postseason. New York started a new streak from 1947 to 1964 when they won fifteen AL pennants and ten World Series, including a record five straight under manager Casey Stengel (1949-53).

The advent of television and other economic forces broke the half-century status quo in the 1950s, as some teams from both leagues began to transfer to other cities, and also led to the first major league expansion since the short-lived Federal League experiment of 1914-1915. The first AL franchise move in 50 years came when the St. Louis Browns moved to Baltimore for the 1954 season.

In 1961, the league expanded to ten teams, adding a franchise in Los Angeles and Washington, D.C., the latter replacing the departing Washington Senators franchise that had relocated to Minneapolis, to become the Minnesota Twins.

In 1969 the league expanded again, adding the Kansas City Royals and the Milwaukee Brewers, the former replacing the departed Athletics franchise in Kansas City. The Seattle Pilots only managed to survive one season before transferring to Milwaukee (just four days before the 1970 season started) where they became known as the Milwaukee Brewers. Also in 1969, the league, along with the National League, reorganized into two divisions of six teams (East and West, falling more along geographical lines than the NL's own realignment that year) and added a League Championship Series to determine the league participant in the World Series.

In 1973, the American League adopted the designated hitter rule, whereby a team may designate a tenth player to bat in place of the pitcher. This rule change was not adopted by the National League, which continued to require pitchers to bat for themselves, and led to special rules governing its use during interleague play such as the World Series.

Another big change came in 1977, when the AL expanded again (this time without corresponding expansion by the NL). The addition of the Toronto Blue Jays and Seattle Mariners gave the AL 14 teams. Interest in baseball boomed after the 1977 expansion.

In 1994, the league, along with the National League, reorganized into three divisions (East, Central and West) and added a second round to the playoffs in the form of the League Divisional Series, with the best second-place team advancing to the playoffs as a wild card team, in addition to the three divisional champions. Originally, the Milwaukee Brewers were in the Central division, but they left to join the National League in 1998, and the Tampa Bay Devil Rays joined the Eastern division, which kept the league's membership at 14 teams.

For the first 96 years, American League teams faced their National League opponents only in exhibition games or in the World Series. Beginning in 1997, interleague games have been played during the regular season and count in the standings. As part of the agreement instituting interleague play, the designated hitter is used only in games where the American League team is the home team.

In 1999, the two leagues were virtually dissolved as the league presidencies were abolished and merged under a single commissioner, Bud Selig.

Through the 2007 season, the New York Yankees have won the most American League pennants (39), followed by the Oakland Athletics (14), Boston Red Sox (12), and Detroit Tigers (10). Likewise, the Yankees have also won the most World Series (26), with the Athletics second with nine, the Red Sox third with seven and the Tigers fourth with four.

As of 2008 the American League had won seven of the last ten World Series, has won the interleague season series seven of eleven years, and had not lost an All-Star game to the National League in 11 years.

The American League will always be known for the legendary players it has produced, including Babe Ruth, Lou Gehrig, Joe DiMaggio, Mickey Mantle, Walter Johnson, Ty Cobb and many others.

Starting in 1901, the eight charter teams were the following:

(*) The Buffalo, Indianapolis, Kansas City and Minneapolis teams were replaced by teams in Baltimore, Boston, Philadelphia and Washington in 1901, but it is unclear and disputed as to which team went where. It is generally believed, however, that the Minneapolis Millers of 1900 became the Baltimore Orioles of 1901 and that the Kansas City Blues of 1900 became the Washington Senators of 1901.

The office was eliminated in 1999, although Jackie Autry, former owner of the Los Angeles Angels, currently holds the title of honorary American League president.

Retrieved from https://www.newworldencyclopedia.org/p/index.php?title=American_League&oldid=1052818
Categories:
Hidden category:
This page was last edited on 17 May 2021, at 14:43.
Content is available under Creative Commons Attribution/Share-Alike License; additional terms may apply. See Terms of Use for details.