Walter Perry Johnson (November 6, 1887 – December 10, 1946), nicknamed "The Big Train," was an American right-handed pitcher in Major League Baseball between 1907 and 1927. One of the most celebrated players in baseball history, he attained legendary status with his record achievements which remained unbroken for more than a half-century.

A six-foot, one-inch right-hander with long arms, Johnson threw his fastball, thought to be the fastest in the game, with a deceiving, sidearm motion. In 21 seasons with the Washington Senators, Johnson won 417 games—only Cy Young won more.

Johnson excelled in all pitching categories, such as in 1914 when he led the American League in wins, games, starts, complete games, innings, strikeouts, and shutouts. He eventually amassed 110 shutouts, the most ever. His 38 1-0 wins are, by far, an all-time record. Among Johnson’s other accomplishments were 16 straight wins (1912); a string of 56 scoreless innings, and a 36-7 (1.09 earned run average) mark in 1913; five wins, three of them shutouts, in nine days (1908); 200 victories in eight seasons; 300 victories in 14 seasons.

In addition to the remarkable talent Johnson demonstrated on the field, he was also known for his admirable character. Even in the most hotly contested games, he was mild, modest, decent, and friendly. The personification of the values that Americans respected, sportswriters of Johnson’s era referred to him as "Sir Walter" and the "White Knight."

When his exceptional career as a player ended, Johnson became a manager, first at Newark for a season, then at Washington, and finally at Cleveland. His .551 winning percentage was respectable, but Johnson was not considered aggressive enough to be a manager. He was among the select group admitted to the Baseball Hall of Fame when it first opened.

Walter Johnson was born on November 16, 1887, the second of six children to Swedish emigrant parents on a rural farm four miles west of Humboldt, Kansas. Before he reached his fourteenth birthday in 1901, his family moved to California's Orange County, where he attended Fullerton High School. In July 1907, while he was working for the local telephone company and pitching for Weiser, Idaho in the semi-pro Idaho State League, Johnson was spotted by a talent scout and, at the age of 19, signed a contract with the Washington Nationals (later Washington Senators, now Minnesota Twins).

Johnson won renown as the premier, power pitcher of his era. Although a lack of precision instruments prevented accurate measurement of his fastball, Johnson may well have thrown over 100 miles–per–hour from a sidearm angle. Such power is exceptional even today, but it was unique in Johnson's day.

The overpowering fastball was the primary reason for Johnson's exceptional statistics, especially his fabled strikeout totals. Johnson's record total of 3,509 strikeouts stood for more than 55 years until Nolan Ryan, Steve Carlton, and Gaylord Perry (in that order) all surpassed it in 1983. Johnson is now ninth on the all-time strikeout list, but his total must be understood in its proper context. Among his pre-World War II contemporaries, only two men were within a thousand strikeouts of Johnson: runner-up Cy Young with 2,803 (more than 800 behind) and Tim Keefe at 2,562. Bob Feller, whose war-shortened career began in 1936, later ended up with 2,581. 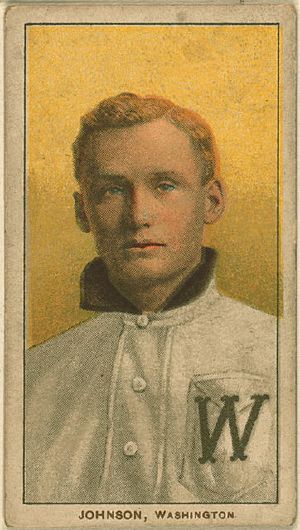 As a pitcher for the Washington Nationals/Senators, Walter Johnson won 417 games, the second most by any pitcher in history (after Cy Young, who won 511). He and Young are the only pitchers to have won 400 games or more.

Johnson thrice won the triple crown for pitchers (1913, 1918 and 1924). The Triple Crown of pitching is "awarded" to the pitcher who leads—or ties—his league in three, major pitching areas: one, wins; two, strikeouts; and three, earned run average. All three of those categories must be led, or tied, at the end of the season in order to be part of a Triple Crown performance.

Johnson twice won the American League Most Valuable Player Award (1913, 1924). This feat has been accomplished by only two other pitchers, Carl Hubbell in 1933 and 1936 and Hal Newhouser in 1944 and 1945. His earned run average of 1.14 in 1913 was one of the lowest of all time, and indeed held the post-1901 record (not counting Mordecai "Three Finger" Brown), though only for a year, as Dutch Leonard would break the record the next year.

That 1.14 ERA in 1913 would have been lower if not for one of manager Clark Griffith's traditions. For the last game of the season, Griffith often treated the fans to a farce game. Johnson actually played center field in that game until he was brought into pitch. He allowed two hits before he was taken out of the game. The next pitcher—who was normally a catcher—allowed both runners to score. Some record books still indicate that Johnson had a 1.09 ERA for 1913. The official scorekeeper ignored the game, but later, Johnson was charged with those two runs, raising his ERA.

Although he usually pitched for losing teams during his career, Johnson led the Washington Nationals/Senators to two World Series, in 1924 and 1925. The team split the series, and in 1924 it was Johnson who clinched the victory in the the final, 12-inning game.

Johnson was a better than average hitter for a pitcher, compiling a career batting average of .235, including a record .433 average in 1925. He also made 13 appearances in the outfield during his career. He hit over .200 in 13 of his 21 seasons, and actually hit 12 doubles and a triple in 130 at-bats in 1917. In a season where Johnson had 28 wins, he also had more home runs in 1914 than Ty Cobb, Honus Wagner, or Napoleon Lajoie, all Hall of Fame hitters.

In 1928, Johnson began his career as a manager in the minor leagues, taking up residence at 32 Maple Terrace, Millburn, New Jersey, and managing the Newark team of the International League. He continued on to the major leagues, managing the Washington Nationals/Senators (1929-1932), and finally the Cleveland Indians (1933-1935). Johnson also served as a radio announcer for the Senators during the 1939 season.

One of the first five players elected to the Baseball Hall of Fame in 1936, Johnson retired to Germantown, Maryland and was elected Montgomery County commissioner in 1938. In 1940, he received the Republican nomination for U.S. Congress from Maryland's sixth congressional district, subsequently losing to Democrat William D. Byron by a 60,037 to 52,258 vote margin.

In the remaining six years of his life, Walter Johnson gave his full efforts to patriotic public appearances at war bond rallies. He died of a brain tumor in Washington, D.C. on December 10, 1946, five weeks after his fifty-ninth birthday, and was interred in Rockville, Maryland's Rockville Union Cemetery.

Walter Johnson High School in Bethesda, Maryland has been named for him. The monument to him that once stood outside Griffith Stadium has been moved to the school's campus.

He earned the nicknames of "Sir Walter" and "the White Knight" because of his gentlemanly gamesmanship. In 1985, the rock musician Jonathan Richman recorded a song entitled "Walter Johnson" that celebrated Johnson's kindness.

In 1999, he ranked number four on The Sporting News' list of the 100 Greatest Baseball Players, the highest-ranked pitcher. Later that year, he was elected to the Major League Baseball All-Century Team.

Johnson's gentle nature was legendary, and to this day he is held up as an example of good sportsmanship while his name has become synonymous with friendly competition.

Johnson was immortalized in the poem "Lineup for Yesterday," by Ogden Nash, thus:

J is for Johnson.
The Big Train in his prime,
So fast he could throw
Three strikes at a time.