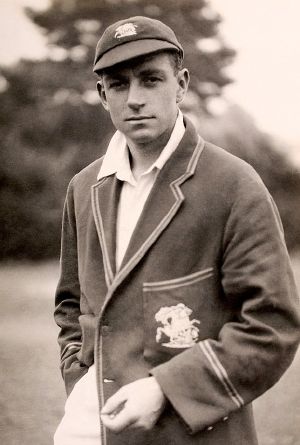 Walter Reginald "Wally" Hammond (born June 19, 1903 in Dover, Kent, died July 1, 1965 in Kloof, KwaZulu-Natal, South Africa) was an famous English cricketer, and former team captain who played for Gloucestershire and England, primarily as a batsman. Hammond was known for his athletic talent and is regarded as one of the best batsmen in the history of the sport.

Although Hammond was born in Dover, he spent some of his early life in Malta, losing his father in World War I. He first appeared for Gloucestershire, where he had attended school in Cirencester, in 1920. Lord Harris, annoyed that he would not join Kent, objected to his qualification, delaying Hammond's full time entry into the county game for two years until 1923.

Early Years on the Caribbean Tour

Hammond played in 10 first-class matches between 1920 and 1922 for Bristol Rovers, scoring 117 runs at a average of 7.80. Over the next three years, he started to increase his scoring as he gained experience as he scored in the low thirties and also scored six centuries (the term for scoring 100), with the last being a watershed. On August 19, 1925 against the Austrialian great, Ted Mcdonald, Hammond batted for a total of five and a half hours scoring a 250. The young Hammond was in contention for a test place, and when the committee fielding a MCC team was picking their players, they gave Hammond an invitation. A test match is an official two-inning contest against two national teams that is usually spread over five days of play.

Hammond missed the 1926 season due to syphilis, which made him very ill and almost took his life. At the time of his absence, his sickness was blamed on a mosquito bite, and the subject of Hammond became the center of many rumors and cricket gossip. In David Foot's book on the player's life, it is explained that the illness had a dramatic effect on the player's character. In the 1927 season, Hammond had a more reserved, bitter, tough demeanor, leading to him scoring 1000 runs in the month of May, and 2969 runs for the first class season with 12 hundreds.

With the big season under his belt, Hammond was chosen to play for the MCC team in South Africa. During his time with the tour he took 0-21 and 5-36, and in his test debut, scored 51. He went on to score two more 50s and also opened bowling during the series, leading to him coming home to score two more 50s against the team from the West Indies.

After his earlier performance, he went on to play in the Ashes tour and scored 432 runs in eight tests, at a average of 39.27. Even though Australian fans were concerned with the line up the English brought, they had no idea the English would hit them as hard as they did. Hammond approached the series with the Australians with extreme confidence. He felt that because the Aussies always played tests to a finish, he could cash in and show his potential. After a century in Adelaide, a double-century in Sydney in a lead up to the first test, the potential turned to success for Hammond. In the opening of the series, England won by an amazing 675 runs, with Hammond having a double failure.

After the batting performance Hammond had against Adelaide before the tests, he said, "He nonchalantly lifted the ball over the head of mid-off for four, a stroke I thought had gone the way of top hats, mustaches and the five-ball over. He was a carefree, brilliant stroke player that day, the Hammond he wished to be."[1]

He was also one of the best slip fielders the game has seen. He took a record ten catches in a county match in 1928, the season in which he set the season record of 78 catches. He was a more than useful right-arm medium-fast bowler. At his best, in his youth, he had been positively fast but, as Sir Donald Bradman once remarked, "was too busy scoring runs to worry about bowling." He was not a man to rile on the field of play, however. A bouncer barrage by Essex against his team mates brought a hostile response from their champion. "I never saw a man bowl faster for Gloucestershire than Wally did that day," said Tom Goddard, "and he not only battered them, he bowled them out as well."[2]

Hammond's Swing and the change he made 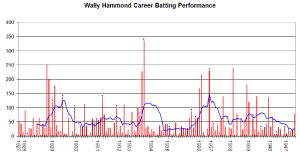 While he was primarily a front foot batsman, an immensely strong and athletic physique gave him immense power off either foot. Classical in his batting style, he was strong in the drive and noted for his straight bat in defense. The power of his driving was remarked on by all his contemporaries, in particular its timing and strength. While his swing had tremendous power, it was also picture perfect because of its effortless nature and the style. Early in his career he played quite freely off the back foot but in Australia in 1928-29, under Percy Chapman, decided to eschew the hook shot to reduce the risk of dismissal. Hammond's cautious strategy brought him 905 runs at 113.12, an aggregate beaten later only by Don Bradman. His test performances had no effect on his productivity at country level. He was the leading Englishman in the batting averages for eight successive cricket seasons, from 1933-1946, and topped 3,000 runs in a season three times in his career.

Hammond continued to show off his amazing talent over the seasons, but a large milestone for the athlete came when he became a notional amateur in 1938 to allow him to captain England, a position barred to professionals before Len Hutton took charge. His aristocratic bearing may have held him in good stead, but he won only 4 of his 20 matches in charge. He also captained both Gentlemen and Players, the only cricketer to have done so.

Hammond returned to cricket after the war, showing his incredible swing at the age of 43 when he topped the first class averages with 1,783 runs at 84.90, making him an automatic choice to tour Australia for the fourth time, this time as captain. Although Hammond's form extended into the early part of the tour, which saw his thirty-sixth double century, against Western Australia, it was soon clear that England had no hope of regaining the Ashes. After two outstanding innings on a dreadful wicket (the strip of playing field) at Brisbane in the First Test, which England lost by an inning, Hammond was outperformed by Bradman and struggled for runs in the later Tests. The 1946-1947 tour was not one to remember for Hammond who had bad arthritis, several personal problems, and the extra pressure of being captain. A sparkling 79 in the tour's last Test match, against New Zealand, showed flashes of the old brilliance. Suffering from the arthritis and worn down by personal strife, he retired on his return and took up occasional cricket commentary.

Hammond only played two more first-class games, for MCC in 1950 and Gloucestershire in 1951. Hammond emigrated to South Africa, where he lived in sometimes unhappy circumstances, and, after a serious car crash sapped much of his remaining strength, died in Durban in 1965 at age 62.

Hammond is remembered as being one of the best batsment to ever play the game, and for bringing incredible excitement to wherever he played. Hammond went virtually un-coached before 1928, and although lacked instruction, was incredibly athletic allowing him still perform at a high level. His Test batting average of 58.45, over an epic twenty years and 85 tests, presently stands eighth in the all-time list. Hammond's 336 not out against New Zealand in 1933 was the highest Test innings score, until it was passed by Len Hutton's 364 against Australia five years later.

Template:English batsman with a Test batting average over 50

Retrieved from https://www.newworldencyclopedia.org/p/index.php?title=Walter_Hammond&oldid=1088222
Categories:
Hidden category:
This page was last edited on 18 November 2022, at 21:40.
Content is available under Creative Commons Attribution/Share-Alike License; additional terms may apply. See Terms of Use for details.