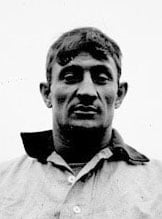 Johannes Peter Wagner (February 24, 1874 – December 6, 1955), nicknamed "Honus" and "The Flying Dutchman," is considered one of the greatest players in the history of major league baseball. One of the first true athletic stars of the twentieth century, Wagner began his career in 1897. From 1900 until he retired in 1917 he amassed more hits (2,967), extra-base hits (865), and runs (1,521) than any player to date. By his example both off and on the field, he won the respect and admiration of Americans at a time when many were deeply prejudiced against individuals of German backgrounds.

Besides being a fearsome hitter, he was a skilled base stealer and expert fielder. Many analysts consider him the most accomplished, versatile shortstop in history. As one of just five inductees into the first class (1936) of the Baseball Hall of Fame, the debate continues as to whether Honus Wagner might be the best baseball player of all time.

Honus Wagner was born on February 24, 1874, to Bavarian immigrants Peter and Katheryn Wagner, in the Pittsburgh neighborhood of Mansfield, today known as Carnegie, Pennsylvania. He was one of nine children, only five of whom lived past childhood. As a child, he was called Hans by his mother, which would later evolve into Honus. "Hans" was also an alternate nickname during his major league career.

Wagner dropped out of school at age 12 to help his father and brothers in the coal mines. In their free time, he and his brothers played sandlot baseball and developed their skills to such an extent that three of his brothers would go on to be professionals as well. Wagner's older brother, Albert Wagner, is often credited for getting Honus his first tryout. 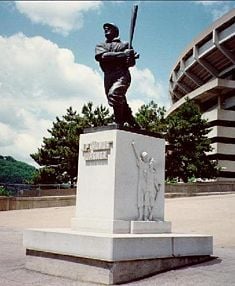 Wagner statue at the Three Rivers Stadium in Pittsburgh.

In a career that spanned 21 seasons (1897-1917), he led the National League in batting average eight times. He also led the league in runs batted in (RBI) and stolen bases five times each.

Wagner's speed, both on the base paths and in the field, combined with his considerable size (5-11, 195 lbs., unusually large for an infielder of his era), earned him the nickname "The Flying Dutchman"—a reference to the opera by German composer Richard Wagner about a legendary "ghost ship" of the same name. In those very much ethnic-aware days, the term "Dutch" equated to "German," and the newspapers frequently tagged Wagner with Teutonic versions of his first name, such as "Hans" or "Hannes," the latter being short for "Johannes," and often written down as "Honus." Although none could doubt Wagner's skills, these monikers were not necessarily meant to be friendly.

Wagner was discovered at 18, when baseball scout Ed Barrow went to a coal mine to scout Honus' brother, Albert Wagner, and saw Honus tossing rocks long distances. As a result, Barrow signed Honus on the spot, along with his brother Al.

After a short stint in the minor leagues starting in 1895, Wagner began his major-league career with the Louisville Colonels of the National League, playing with them for three seasons. Wagner had a bulky, barrel-chested appearance and ran with a bowlegged gait, but was nonetheless extremely fast and powerful. He was consistently among the league leaders in stolen bases and in most batting categories, including triples and home runs (in an era when over-the-fence "homers" were rare.)

In the early phase of his career, Wagner played nearly every position, starting at third base, then seeing action in the outfield and first base before his managers finally settled upon shortstop as his most valuable position. Defensively, he would scoop up ground balls with his huge hands (over sized gloves were not yet used), often firing handfuls of gravel as well as the ball across the infield with his powerful throws.

Louisville was one of four National League teams contracted out of existence in 1900, and the remnant of the Louisville team was merged with the Pittsburgh Pirates, catapulting the team into contention, including participation in the first World Series in 1903. After the 1899-1900 merger, Wagner played 18 more seasons, all with the Pirates, winning a World Series title with them in 1909. 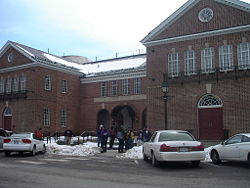 Wagner was among the first five players inducted into the Baseball Hall of Fame.

His broad range of skills earned him the high praise of his peers, and in 1936 he was among the first five individuals ever inducted to membership in the Baseball Hall of Fame, in the select company of Ty Cobb, Walter Johnson, Christy Mathewson, and Babe Ruth. He won the National League batting title eight times, and retired from baseball in 1917 as the National League record holder in career hits, doubles, triples, runs, runs batted in, stolen bases, and games played.

His lifetime batting average was .327. In 1999, even though he had played his last game 82 years earlier, he was elected to the Major League Baseball All-Century Team, as one of three shortstops, with Ernie Banks and Cal Ripken, Jr. The same year, The Sporting News placed him at number 13—and the highest-ranking shortstop—on their list of the 100 Greatest Baseball Players. Wagner was rated as the second greatest baseball player of all time in the "Bill James Historical Baseball Abstract." As of this writing, he ranks sixth on the all-time list for most base hits.

Famous baseball manager (and Wagner's contemporary) John McGraw spoke for many when he said of Wagner that "while he was the greatest shortstop, I believe he could have been the number one player at any position he might have selected. That's why I vote him baseball's foremost all-time player." Similarly, in his section of the book, The Glory of Their Times, Ty Cobb's teammate Sam Crawford rated Wagner, not Cobb, the best player he ever saw.

In a 2006 commercial for the MLB, advertising Hometown Heroes, Wagner, along with Ozzie Smith, Cal Ripken Jr., and Babe Ruth, state their reasons for being considered "Hometown Heroes." Wagner's voice says "In my day, we didn't have bases, we had rocks," an inside joke about the fact he played in the early days of baseball, and the fact that he was originally discovered "tossing rocks."

Wagner served as the Pirates' manager briefly in 1917, but resigned the position after only five games. He returned to the Pirates as a coach, most notably as a hitting instructor from 1933 to 1952. Future Hall of Famers Arky Vaughan, Kiki Cuyler, Ralph Kiner and player/manager from 1934-1939, Pie Traynor were notable "pupils" of Wagner.

During this time, Wagner initially wore uniform number 14, but later changed it to his more famous 33, which was later retired for him. (His entire playing career was in the days before uniform numbers were worn.) Wagner lived out the remainder of his life in Pittsburgh, where he was well-known as a friendly figure around town. He died on December 6, 1955, at the age of eighty-one, and is buried at Jefferson Memorial Cemetery in the South Hills area of Pittsburgh.

A life-size statue of Wagner, swinging the bat, atop a marble pedestal featuring admiring children, was forged by a local sculptor name Frank Vittor, and placed outside the left field corner gate at Forbes Field. It was dedicated on April 30, 1955, and the then-frail Wagner was well enough to attend and wave to his many fans. The Pirates have relocated twice since then, and the statue has come along with them. It now stands outside the main gate of PNC Park. As that park is near the site of the Pirates' original home, Exposition Park, in a sense Wagner has come full circle.

The T206 Honus Wagner card has long been the most famous baseball card in existence. Known as the "Holy Grail," the "Mona Lisa of baseball cards," and "The King of Cards," an example of this card was the first baseball card to be sold for over a million dollars. That card was once owned by hockey great Wayne Gretzky. One theory for the card's scarcity is that Wagner, a non-smoker, requested the production of this card be halted since it was being sold as a marketing vehicle for tobacco products. This theory, however, is criticized on the basis that Wagner appears on a tobacco piece produced by Recius in the late 1800s. Another theory postulates that Wagner was not offered any compensation for the use of his likeness. Consequently, he supposedly withdrew his permission to print any more copies.[1]

Retrieved from https://www.newworldencyclopedia.org/p/index.php?title=Honus_Wagner&oldid=1008766
Categories:
Hidden category:
This page was last edited on 13 January 2018, at 23:49.
Content is available under Creative Commons Attribution/Share-Alike License; additional terms may apply. See Terms of Use for details.