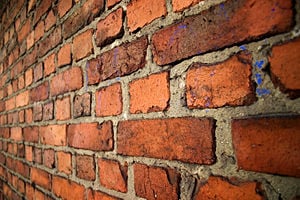 An old brick wall in "English bond," laid with alternating courses of headers and stretchers

Brick is an artificial stone made by forming clay into rectangular blocks which are hardened, either by burning in a kiln or sometimes, in warm countries, by sun-drying. 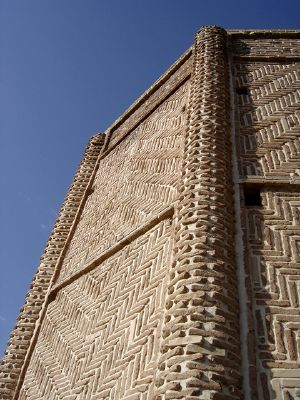 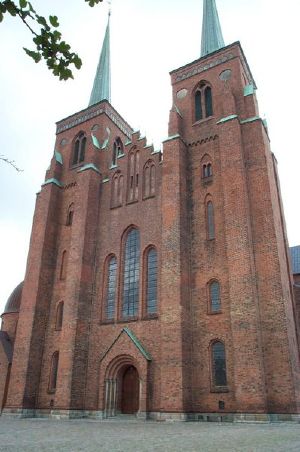 In the Near East and India, bricks have been in use for more than five thousand years. The Tigris-Euphrates plain lacks rocks and trees. Sumerian structures were thus built of plano-convex mudbricks, not fixed with mortar or cement. As plano-convex bricks (being rounded) are somewhat unstable in behavior, Sumerian bricklayers would lay a row of bricks perpendicular to the rest every few rows. They would fill the gaps with bitumen, straw, marsh reeds, and weeds.

The ancient Egyptians and the Indus Valley Civilization also used mudbrick extensively, as can be seen in the ruins of Buhen, Mohenjo-daro, and Harappa, for example. In the Indus Valley Civilization, all bricks corresponded to sizes in a perfect ratio of 4:2:1, and made use of the decimal system. The ratio for brick dimensions 4:2:1 is even today considered optimal for effective bonding.

The ancient Romans made use of fired bricks, and the Roman legions, which operated mobile kilns, introduced bricks to many parts of the empire. Roman bricks are often stamped with the mark of the legion that supervised its production. The use of bricks in Southern and Western Germany, for example, can be traced back to traditions already described by the Roman architect Vitruvius.

In the twelfth century, bricks from northern Italy were reintroduced to northern Germany, where an independent tradition evolved. It culminated in the so-called brick Gothic, a reduced style of Gothic architecture that flourished in Northern Europe, especially in the regions around the Baltic Sea which are without natural rock resources. Gothic buildings, which are built almost exclusively of bricks, are to be found in Denmark, Germany, Poland, and Russia. However, bricks were long considered an inferior substitute for natural rock.

The transport in bulk of building materials such as bricks over long distances was rare before the age of canals, railways, roads and heavy goods vehicles. Before this time, bricks were generally made as close as possible to their point of intended use.

The use of brick in construction was not limited solely to regions that lacked stone or other materials suitable for building. Bricks were often used even in areas where stone was available, for reasons of speed and economy. During the building boom of the nineteenth century in the eastern seaboard region of the United States, locally made bricks were often used in construction (in Boston and New York, for example) in preference to the brownstones of New Jersey and Connecticut for these reasons. The Chrysler Building in New York is still the tallest brick building in the world. However, bricks were also used in regions that lacked stone and other materials suitable for building, including, for example, much of southeastern England and the Netherlands—places lacking easily-worked stone but having access to clays suitable for brickmaking and fuel for firing. 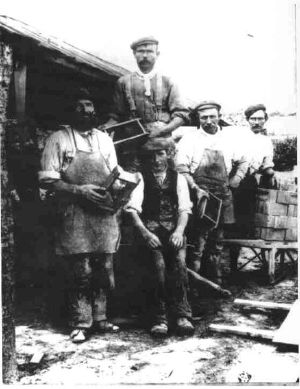 Brickmaking at the beginning of the twentieth century

Clay bricks are formed in a mold (the soft-mud method), or more frequently in commercial mass production by extruding clay through a die and then wire-cutting them to the desired size (the stiff-mud process). Brick made from dampened clay must be formed in molds with a great deal of pressure, usually applied by a hydraulic press. These bricks are known as hydraulic-pressed bricks, and have a dense surface which makes them highly resistant to weathering, and thus suitable for facing work. The shaped clay is then dried and fired to achieve strength. In modern brickworks, this is usually done in a continuously fired kiln, in which the bricks move slowly through the kiln on conveyors, rails, or kiln cars to achieve consistent physical characteristics for all bricks.

An impervious and ornamental surface may be laid on brick either by salt glazing, in which salt is added during the burning process, or by the use of a "slip," which is a glaze material into which the bricks are dipped. Subsequent reheating in the kiln fuses the slip into a glazed surface integral with the brick base.

For efficient handling and laying bricks must be small enough and light enough to be picked up by the bricklayer using one hand (leaving the other hand free for the trowel). Bricks are usually laid flat and as a result the effective limit on the width of a brick is set by the distance which can conveniently be spanned between the thumb and fingers of one hand, normally about four inches (about 100 millimeters). In most cases, the length of a brick is about twice its width, about eight inches (about 200 millimeters). This allows bricks to be laid bonded in a structure to increase its stability and strength (for an example of this, see the illustration of bricks laid in English bond, at the head of this article. The wall is built using alternating courses of stretchers, bricks laid longways and headers, bricks laid crossways. The headers tie the wall together over its width.

The compressive strength of bricks produced in the United States ranges from about 1,000 lbf/in² to 15,000 lbf/in² (7 to 105 megapascals), varying according to the intended uses for the bricks.

Adobe is a natural building material composed of sand, sandy clay, and straw or other organic materials, which are combined and shaped into bricks using wooden frames and dried in the sun. It is similar to cob and mudbrick. Adobe structures are extremely durable and account for the oldest extant buildings on the planet. Adobe buildings also offer significant advantages in hot, dry climates—they remain cooler because adobe stores and releases heat very slowly. 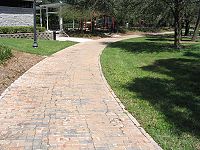 Bricks are used for buildings and pavement. In the United States, brick pavement was found incapable of withstanding heavy traffic, but it is coming back into use as a method of traffic calming or as a decorative surface in pedestrian precincts.

Bricks are also used in the metallurgy and glass industries for lining furnaces. They have various uses, especially refractory (heat-resistant) bricks such as silica, magnesia, chamotte, and neutral (chromomagnesite) refractory bricks. This type of brick must have good thermal shock resistance, refractoriness under load, high melting point, and satisfactory porosity. There is a large refractory brick industry, especially in the United Kingdom, Japan, and the United States.

In the United Kingdom, bricks have been used in construction for centuries. Until recently, many houses were built almost entirely from red bricks. This use is particularly prevalent in areas of northern England and some outskirts of London, where rows of terraced houses were rapidly and cheaply built to house local workers. These houses have survived to the present day, but some are in need of attention as their structure has deteriorated. Although many houses in the UK are now built using a mixture of cinder blocks and other materials, many are skinned with a layer of bricks on the outside for aesthetic appeal.