The Chrysler Building is an iconic Art Deco skyscraper in New York City, located on the east side of Manhattan at the intersection of 42nd Street and Lexington Avenue. Standing 1,047 feet high, it was briefly the world's tallest building in 1930, before it was overtaken by the Empire State Building in 1931. Since the destruction of the World Trade Center in 2001, it is currently the second tallest building in New York.

Featuring automobile-related designs around its facade, the Chrysler Building was built in homage to the success of the auto giant for which it is named. The gleaming, Art Deco masterpiece on New York City's East Side, with its stainless chromium-nickel steel arches and narrow triangular windows, was a constant optimistic reminder of the possibilities inherent in the capitalist system. Although the Chrysler Building soon fell to the number-two spot on the New York skyline, the spirit and excesses of the period are forever frozen in its shiny surfaces, statement-making spire, and remarkably bold design.

More than simply a structure, and an architecturally magnificent one at that, the Chrysler Building is a window into a short, vital, and exciting period in American history.

The Chrysler Building was built at a cost of $20 million and relied heavily on steel with brick facing to achieve its 77 stories at 1,047 feet. In what many historians consider to be the most challenging race in the annals of skyscraper construction, automobile tycoon Walter Chrysler fought the Wall Street giant, Bank of Manhattan Trust Company, for the right to be called the "world's tallest building."

The engineering firm who ran the effort, known then as the "race for the sky" over Manhattan in the summer of 1929, was Ralph Squire & Sons. The skyscraper was designed by architect William Van Alen and was originally built to house the Chrysler Corporation. The groundbreaking occurred on September 19, 1928. At the time, the builders of New York were engaged in an intense competition to build the world's tallest skyscraper. The Chrysler Building was erected at an average rate of four floors per week, and no workers were killed during construction. Just prior to its completion, the building stood about even with the rival project 40 Wall Street, designed by H. Craig Severance. Severance quickly increased the height of his project by two feet and claimed the title of the world's tallest building.[1] 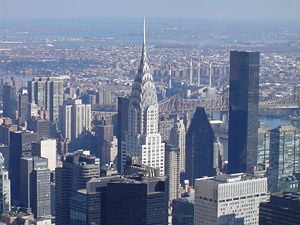 The Chrysler Building and surrounding structures, seen from the Empire State Building.

Van Alen, however, had secretly obtained permission to build a spire that was hidden inside the building during construction. The spire, measuring 125 feet long and composed of Nirosta stainless steel, was hoisted to the top of the building on October 23, 1929. The added height allowed the Chrysler Building to surpass both 40 Wall Street and the Eiffel Tower as the tallest building and the tallest structure in the world. It was also the first man-made structure to stand taller than 1,000 feet. The steel chosen to cap the building was Krupp KA2 "Enduro" Steel. The building opened to the public on May 27, 1930. In less than a year, the Chrysler Building was surpassed in height by the Empire State Building. Walter Chrysler never paid Van Alen for his work on the Chrysler Building because he believed that the architect had some suspicious financial arrangements with the building's contractors.

In its day, the Chrysler Building was considered a huge undertaking. More than 750 miles of electrical conductor wire were employed in its construction, as long as the distance from New York City to Chicago. Further materials included: 20,961 tons of structural steel; 391,881 rivets; 3,826,000 bricks; 10,000 light bulbs; and 3,862 windows.

The building was renovated in 1978-1979, during which the entrance hall was constructed in granite, marble, and steel. The spire underwent a restoration that was completed in 1995. The building is presently co-owned by TMW Real Estate, with three-quarters of the ownership, and Tishman Speyer Properties, with the remaining one-quarter of ownership. 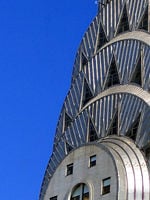 Detail of the Art Deco ornamentation at the crown

Illumination of the building at dusk.

Walter Chrysler was not content to have just the tallest building on earth. He also desired "a bold structure, declaring the glories of the modern age." He created one of world's most decorated buildings, featuring hubcaps, mudguards, and hood ornaments echoing those on his famous line of automobiles. Chrysler's goal was to spread the name of his car company far and wide through his eye-catching structure.

Today, rather than being considered for its automotive details, the Chrysler Building is recognized as New York City's foremost example of Art Deco, a highly decorative style known for its sharp angular or zigzag surface forms and varied ornamentation. The corners of the sixty-first floor are graced with eagles, replicas of the 1929 Chrysler hood ornaments. On the thirty-first floor, the corner ornamentation are replicas of the 1929 Chrysler radiator caps.[2] The building is constructed of masonry, with a steel frame, and metal cladding.

The lobby is similarly elegant. When the building first opened it contained a public viewing gallery near the top, which a few years later was changed into a restaurant, but neither of these enterprises was able to be financially self sustaining during the Great Depression and the former observation floor became a private dining room called the Cloud Club. The very top stories of the building are narrow with low-sloped ceilings, designed mostly for exterior appearance with interiors useful only to hold radio broadcasting and other mechanical and electrical equipment.

There are two sets of lighting in the top spires and decoration. The first are the V-shaped lighting inserts in the steel of the building itself. Added later were groups of floodlights which are on mast arms directed back at the building. This allows the top of the building to be lit in many colors for special occasions. This lighting was installed by electrician Charles Londner and crew during construction.

In more recent years the Chrysler Building has continued to be a favorite among New Yorkers. In the summer of 2005, New York's own Skyscraper Museum asked one hundred architects, builders, critics, engineers, historians, and scholars, among others, to choose their ten favorites among 25 New York towers. In an American Institute of Architects' poll, the Chrysler Building came in first place as 90 percent of them placed the building in their top ten favorite buildings.

The Chrysler Building's distinctive profile has inspired similar skyscrapers worldwide, including One Liberty Place in Philadelphia. 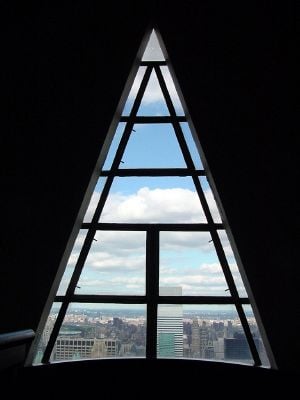 View from one of the north-facing triangular windows

"Art Deco in France found its American equivalent in the design of the New York skyscrapers of the 1920s. The Chrysler Building...was one of the most accomplished essays in the style."

—John Julius Norwich, in The World Atlas of Architecture

"The Chrysler Building... one of the first uses of stainless steel over a large, exposed building surface. The decorative treatment of the masonry walls below changes with every set-back and includes story-high, basket-weave designs, radiator-cap gargoyles, and a band of abstract automobiles. The lobby is a modernistic composition of African marble and chrome steel."