The Eiffel Tower is an iron tower built on the Champ de Mars beside the River Seine in Paris. It is the tallest structure in Paris and among the most recognized symbols in the world. The structure was built between 1887 and 1889 as the entrance arch for the Exposition Universelle, a World's Fair marking the centennial celebration of the French Revolution. The tower was inaugurated on March 31, 1889, and opened on May 6. The tower is constructed of 18,038 pieces of wrought iron held together with three and a half million rivets. Because of this design, the risk of accident was great, for unlike modern skyscrapers the tower is an open frame without any intermediate floors except the two platforms. Yet because Eiffel took safety precautions including use of movable stagings, guard-rails and screens, only one man died, during the installation of its elevators.

Named after its designer, engineer Gustave Eiffel, it is a premier tourist destination. On the Eiffel Tower, seventy two names of French scientists, engineers and some other notable people are engraved in recognition of their contributions by Gustave Eiffel. This engraving was painted over at the beginning of the twentieth century and restored in 1986-1987 by Société Nouvelle d'exploitation de la Tour Eiffel, a company contracted to operate business related to the Tower. The Tower is owned by the city of Paris. 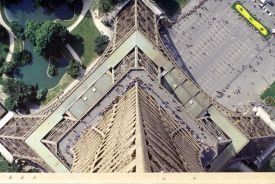 Looking down from the top observation deck.

The Eiffel Tower stretches approximately 300 m (1000 ft) high. Including the 20.75 m (70 ft) antenna, the structure is 320.75 m (1070 ft) high, which is about 81 stories. Completed in 1889, the tower replaced the Washington Monument as the tallest structure in the world, a title it retained until 1930, when New York City's Chrysler Building (319 m/1063.33 ft tall) was completed (although the tower was still taller if the respective spires of the two structures were excluded). In 1902, it was struck by lightning, which caused builders to reconstruct 300 feet of the top later in 1902-1903. The lights illuminating the tower also had to be replaced, due to short-circuiting.

The iron structure of the Eiffel Tower weighs 7,300 tons, and the total weight is 10,100 tons. The number of steps to the summit has varied through various renovations: At the time of construction in 1889, there were 1710 steps to the summit platform at 300.65 m; after renovation in the early 1980s, there were 1920 steps; and today there are 1665 steps (although it is not possible for the public to reach the summit via the stairs—elevators are required beyond the second platform).

Depending on the ambient temperature, the top of the tower may shift away from the sun by up to 8 cm (3.25 inches), due to expansion of the metal on the side facing the sun.

Maintenance of the tower includes applying 50/60 tons of three graded tones of paint every seven years to protect it from rust. However, few people realize that the tower is actually painted three different colors in order to make it look the same color. The colors change from dark to light from top to bottom, but it looks the same because of the background (the sky being light and the ground being dark). On the first floor, there are interactive consoles hosting a poll for the color to use for a future session of painting. 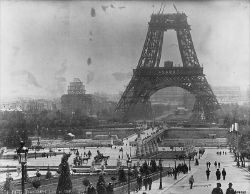 Eiffel Tower under construction in July 1888.

The tower was met with resistance from the public when it was built, with many calling it an eyesore (Novelist Guy de Maupassant ate at a restaurant at the tower regularly, because it was the one place in Paris he was sure he wouldn't see it). Today, it is widely considered to be a striking piece of structural art.

One of the great Hollywood movie clichés is that the view from a Parisian window always includes the tower. In reality, since zoning restrictions limit the height of most buildings in Paris to a few stories, only the very few taller buildings have a clear view of the tower.

Originally, Eiffel had a permit for the tower to stand for 20 years (meaning it would have had to be dismantled in 1909, when its ownership would revert to the City of Paris, which had originally planned to tear it down; part of the original contest rules for designing a tower was that it could be easily torn down). As the tower later proved valuable for communication purposes, it was allowed to remain after the expiry of the permit. The military used it to dispatch Parisian taxis to the front line of the Marne, and it therefore became a victory statue of that battle. It was also used to catch the infamous "Mata Hari," and after this, its demolition became unthinkable to the French population. Since the beginning of the twentieth century, the tower has been used for radio transmission. Until the 1950s, an occasionally modified set of antenna wires ran from the summit to anchors on the Avenue de Suffren and Champ de Mars. They were connected to long-wave transmitters in small bunkers; in 1909, a permanent underground radio center was built near the south pillar and still exists today. During the German occupation of Paris between 1940 and 1944 the tower was also used for German television broadcasts, which were apparently intended mostly for wounded German soldiers in local military hospitals. Since 1957, the tower has been used for transmission of FM radio and television.

Father Theodor Wulf in 1910 took observations of radiant energy radiating at the top and bottom of the tower, discovering at the top more than was expected, and thereby detecting what are today known as cosmic rays.

In 1925, the con artist Victor Lustig twice "sold" the tower for scrap.

In 1930, the tower lost the title of the world's tallest structure when the Chrysler Building was completed in New York City.

From 1925 to 1934, illuminated signs for Citroën adorned three of the tower's four sides, making it the tallest billboard in the world at the time.

Upon the Nazi occupation of Paris in 1940, the lift cables were cut by the French and the tower was closed to the public. The parts to repair them were allegedly impossible to obtain because of the war, though they were working again within hours of the departure of the Nazis. Soldiers had to climb all the way to the top to hoist the swastika from the top, but the flag was so large it blew away just a few hours later, and they had to go back up again with a smaller one. Hitler chose to stay on the ground. A Frenchman scaled the tower during the German occupation to hang the French flag. In August 1944, when the Allies were nearing Paris, Hitler ordered General Dietrich von Choltitz, the military governor of Paris, to demolish the tower along with the rest of the city. He disobeyed the order.

In 1959 the present radio antenna was added to the top.

In the 1980s, an old restaurant and its supporting iron scaffolding midway up the tower was dismantled; it was purchased and reconstructed in New Orleans, Louisiana, originally as the Tour Eiffel Restaurant, known more recently as the Red Room.

In 2000, flashing lights and four high-power searchlights were installed on the tower. Since then the light show has become a nightly event. The searchlights on top of the tower make it a beacon in Paris' night sky.

At 7:20 p.m. on July 22, 2003, a fire occurred at the top of the tower in the broadcasting equipment room. The entire tower was evacuated; the fire was extinguished after 40 minutes, and there were no reports of injuries.

Since 2004, the Eiffel Tower has hosted an ice skating rink on the first floor during the winter period. Skating is free and it offers a terrific view of southern Paris.