The Empire State Building is a 102-story Art Deco skyscraper in New York City. Its name is derived from the nickname for the state of New York. It stood as the world's tallest building for more than 40 years, from its completion in 1931 until the construction of the World Trade Center North Tower in 1972.

The Empire State Building has been named by the American Society of Civil Engineers as one of the Seven Wonders of the Modern World. The building and its street floor interior are designated landmarks of the New York City Landmarks Preservation Commission. After the World Trade Center was destroyed in the September 11, 2001 attacks, the Empire State Building became once again the tallest building in New York City and the second-tallest building in the United States, after the Sears Tower in Chicago.

Despite the appearance of taller buildings throughout the world over the years, the Empire State Building, born in the aftermath of the Stock Market Crash and the beginning of the Great Depression, has remained an icon of the American spirit and the nation's ingenuity.

Though not as flashy as the nearby Chrysler Building, or as massively striking at the former World Trade Center Twin Towers, the Empire State Building presents a strong yet eloquent presence over the Manhattan skyline. Its observation decks on the 86th and 102nd floors have beckoned millions of visitors. Completed in just 410 days, the Empire State Building is an enduring symbol of the American will to accomplish great works.

The present site of the Empire State Building was first developed as the John Thomson Farm in the late eighteenth century. The block was occupied by the original Waldorf Hotel in the late-nineteenth century and was frequented by the social elite of New York.

The Empire State Building was designed by the architectural firm Shreve, Lamb and Harmon, which produced the building drawings in just two weeks, possibly using its earlier design for the Carew Tower in Cincinnati, Ohio as a basis. The general contractors were Starrett Brothers and Eken, and the project was financed by John J. Raskob and Pierre S. DuPont. The construction company was chaired by Alfred E. Smith, a former Governor of New York. 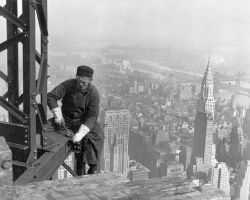 Excavation of the site began on January 22, 1930, and construction on the building itself started on March 17. The project involved 3400 workers, mostly immigrants from Europe, along with hundreds of Mohawk Nation iron workers. According to official accounts, five workers died during the construction. [3]

The construction was part of an intense competition in New York for the title of the world's tallest building. Two other projects vying for the title, 40 Wall Street and the Chrysler Building, were still under construction when work began on the Empire State Building. Both would hold the title for less than a year, as the Empire State Building had surpassed them upon its completion, just 410 days after construction commenced. The building was officially opened on May 1, 1931 in dramatic fashion, when United States President Herbert Hoover turned on the building's lights with the push of a button from Washington, D.C.. 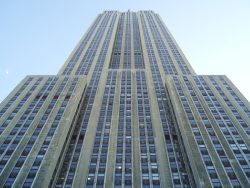 A series of setbacks causes the building to taper off with height.

The Empire State Building rises to 1,250 feet at the one-hundred-and-second floor, and its full structural height (including broadcast antenna) reaches 1,453 feet and eight and nine-sixteenth inches. The building is typically described as being 102 stories tall, although it has only 85 stories of commercial and office space (2,158,000 square feet), with an observation deck on the 86th floor. The remaining 16 stories represent the spire, which supports the broadcast antenna on top. The Empire State Building is the first building to have more than 100 floors. The building weighs approximately 330,000 metric tons. It has 6,500 windows, 73 elevators, 1,860 steps to the top floor, and a total floor area of 2,200,000 square feet.

Did you know?
The Empire State Building remained the tallest skyscraper in the world for over 40 years

The Empire State Building remained the tallest skyscraper in the world for a record 41 years and stood as the world's tallest man-made structure for 23 years. 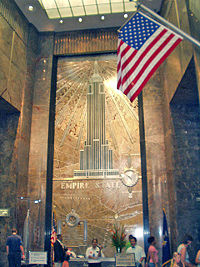 Unlike most of today's high-rise buildings, the Empire State Building features a classic facade. The modernistic, stainless-steel canopies of the entrances on Thirty-third and Thirty-forth Streets lead to two-story-high corridors around the elevator core, crossed by stainless steel and glass-enclosed bridges at the second floor level. The elevator core contains 67 elevators.

There are various setbacks in the building's design, as required by New York City's Zoning Resolution of 1916. The main purpose for the law was to reduce shadows cast by tall buildings. These setbacks give the building its unique tapered silhouette.

The lobby is three stories high and features an aluminum relief of the skyscraper without the antenna, which was not added to the spire until 1952. The north corridor contains eight illuminated panels, created by Roy Sparkia and Renée Nemorov in 1963, depicting the building as the Eighth Wonder of the World alongside the traditional seven. 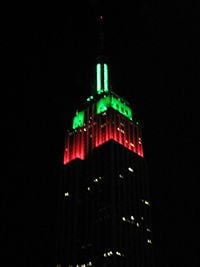 Red and green floodlights during Christmas

Long-term forecasting of the life cycle of the structure was implemented at the design phase to ensure that the building's future intended uses were not restricted by the requirements of future generations.

Floodlights illuminate the top of the building at night, in colors chosen to match seasonal and other events, such as Christmas and Independence Day. After the eightieth birthday and subsequent death of Frank Sinatra, for example, the building was bathed in blue light to represent the singer's nickname "Ol' Blue Eyes."

The floodlights bathed the building in red, white, and blue for several months after the destruction of the World Trade Center, then reverted to the standard schedule. In June 2002, during the Golden Jubilee of Her Majesty Queen Elizabeth II of the United Kingdom, New York City illuminated the Empire State Building in purple and gold (the monarchical colors of the Royal House of Windsor). After the death of actress Fay Wray in late 2004, the building stood in complete darkness for 15 minutes in commemoration of her famous role in the movie King Kong, in which the building was prominently featured.

The Empire State Building has one of the most popular outdoor observatories in the world, having been visited by over 110 million people. The 86th floor observation deck offers impressive 360-degree views of the city. There is a second observation deck on the 102nd floor that is open to the public. It was closed in 1999, but reopened in November 2005. Completely enclosed and much smaller, it may be closed on high-traffic days.

The building's opening coincided with the Great Depression in the United States, and as a result much of its office space went unrented in the beginning. In its first year of operation, the observation deck took in over a million dollars, as much as its owners earned in rent that year. The lack of renters led New Yorkers to deride the building as the "Empty State Building." 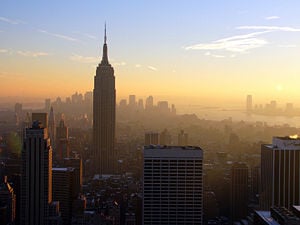 The building's distinctive art deco spire was originally designed to be a mooring mast and depot for dirigibles. The 102nd floor was originally the landing platform for the Dirigible Gang Plank. One elevator, which travels between the 86th and 102nd floors was supposed to transport passengers after they checked in at the observation deck on the 86th floor. However, the idea proved to be impractical and dangerous after a few attempts with airships, due to the powerful updrafts caused by the size of the building itself. The T-shaped mooring devices remain in place, and a large broadcasting antenna was added to the top of the spire in 1952.

At 9:49 a.m. on Saturday July 28, 1945, a B-25 Mitchell bomber flying in a thick fog accidentally crashed into the north side of the Empire State Building between the 79th and 80th floors, where the offices of the National Catholic Welfare Council were located. One engine shot through the side opposite the impact and another plummeted down an elevator shaft. The fire was extinguished in 40 minutes. Fourteen people were killed in the incident. Elevator operator Betty Lou Oliver survived a plunge of 75 stories inside an elevator, which still stands as the Guinness World Record for the longest, survived, elevator fall recorded. Despite the damage and loss of life, the building was open for business on many floors on the following Monday.

Over the years, more than 30 people have committed suicide from atop the building. The fence around the observatory terrace was put up in 1947 after five people tried to jump over a three-week span. In 1979, Elvita Adams jumped from the 86th floor, only to be blown back onto the 85th floor and left with only a broken hip. Despite security measures, the building was also the site of suicides as recently as 2004 and 2006. 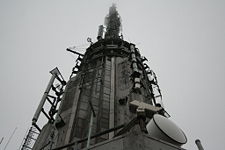 Communications devices of all sorts adorn the very top of the building.

New York City is the largest media market in the United States. Since the September 11, 2001 attacks, nearly all of the city's commercial broadcast stations (both television and radio) have transmitted from the top of the Empire State Building, although a few stations are located at the nearby Condé Nast Building.

Broadcasting began at Empire in the late 1930s, when RCA leased the 85th floor and built a laboratory there for Edwin Howard Armstrong. When Armstrong and RCA terminated their relationship, the 85th floor became the home of RCA's New York television operations, first as an experimental station and eventually as a commercial station WNBT, channel 4 (now WNBC-TV). Other television broadcasters would join RCA at Empire, on the 83rd, 82nd, and 81st floors, frequently bringing sister FM stations with them.

When the World Trade Center was being constructed, it interfered with broadcast signals and caused serious problems for the television stations, most of which moved to the WTC as soon as it was completed. This made it possible to renovate the antenna structure and the transmitter facilities for the benefit of the FM stations remaining there, which were soon joined by other FMs and UHF TVs moving in from elsewhere in the metropolitan area. The destruction of the World Trade Center necessitated a great deal of shuffling of antennas and transmitter rooms in order to accommodate the stations moving back into the ESB. 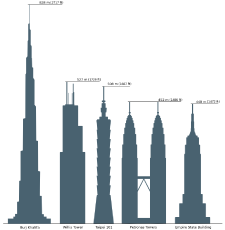 The Torre Latinoamericana in Mexico City very much resembles the Empire State Building, including setbacks and antenna. The main differences are the size and outer paneling—the Torre Latinoamericana is glass-paneled on the outside. Also of similar design are the Seven Sisters in Moscow (such as the main building of Moscow State University) and the Palace of Culture and Science in Warsaw, Poland. The Williams Tower in Houston is a glass-architecture version of the design, and the entrance on the ground floor is very similar.

The Reynolds Building, headquarters for the R.J. Reynolds Tobacco Company in Winston-Salem, North Carolina is said to be the prototype for the Empire State Building. The Carew Tower in Cincinnati, is also thought to be the basis of the tower, due to the similar design by the same architectural firm, Shreve, Lamb and Harmon Associates. Another tower thought to be an inspiration for the Empire State Building is the Penobscot Building in Detroit, Michigan, completed in 1928.

Retrieved from https://www.newworldencyclopedia.org/p/index.php?title=Empire_State_Building&oldid=1064096
Categories:
Hidden category:
This page was last edited on 31 January 2022, at 13:44.
Content is available under Creative Commons Attribution/Share-Alike License; additional terms may apply. See Terms of Use for details.